What if Russia drags West into a different theatre in Syria or Iran? Or turn Mexico into “Ukraine of US”? 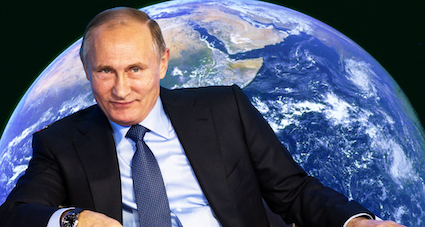 We hear that “much of the world has condemned Russia’s invasion of Ukraine.”

But the UNGA session was to “stop the war in Ukraine.” As far as I could see almost all of Africa, South America, Central America, The Middle East and much of Asia haven’t “Condemned Russia.” Even notable West’s allies —Turkey, India, UAE, Saudi Arabia—haven’t.

We hear of punitive “economic sanctions” by the world community against Russia for its invasion of Ukraine.

But there were no “economic sanctions” when the United States/NATO war machines put foot on the soil of Yugoslavia, Iraq, Libya, Syria and other countless interventions in Mali, Central Africa, Uganda, Ivory Coast etc.

We hear the pleads that the ”International Court of Justice” should put Vladimir Putin to trial.

But no such chorus had gone up on President Bill Clinton or President Chirac for the war in Serbia; the two Presidents Bush for Iraq; President Sarkozy, Tony Blair and Barack Obama for Libya; and the collective Western leadership for Afghanistan.

Russia is Nazi, Putin is the New Hitler

But the mainstream media, run by the United States, won’t bestow such acronyms to perpetrators of havoc in Afghanistan or Iraq; Libya or Syria. Where is the denunciation of genocide of Amerindians, Africans, Algerians etc ?

Russia is denounced for censorship of media. Not the West which has made Russian version inaccessible to us: in order to defend “freedom” and “democracy”! Irony just died a million deaths.

There is a mist of coloured narratives being served to us citizens. Rumour is all over us. But dare we call it “conspiracy theories.” They don’t trust us to hear alternative perspectives or judge on our own. And this we must not call “Fake News.” The champions of “freedom”, built on corpses of millions, we must believe have the interest of common people at heart.

They passed us Slobodan Milošević for a mad, crazy dictator, blood-sucking monster. The same was the terminology for Saddam Hussein. Eerily, same words are being said on Putin. No other version is heard, seen or read about. And this is not censorship.

In its sanctions, the West clearly has put its entire economy to break the back of Russia. The global surface of airlines and global shipping network is being severed one by one. Internet would be the next, broken down into regional sphere with limited or no connectivity.

But what if Russia survives this? They have already pushed Russia and China into a blood pact. What if this anti-Western bloc, including Iran and North Korea, and numerous fence-sitters like UAE, India, Brazil, South Africa,  join hands?

Russia has quite a few cards on hands to play with. Russia could really turn the heat in Syria and Iran to drag West and NATO into an entirely different sphere. What about turning Mexico into a Ukraine for the United States?

What if a war happens and a New World Order emerges? What if this New World Order plays upon the old US faultlines of “northerners” vs “southerners.” —they both have different accents, attitudes, cuisines as well as views on how the US should be. A third type of America could emerge on the western coast—your Seattle, Portland, San Francisco and LA. They are completely different from Northerners and Southerners in accent, views, culture etc. There indeed could be multiple subdivisions of America in the same way the West has created in the slavic world of Russia. There could be multiple American ethnicities.

But we can’t ponder over these possibilities for mainstream media keeps hiding us from alternative perspectives. There is a elephant in the room but their camera and microphones always evade it. The operation in Ukraine has lingered on not because Russia lacks firepower but because it can’t bomb Kiev which historically is the “mother” of Russia, its very womb. Half the mayors of the towns Russian forces has rolled in already float their flags. The truth that majority of Ukraine—two-thirds of it—is Russian. These two-thirds would always be with Russia.

From where Ukraine is getting its arms supply from West? It’s Poland which has become the logistical hub, much as Russia feared. Our CNNs and NBCs and BBCs would have us believe that Ukraine has done nothing to provoke Russia. And US, NATO and EU are merely championing “freedom” on Russia’s doorsteps. We are not allowed to remember history: That the only nation which makes the most out of European Wars, as in two World Wars, is the United States. A war in the old continent and Asia suits only a superpower located some 6,000 nautical miles away.

It’s the United States which is the main hub of mainstream media today. It’s endlessly supplying fake news. And to hell with the future of humanity.