What if women took part in the deal for farm produce? ‘Farming’ on sea offers a clue 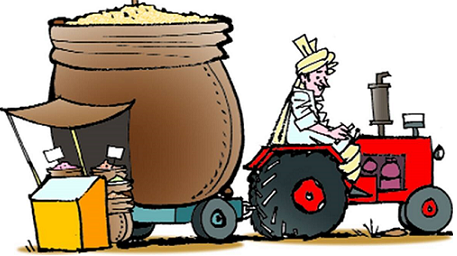 We had just joined as Junior Cadets on the Government of India Training Ship “RAJENDRA”, named after the famous Chola Dynasty seafaring King, in 1973 and were justifiably proud of our achievement – having cleared a UPSC exam at the age of 16 and headed for one of the brightest career options available then. Our Training Ship was moored off New Ferry Wharf in Bombay, and for many of us it was the first exposure to anything maritime, including the boat ride connecting the jetty to the ship.

New Ferry Wharf was a domestic boat terminal, used mostly by boats connecting islands off Bombay as well as what was later to become JNPT, the areas known as Uran, Nhava, Sheva and beyond. There was an eclectic mix of commuters, tourists, port workers and fisherwomen. Sharing the terminal were our boats as well as other Government boats, like Police, Customs and the then nascent Coast Guard.

The important lesson we learnt, by observation and as passed down by our Instructors and Seniors, was simple – at the shared floating jetty and other access points – give respect and then you will get respect, Most importantly, the fisherwomen and their boats always had right of way, as their produce was perishable so if their boats were approaching the terminal or offloading baskets full of fish – heave to and wait or find another slot.

(Unlike airplanes, boats do not have to do a “go around”, they just slow down or stop and wait it out at a reasonable distance. This is visibly apparent to other boats, bring engines ticking over at minimal RPM, telegraph to “STOP” – reduced engine smoke, no churning of the propellor and zero wake. Especially in the morning trips, when the ferry boats and fisherwomen were in a hurry to get to market, we sometimes waited it out for 3 or 4 boats.)

This never went unnoticed, and to give them their due, other Government boats like ours also waited it out in deference to those carrying fresh fish. Afternoon and evening boats, when things were easier and the ladies were returning home with empty baskets and full purses, we learnt so much about pretty much everything from those tough fisherwomen. Many of them were mothers and grandmothers, in addition to being businesspersons, and controlling the purse-strings for their families whilst the men went out on fishing boats.

India is the second largest producer of fish in the world. Fisherfolk are, also, farmers. Their farms are the oceans, seas, lakes and rivers. This is a hugely cash-up-front business, and in terms of risk, a life-and-death game every time a boat goes out. Over time, we got to know these fisherfolk well, as we also went sailing to the other side of the harbour and met their families – where we were treated like great friends. The bonds of mutual respect was the lesson as take-away.

Today some of my contemporaries are land farmers as also in the fishing industry. All over India and some in the other parts of the world. How does the “respect” quotient work out now that you are farmers, I ask them, in different parts of the world, and get different answers.

I repeat one specific example which pertains to how they are treated in the Government Mandis in different parts of India, and the response which emerged from more than a few conversations – “pardner, they treat us like shit and they make us feel like beggars”.

Beg for a slot. Part with some amount en route to an assortment of goons. Beg for an assortment of parchis (chits) all over the place. Pay for tolls and parking everywhere even if it is on the roadside. Beg for your quality check and weighment. Beg even to get your empty sacks back and receive, instead, rotten bags in return. And the whole nine yards. There is zero respect the moment your produce is on the roads. Remember the fisherwomen at Ferry Wharf, I ask them, and we go silent for a while.

In terms of lack of respect and the hassles of dealing with the Government mandis and APMCs, what sort of discounts would you give for sales at farmgate and payments guaranteed in 15 days, I asked them and this was the considered response, all figures approximate. 15%-20% discount for farmgate sales, all other things like freight separately accounted for, with full respect given and taken, and a further 2% if the payment was guaranteed in 15 days. A further 2% off if 80% of the settled amount was paid instantly with the balance on quality and weighment at destination based on mutual trust.

20% is in other words the cost of giving and getting respect as well as removing the headache. Remember, the fisherman went out to sea, the fisherwoman went to the market? I used to ask the fisherwomen how much of the collections they kept after returning as their personal share and was told – 20% is mine. With the balance 80%, we run the boats, we have our home expenses, we educate the children, we put some aside, and the rest of our common family expenses.

But 20% was the cost of giving and getting respect for the fisherwomen. And therein lies a much deeper sociological lesson which another friend who is also a farmer taught me.

Which was – in farming trades where the women handle the external finances, the mutual self-respect, transactions and growth are way better. Fish and milk are just two examples, but increasingly, vegetables and fruit also come to mind. This apparently does not happen with crops like wheat, rice, cotton and especially sugarcane which are largely handled by the men.

The concept of land border towns as dusty, desolate outposts has long been glorified in literature and movies. Sea-facing ports, on the other hand, have...

When you think of Aryan, don’t forget it’s Mumbai which still lives the 26/11 nightmare