What Next? Well for a starter you won’t see Shiv Sena now criticising Centre 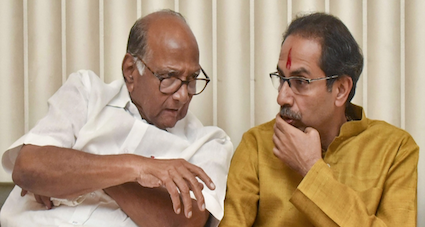 I like to address my readers; these days journalists rarely do. They are either front-soldiers of an agenda, sucking up to a politician, planting for a corporate etc, etc. The reason of course is funding and brunching with Powers. If pushed to the wall by circumstances, they resort to confusing readers. It dilutes the impact and washes the muck to the next drain in no time.

So the effort to confuse you readers is full on. Who is to blame? Sachin Vaze, Param Bir Singh or Anil Deshmukh? Or should we be disgusted with Shiv Sena, NCP or Congress? Or is it machinations of BJP?

So time to clear you head.

Police takes bribe, passes it on its seniors who park it with politicians. When politicians of different hues come together for power, the loot is shared. One calls upon their trusted policemen; others place their loyalists in power chair.

All is swimmingly well. Loot is regular. But when has greed stopped. So you look for bigger fish for bigger meal. It’s just not money. It’s also to help your prime funders, the CableWallahs, against a new network the big fish has floated. You also want to ride the tide of ripple effect it would have on nouveau riche in the vicinity. Not one bird with one stone, probably 100s.

In a distant metropolis is your Big Brother. He has been banished from the kingdom by your betrayal. He knows your game. He knows Bollywood gets dubious money. He knows dubious money could largely be defined as proceeds from drugs. He knows it has political patronage. At a cost, of course.

In one bad week, two deaths happen. Of a film star and his manager. One side says its’ a suicide; the other says murder. Both stonewall each other. Both use their agencies. The star’s girlfriend is caught, a few other film stars are also probed and shamed. Bollywood is encircled. The fire is also now threatening the chambers of by-choice Siamese Twins. The blowback happens by gagging the LoudSpeaker who is keeping the murder theory alive from his TV studio.

Now all guns fall silent. Both sides are circling the ring, warily. Suddenly, Big Brother is presented with his moment. Knowing his Junior, he knows the moment would come soon. It does. He had placed his pegs on the plot for this very moment. The Junior is on the floor.

Now begins the ritual of Sacrifices. All the pieces on the chessboard anyway are meant to be sacrificed, as long as the King is safe. The King doesn’t make fancy moves. It only goes right or left; forward or backward on a chessboard. But going forward has a problem: Once you move ahead, you could be attacked from behind. So King prefers to be stationery, with his back secured. And enough pawns in front.

First goes the piddly cop. Then goes his superior. The fire would surely now reach higher. The by-choice Siamese Twins are both threatened. It’s time to end bonhomie; high-time to save self. Both make moves to protect self. One knows the Cops are seen as his; the other with his politician in seat.

What do you think are the next moves from three main players in this game: The Big Brother, the Younger one and the Politician? The ball presently is in Politician’s court. He won’t dismiss his lackey in a hurry. He would have to go but there would be a committee set up to “probe” if he is guilty at all. The Siamese Twins would be all smile in public.

But then there is Big Brother. He has more than one ace up his sleeve. The Younger one knows it. Probably the politician too.

If my reading is right, you won’t see Big and Younger brother at each other’s throats in the next episode of this drama. Younger brother, most likely, would fall in line. Between political survival and swallowing ego, the choice is no-brainer.

Distancing between the two Siamese Twins would grow. Till one day they are separated. After all,  none of them would let go on the loot. And one would have to after this episode. The pawns you have been using you can’t use any longer. Your temporary trust between each other is out of the window. You would be wary if the other is trying to checkmate you. You would try to pin the other down before the latter does the same to you.

Those in power would stay in power. For the moment. King isn’t threatened yet. He relies on legal labyrinths. He trusts the shameless media to do his bidding. And that is to confuse you, the readers. In the hope,  you would forget all till the next election beckons.

But you would be damned if this unholy alliance in Maharashtra doesn’t pay its price. If they are still able to hoodwink you. If you still see them as your saviours. They are self-serving, you are just a conduit. Reserve all your anger and disgust at media too for its a tool to brainwash you. But don’t throw up your hand on Big Brother yet: His goals are honourable. Yet he also knows if he is sucked into the Spider’s Web, he would be gone. So, he would encircle it, parry it, pierce it, make tactical strikes but would never be sucked into it.

This Big Brother knows Home-we-call-India need be secured both externally and internally. Both are linked too. He has secured the borders. The Enemy Within is difficult to hang out to dry as you could, say, a China or a Pakistan.The Enemy Within is your own flesh, though rotting. It can’t be a “surgical strike” to deal with him. It needs a slow sucking out the poison. Suck the life out of the prey before you swallow it. So don’t be impatient if the Big Brother appears a bystander; be patient with moves only he knows. He only has the good of India and Indians in mind.