What Pranab da wanted us to pay heed to on Hedgewar 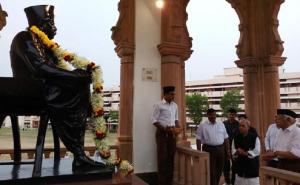 When former President Pranab Mukherjee visited Keshav Baliram Hedgewar birthplace in Nagpur on Thursday, he must have known better than the lies of TheWire that the founder of the Rashstriya Swayamsevak Sangh (RSS) was subservient to the British interest in freedom struggle.

Pranab da must have been aware of Hedgewar’s role in the Non-cooperation Movement which sent him for a year’s rigorous imprisonment but not before he said the following in the court on August 5, 1921: “…What obtains today is a regime of usurped authority and repressive rule deriving power there from. The present laws and courts are but handmaids of this unauthorized regime.”

The sagacious political statesman must have known better than his junior Congress colleague Anand Sharma that RSS hurt the freedom struggle by playing no part in the Quit India Movement.

Pranab da must have lent an ear to Congress’ own Aruna Asaf Ali in the past who had revealed in an interview that RSS Delhi sanghachalak Lala Hansraj Gupta gave her shelter in his own house during the 1942 Quit India movement. Or that prominent Congress men like Achyutrao Patwardhan, strong RSS critic Sane Guruji were all kept safe in the homes of sanghachalaks/swayamsewaks. Be it food, safety or illness, RSS stood like a wall in safeguarding a few Congress leaders still out in open in 1942.

Pranab da must have been disgusted by the assertion of Professor and Indian Express edit-page writer Shamsul Islam that if RSS was fighting Quit India movement, its’ leaders ought to have been in jail. Pranab da must have known—what everyone knows except liars–that RSS has always been a social, and never a political organization. RSS had worked it out perfectly that Quit India was a hasty agitation bound to fail—and would only hasten the Partition. Why, RSS didn’t take part even in the Hindu Mahasabha agitations in freedom struggle!

Pranab da must have known better than a report in The Telegraph that Hedgewar had asked RSS to “consider the Bhagwa Dhwaj” as their national flag in 1931; the same year when the Congress Working Committee, which included Moulana Abul Kalam Azad, itself had recommended Kesari or Saffron colour for the national flag!!!

Pranab da must have been aghast at his colleague’s assertion that Bharatiya Jana Sangh sided with the British for the former wasn’t even around when the British left Indian shores, having been formed only in 1951!

Pranab da must have simmered at chicanery of his former Congress colleagues, applauding the “pluralism” of Congress when it’s no longer the original Congress which exists today. The real Congress was over in 1969 itself, half a century ago, when Indira Gandhi caused the split. The present Congress is an expanded version of Indira Congress only.

Pranab da must have found his conscience wounded for Congress came into being by a foreigner, AO Hume, only! And that Congress didn’t want complete independence from the British rule till as late as 1929 !

Pranab da must have been moved to term Hedgewar as the “great son of Mother India” for all RSS men, from its inception in 1925, had to take a pledge before joining the organization: Desh Ko Swatantra Kar (Free the Country).

When Pranab da visited the very place where RSS was founded and said “Today I came here to pay my respect and homage” to Hedgewar, he wanted his countrymen to brush up their information on the great man: That he refused to accept sweets on Queen Victoria’s coronation day in his school; that he was expelled for exhorting students to say “Vande Mataram” in high school; that he threw at bomb at a police station while still only 18; that his revolutionary activities expressed itself in Anusheelan Samiti.

If neither Pranab da nor Hindu ideologists hold any merit for these shameless critics, they would do well to pay heed to one of their own: the well-known Communist leader, Late EMS Namboodirapad himself: “Dr Hedgewar was a nationalist.” This ought to shut them up. (But you and I know, they won’t).