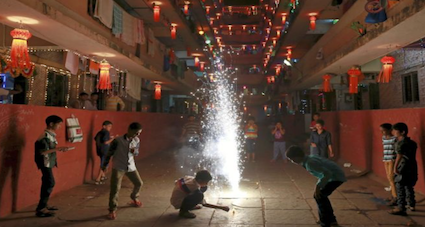 This was air quality in and around the National Capital Region of India and North India on the morning after Diwali.

(Declaration : I have been opting out of NCR around this time, relentlessly, for the past decade and more. My easy options by way of available resources were and are urban peninsular and urban coastal India, and over the last decade or so, semi-urban and rural coastal West Coast India.)

So why did the fire-cracker ban, by all means one of many reasonably sensible steps to try to reduce air pollution in North India, fail so miserably?

The answer is simple – people are not fools. People do not like being dictated to be other people who think they are “too smart”. Here I must pause and explain to people who do not understand – referring to someone else as “too smart” is a pejorative in many parts of the world. Most of all – people do not like to be the subject of unfair dictats by visibly corrupt governments – and the result is outright defiance.

Northern India, regardless of anything else, has centuries of defiance against unpopular regimes built into its core DNA. Simmering below the surface, it shows up every now and then, initially as a signal and eventually as action. Governments job is to govern, not to rule, and that is the message which Diwali’s firecrackers have sent across to an assortment of deaf people.

People see all around them what causes air pollution and worse. Farm stubble fires are one reason, for which solutions exist, but implementation of those solutions in North India is mired in conspiracy theories of which there is no shortage. But it is the cause-and-effect up front and visible in our urban areas which are the real localised causes – and people see that governance, such as it were, is hand-in-glove with those real causes.

Most of all, it is this attitude that a vulnerable middle class is to be punished because they are easily trapped on the roads, which creates this sort of a situation where fire-crackers become a symbol of resistance to unjust implementation of what is visible to all as real reasons for air pollution in and around North India. Diwali and fire-crackers come once a year, but the real reasons – generators on roofs of buildings, a lack of transparency in moving forward with renewable energy options, and the sheer unfairness of targeting one particular religious activity whilst letting the others off in the name of votes, is why we see rockets in the sky.

They are not just lighting the way to Heaven for our ancestors after a month of remembrances, common to Indic and Sinic cultures, but a way of telling mis-Governance, be who they may be, that unfairness in mis-Governance, has a habit of being refuted by North India in many different ways.

And Diwali is also a show of power where good slays demons.

On the eve of Diwali, the people of Goa celebrate the victory of Lord Krishna over the demon king Narkasur. Effigies of the demon Narkasur are paraded on the streets before being burnt…to commemorate the occasion, competitions are organized and prizes are awarded before the effigies are reduced to ash.

On this day, Diwali early morning, a paper made Narkasur (demon) filled with grass, wastepaper, crackers and more, is taken out and to the accompaniment of taunts and insults, burnt and cremated.