Why do we waste our time on Rahul Gandhi? And for how long? 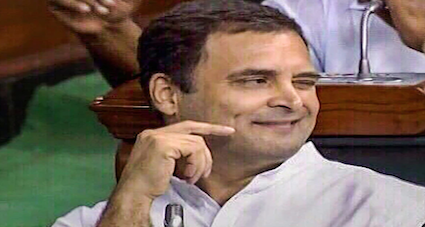 I often think why do we waste our time on Rahul Gandhi.

He is a failed politician, irresponsible leader, whimsical, untruthful, arrogant and often works at cross with India’s best interests.

There is little those on his side who could throw a convincing counter in his favour yet he cruises as if the shortcomings I have mentioned are not slabs but rafts propelling him towards a destination we all know is headed for an iceberg.

These rafts are the bootlickers who make up his party; media who use him as the First Commandment of their existence; and Muslims who gave him refuge after Amethi.

His pathetic electoral records haven’t mattered; Assam and Bengal and Kerala and countless other states have thumbed him down but he appears Alexander to the above three forces I have mentioned.

One of course could successful guess the compulsion of Mouses, Media and Muslims: First, knows no life outside the rat-hole but for crumbs on floor; Second, so servile they haven’t written a piece in anger on Gandhis in last two decades; and Third, who are fooled into believing he is the only counter to rising Hindus.

But these alone don’t make up nation. Many thought his parleys with Chinese and Pakis were at inopportune times; he risked national security on Rafale; and in Covid, the crisis of a century, he was flippant in putting hurdles at every step. That a majority in this nation reject him is borne out in successive mandates of the nation.

Yet a select few work at his behest. Against the view of majority, and thus of India. They are working at cross-purpose to India’s interest. It could only be out of greed or compulsion.

Greed, you probably could work out. Compulsion, you probably can’t for it requires reading history books you don’t find on shelves and in library. These are the masters of Financial Planet. If you control money, you control every life on this planet. Western or Indian media are just two sides of the same coin. Whoever is propped up is not allowed to sink. And you could waste your life fathoming what makes a person this powerful: Unquestioned, unopposed, unobstructed.

This man comes short on every ideal he espouses: Secularism (look at his communal tie-ups in Bengal and Assam elections); Democracy (his party can’t even have internal elections); Human Rights (not a drop of tear on Bengal post-poll violence). Yet he continues to be the default position of these forces I have mentioned.

For how long? Perhaps long enough. His party could have 40-50 seats in successive general elections but that’s good enough to bring India to its knees. India’s reputation is sullied; its police and army are demoralised and India is left unsafe at the two sides of its borders.

The trouble is, people who could show him the mirror won’t do so.  All he peers into is Rahul said so, Rahul did so, Rahul is future. He is not India’s future. Would never be. There is no redemption. He is in a wonderland—and it doesn’t go by the name: INDIA.