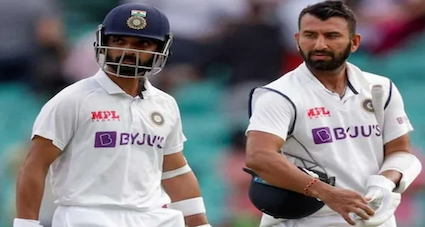 If you are in the corner of Cheteshwar Pujara and Ajinkya Rahane you would bat for them: Both only 33 in age; both have played a fair chunk of their matches in SENA (South Africa, England, New Zealand and Australia)—39/95 for Pujara and 37/82 for Rahane—and for next year and a half, India is going to none of these war zones. Don’t they deserve a dollop of gratitude for mending India’s reputation abroad and fill their gunnies in home matches?

If you see them villains in the Rainbow nation—both left in Wanderers and Newlands within a minute of each other—then anybody but them. Does Pujara have the flamboyance which at least on home pitches you need from number 3? And Rahane’s home average of 35.74 from 32 Tests is measly even in familiar turfs. Who are we backing when Hanuma Vihari and Shreyas Iyer look good bets in middle order?

Now that cricket is run by politicians, even if they come in cricketing whites, it’s not too much to hope for similar pragmatism: Bench them at home, play them in SENA. Meanwhile, ease your Ruturaj Gaekwads, Venkatesh Iyers and Devdutt Padikkals in A tours and see if they could transcend white ball cricket like KL Rahul has done.

Such is the class of two others in their 30s—Rohit Sharma and Virat Kohli—that you could keep counting the spoils from the loots of home pitches for next year and a half. Your premium pacers could flop on lounge chairs and let spinners collect their candies. You could toss a coin between Umran Malik and Prasidh Krishna; or Varun Charkavarthy and Washington Sundar and you’d still be alright. Hopefully, they would be counted as Jhye Richardson and Scot Boland have been in Australia.

Now here is the thing. All the seven new faces I have mentioned have 66 first class matches between them. They look good but they are still wet behind ears. A Boland breaks through after 81 first class games. Pujara and Rahane spent many seasons in dump venues to be where they are. Your Bumrahs and Shamis; Sirajs and Thakurs, all have over 50 first class matches. Even KL Rahul would be over 100 first class matches in a season or two.

All this tells you, going forward, experience would still matter in India’s Test fortunes. With or without Pujara and Rahane, there would still be turbulence in Indian cricket. Experiment yes but give your investments a long rope. Co-opt Pujara and Rahane in your future plans, have a word. There could still be a good kick or two in a dying dog. Mayank Agarwal has done as good or as bad as them in this series. You can’t be bewitched by the youth; and consumed by the dislike for old if evidence of this 3-Test series matters.

By god, it was a riveting series. Batting was serious, ugly business. Some gospels of the game are for all seasons. None of the South Africans hit a hundred, India had two, yet we were the losers because they were stitching 30-40 run stands all the time. Bumrah and Shami bowled at a better economy than Rabada and Jansen which could mean one or two things: Ours didn’t attack enough or theirs with willow had a better sense of their off-stump.

Yet we must rejoice if Test cricket is creeping out of a hole. South Africa is rising, Australia is in pink health, Pakistan is riveting, India has its swagger and mark my words, Sri Lanka and Bangladesh would be no pushovers, buoyed as they are by their Under-19 inductions. West Indies is still iffy and New Zealand could worry if overworked Southee and Boult are showing age.

In general, teams all around are having a good bunch of fast bowlers which excites the uninitiated fans even if connoisseurs would spend an afternoon on the flight and dip of a spinner over a coffee long gone cold.

The year has begun with my love for the game restored. Only if the blade-runners could set the DRS in order!