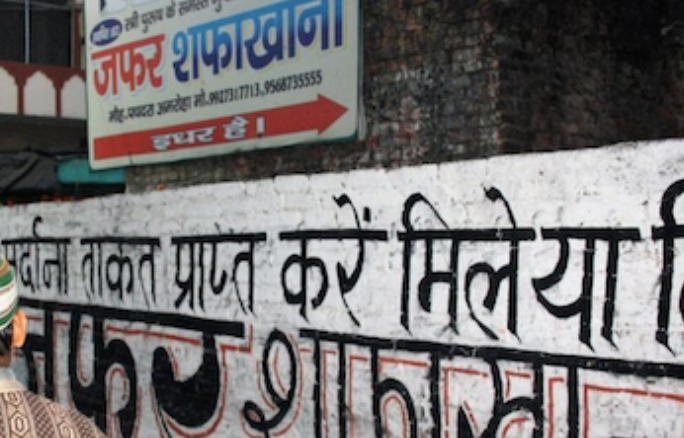 Returning to Dehlee by train in daylight hours is like stepping back in time to the Mughal days – when random palace intrigue episodes and “hakims” from a particular persuasion were famous for first turning the palace males into blubbering idiots by a variety of means which also included their sexual wellbeing – and then promising to restore their lost manhood to the presumed past glory. The abject departure of Wajoo of Lucknoo – Wajid Ali Shah of Aawadh, him of the left nipple display and large number of wives  – to Garden Reach and thereabouts in Calcutta, where many of his wives left him in rapid succession, points to what really caused the end of the Mughal Empire. There were, simply put, very few Mughals left standing in a manner of speaking and the Gora Sahib grabbed as many Begums as they could.

This had changed after 1947 to some extent, when the walls of the usually unplastered houses near railway lines would have crudely painted signs exhorting you to reach out to such and such expert for locating a suitable – and presumably dowry laden – bride in a day and age when the male/female ratio was skewed against the more numerous females. All this has changed now, there are far too many males for fewer females in North India for whatever reason, and the ladies as well as their family members are known to discreetly find out if the prospective groom, currently running 6 males to 5 females or thereabouts, can even perform or not.

In addition, as the train I am on pelts through Rajasthan, one can see a visibly higher presence of women in bright coloured clothes doing whatever that family, farming and life demands of them. Out on their bicycles, motor-cycles, scooters, tractors, just like one observes in Peninsular and North-East India. (Question – the North-East is further East of Eastern India. Can anyone try to explain this to me please?)

So what does the train show me as soon as it enters Uttar Pradesh, and then Haryana?

Take a closer look at the signs. All of them mention only one thing – male sexual medical issues and claims therein.

These are more than signs along railway lines. These are signs of the times for the NCR region. I would like to know from readers if such signs are spotted elsewhere in India also, in such heavy profusion?

The concept of land border towns as dusty, desolate outposts has long been glorified in literature and movies. Sea-facing ports, on the other hand, have...

When you think of Aryan, don’t forget it’s Mumbai which still lives the 26/11 nightmare