Why Mainstream Media wants to keep you ‘uneducated’ 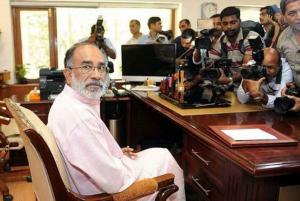 There is a good reason to believe that mainstream English newspapers in India keep masses uneducated. Most of it stems from bias. A lot has also to do because journos themselves are uneducated. They can’t speak or write on any subject coherently. At best they are quote-renters. At worse, remotely controlled by compromised bosses, politically aligned. The whiff of money and power also keeps them drugged.

Look at the data issue currently clouding our mornings. Aadhaar of course is unpalatable to these journos. In the name of data breach, for months at end, the mainstream media is trying to discredit it. So when Union Minister of State, KJ Alphons made a spirited defence of it, Hindustan Times on its front page accused him for kicking up a “fresh row.” The stable of Times of India called it “bizarre.” Indian Express buried it on Page 10.

What Mr Minister has done is to ask a few simple questions:

A sensible and responsible media ought to have reflected and posed these questions to its readers in response:

Yet, all we get is the minister being accused of being “bizarre” and “kicking up a row.” Row? Who’s in opposition? Obviously the mainstream media itself is offended and nobody else.

Never would you see an English mainstream media applauding Aadhaar for ostensibly eliminating fake subsidies, throwing out middlemen out and; securing direct subsidies to poor and needy. Damn it, I would let government put every bit of me under a scanner if the rampant corruption could be rooted out.

Those in support of corrupt practices are obviously corrupt. The implication is clear for mainstream media. Yet in the name of privacy, they are using hammers and axes of lies everyday to dismantle Aadhaar. And to keep us “uneducated” on Aadhaar’s overwhelming benefits.

Since “data breach” is the current flavour, in the wake of Facebook outrage,the English mainstream media has gone berserk on the NaMo App. Indian Express has spilled over columns and pages in ugly multi-layered headlines on NaMo App to convey private information of its users are being passed on to US companies. This has followed on Rahul Gandhi claiming that the Prime Minister is “spying” on “personal data” of users.

The attempt clearly is to hijack the current outrage over Cambridge Analytica’s alleged data theft of Facebook users. Yet English mainstream media would hide the most logical fact from its readers and indulge in hysteria.

Readers ought to be aware of a very common tactics used by these presstitutes while running down BJP and Prime Minister Modi.   Whenever a valid accusation is made by BJP against its opponents—like the engaging of Cambridge Analtyica by Congress—a counter allegation is hurled at BJP and the headlines in newspapers next day read: “BJP and Congress trade charges over Analytica.” This is the same tactics presstitutes use when BJP workers get killed in Bengal or Kerala. Opposition are nudged to similar allegations in return and newspapers next day report: “BJP and Left trade charges on political murders.”

The only option left with the neutral citizens of this country is to call out this “fraud” of the presstitutes. Keep hammering away at their moral credibility till they are left without even a fig leaf to cover their shame.

And keep informing their mistruths to unsuspecting readers who pay for being told lies.