Why Modi won’t leave Putin’s side 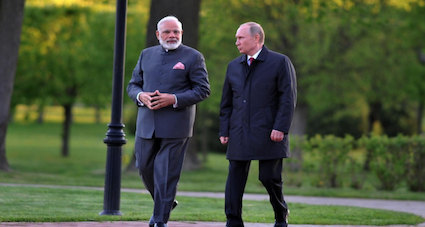 Throughout the ongoing Ukraine crisis, the government in India has carefully avoided taking an unequivocal position. It has abstained on every United Nations resolution dealing with the matter and refused to join the international community in economic measures against Moscow, prompting a warning from the US over potentially circumventing sanctions.

Even statements from India condemning the reported mass killing of Ukrainian civilians stopped short of apportioning blame on any party, instead of calling for an impartial investigation.

In considerable part, India’s decision to avoid taking a clear-cut position stems from a dependence on Russia on a host of issues – diplomatic, military and energy-related.

From a strategic standpoint today, decision-makers in New Delhi believe that they can ill afford to alienate Russia because they count on Moscow to veto any adverse United Nations Security Council resolution on the fraught question of the disputed region of Kashmir.

Harking back to the days of the Soviet Union, India has relied on Russia’s veto at the UN to protect itself from any adverse statement on Kashmir. For example, during the East Pakistani crisis of 1971 – which led to the creation of Bangladesh – the Soviets protected India from censure at the UN, vetoing a resolution demanding the withdrawal of troops from the disputed region.

In all, the Soviets and Russia have used their veto power six times to protect India. India has not had to rely on Russia for a veto since the end of the Cold War. But with tension over Kashmir still high amid sporadic fighting, New Delhi will want to ensure that Moscow is on its side should it come before the Security Council again.

In large part, India’s close relationship with Russia stems from Cold War allegiances. India drifted into the Soviet orbit mostly as a counter to America’s strategic alliance with Pakistan.

India is also hopeful of Russian support – or at least neutrality – in its long-standing border dispute with the People’s Republic of China. India and China share a border of more than 2,000 miles (near 3,500 kilometers), the location of which has been contested for 80 years, including during a war in 1962 that failed to settle the matter.

Above all, India does not want Russia to side with China should there be further clashes in the Himalayas, especially since the border dispute has again come to the fore since 2020, with significant skirmishes between the Indian Army and China’s People’s Liberation Army.

Russia as supplier of weapons

India is also acutely dependent on Russia for a range of weaponry. In fact, 60% to 70% of India’s conventional arsenal is of either Soviet or Russian origin.

Over the past decade, New Delhi has sought to significantly diversify its weapons acquisitions. To that end, it has purchased more than US$20 billion worth of military equipment from the US over the past decade or so.Nevertheless, it is still in no position to walk away from Russia as far as weapons sales are concerned.

To compound matters, Russia and India have developed close military manufacturing ties. For nearly two decades, the two countries have co-produced the highly versatile BrahMos missile, which can be fired from ships, aircraft or land.

India recently received its first export order for the missile from the Philippines. This defense link with Russia could be severed only at considerable financial and strategic cost to India.

Also, Russia, unlike any Western country including the United States, has been willing to share certain forms of weapons technology with India. For example, Russia has leased an Akula-class nuclear submarine to India. No other country has been willing to offer India equivalent weaponry, in part over concerns that the technology will be shared with Russia.

In any case, Russia is able to provide India with high-technology weaponry at prices significantly lower than any Western supplier. Not surprisingly, despite significant American opposition, India chose to acquire the Russian S-400 missile defense battery.

It isn’t just India’s defense industry that is reliant on Moscow. India’s energy sector is also inextricably tied to Russia.

Since the George W Bush administration ended India’s status as a nuclear pariah – a designation it had held for testing nuclear weapons outside the ambit of the Nuclear Nonproliferation Treaty – India has developed a civilian nuclear program.

Although the sector remains relatively smallin terms of total energy production, it is growing – and Russia has emerged as a key partner. After the US-India civilian nuclear agreement of 2008 allowed India to participate in normal civilian nuclear commerce, Russia quickly signed an agreement to build six nuclear reactors in the country.

Neither the US nor any other Western country has proved willing to invest in India’s civilian nuclear energy sector because of a rather restrictive nuclear liability law, which holds that the manufacturer of the plant or any of its components would be liable in the event of an accident.

But since the Russian government has said it will assume the necessary liability in the event of a nuclear accident, it has been able to enter the nuclear power sector in India. Western governments, however, are unwilling to provide such guarantees to their commercial companies.

Away from nuclear power, India also has invested in Russian oil and gas fields. India’s state-run Oil and Natural Gas Commission, for example, has long been involved in the extraction of fossil fuels off Sakhalin Island, a Russian island in the Pacific Ocean.

And given that India imports close to 85% of its crude oil requirements from abroad – albeit only a small fraction from Russia – it is hardly in a position to shut off the Russian spigot.

US Secretary of State Antony Blinken recently noted that India’s “relationship with Russia has developed over decades at a time when the United States was not able to be a partner to India” and suggested that Washington was prepared now to be that partner.

But given the diplomatic, military and energy considerations, it is difficult to see India deviating from its balancing act over Russia any time soon.

(This piece is taken with gratitude from The AsiaTimes).