Why Muslims owe a lot to Sardar Patel 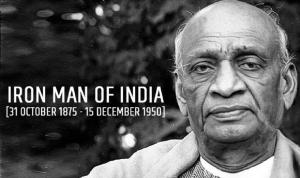 This is the centenary of the year when Sardar Vallabhbhai Patel first met Mahatma Gandhi and India got its unifier as we know the nation today. His birth anniversary, which falls this week, was all but erased from public memory under the Congress continuance and the media/academia which controlled the public narrative. It’s only now that the man is being pulled out of history’s dusty racks.

History bears testimony how the birth centenary of Sardar Patel on October 31, 1975 was blocked from public consciousness by the dispensation of Indira Gandhi and the media/academia cabal. Contrast this with Pt. Jawaharlal Nehru’s who was festooned all over India in 1989 during his birth centenary.

You have Marxist historian Romila Thapar pointing out Sardar Patel’s role in reconstruction of legendary Somnath Temple after Independence, an act of communal and not secular ideals of India by inference, though how Nehru pushed the passage of the Haj Committee Act in 1959 is better not questioned.

Congress loses no time in terming Sardar Patel as its own, and couldn’t care less about your protest that the “Iron Man” got Bharat Ratna only 44 years after India’s independence. Try telling them that no less than three Nehru-Gandhi icons were decorated with India’s highest civilian award in between (two of them, Nehru and Indira, while they were still alive). A few awardees in between, while Patel was kept in the storeroom, could be suitably embarrassed.

All this while Patel’s has been nuanced into an anti-Muslim persona. Be it agenda-driven websites which have mushroomed lately; the known Left’s stable such as The Hindu/Frontline or NDTV, and mainstream media, Patel’s legacy has suffered in their hands. The man deserves truth even if respect eludes him from the indifferent amongst us. Sardar was no less than Bismarck—but India hasn’t been a match to Germany in gratitude.

The anti-Muslim narrative must seize our immediate attention. BJP has been tireless in pointing out Sardar’s role in India’s unification. It’s been easy for the Indian ecosystem to club the two and project it against Muslims of the country. One, it establishes their “secular” credentials and two, it kind of helps in explaining their willful neglect of the towering Sardar.

The one unethical method the intelligentsia adopts is to take a quote out of its context and use it to buttress its agenda. We have Rajmohan Gandhi writing in “Patel A Life” (P. 426) that “He (Patel) was unquestionably roused more by a report of 50 Hindu or Sikh deaths than by another 50 Muslim deaths.”

Another by Rajmohan Gandhi: “…Patel could not get over his anger against Muslims whom he held responsible for the Partition; they had brought this tragedy not only upon themselves but also on others.”

Patel has been blamed for introducing the Permit system which didn’t allow Muslims to claim their Indian citizenship even if they had gone to Pakistan for a visit after August 15, 1947. He is also burnt at stake for slapping the Evacuee Property Law which meant the absorption of movable and immovable assets of Muslims who chose to leave for Pakistan. In both the instances, it was in retaliation to similar moves made in West and East Pakistan but such logic is usually lost in wilderness.

Quite a few of Sardar’s utterances are cited to hold him guilty of anti-Muslim bias. There is this speech in Hyderabad, just two months before his passing away in 1950, where he said: “I naturally begin to doubt whether Muslims here feel that their future lies in India.” (That his next sentence condemned some Hindus for celebrating Gandhi’s assassination, is studiously avoided). (Chopra, P.N., The Sardar of India, p.150.)

There are these words of Sardar’s in Calcutta (now Kolkata) in January 1948:  “The Muslims who are still in India, many of them helped in the creation of Pakistan…They (now) say why their loyalty is being questioned.”

When Pakistan invaded Kashmir, the same month, he addressed Muslims in Lucknow, thus: “I want to tell you frankly that mere declaration of loyalty to the Indian Union will not help you in this critical juncture…those who want to go to Pakistan can go there and live in peace.”

Contrast these words with the actions Patel took vis-à-vis the minority communities. He was instrumental, as chairman of the committee on minorities and fundamental rights, in allowing Muslims and Christians the right to (a) propagate their religion (b) the right to preserve their language and culture; and (c) the right to run their own educational institutions.(1)

Men like K.M. Munshi and Purushottam Das Tandon, protested that even in the 1931 Karachi session of the Congress, only the “right to profess and practice one’s religion,” and not propagation, had been allowed. But Patel would have none of it. He went by the reasoning of Christian and Muslim members that propagation of faith was central to their tenets. That’s how you have the word “propagate” in Article 25 of the Constitution. (2)

It was also Patel who gifted Muslims and Christians, and other minorities, with Articles 29 and 30, that allowed them the right to pursue their language and culture as well as control their own educational institutions. These rights are enshrined in India’s Constitution. (3)

The first Chief Commissioner of Delhi that Patel appointed was Khurshid Alam Khan. The Inspector General of the Special Police Force was a Muslim and a close confidant of Sardar Patel. In September 1947, Patel had 10,000 or more Muslims shepherded to safety inside the Red Fort. During communal violence he had free kitchens opened for them.

Many senior civil servants and police officers have left a vivid account of Patel’s sense of justice. He once rushed out in person in the middle of a night to save the Dargah of Nizamuddin Auliya. Choudhary Khaliquzzaman writes in Pathway toPakistan (P 395-396) how Patel ordered Section 144 Cr.P.C to save besieged Muslim lives.

It was in the sacred Constituent Assembly, that Patel had thundered: “…a discontented minority is a burden and a danger and that we must not do anything to injure the feelings of any minority so long as it is not unreasonable.” On another occasions he addressed Hindus thus: “If you think that you can go on constantly troubling loyal Muslims because they happen to be Muslims, then our freedom is not worthwhile.”

In 1949, the idol of Ram was installed inside the non-functioning Babri Masjid. Patel lost no time in writing to UP Chief Minister Pt. Govind Ballabh Pant that the mob must not be allowed to take law into its own hands. That the law-breakers must be met with force.

Rajaji wrote thus in “Swarajya” in 1971: “A myth had grown about Patel that he would be harsh towards Muslims. This was a wrong notion but it was a prevailing prejudice.”

In January 1948, Gandhi wrote: “Many Muslim friends had complained to me of the Sardar’s so-called anti-Muslim attitude. I was able to assure the critics they were wrong…the Sardar had a bluntness of speech which sometimes unintentionally hurt, though his heart was expansive enough to accommodate all.”

Thus here we are looking at a man who is more secular than those who employ it as a tool to push their own despicable agenda. Why would you think a man of such generosity and big-heartedness didn’t get his due from the establishment? In one short word: Nehru, his successors and the ecosystem which they spawned in their wake.