Why Saudis have formed a bloc against IS 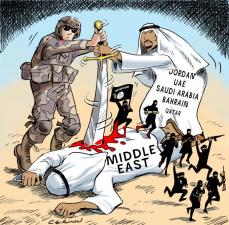 We now hear that Saudi Arabia has formed a 34-nation Muslim military bloc to crush Islamic State (IS) which is no longer a regional but a global threat.

Actually, let’s call it a Sunni coalition rather than a Muslim bloc since Shia Iran and Iraq are uninvited who, lest we overlook, are part of a 4+1 bloc including Russia, Syria and Hezbollah against the IS.

And who can forget United States who claim to be heading a coalition of 65 nations even though none of them are willing to put the boots on the ground. Indeed only 12 are providing any active role and nations such as Luxembourg, Singapore and some Pacific Islands are only making up numbers.

This against a terror group which boasts of 30,000 foreign fighters from 80 countries and despite the US-led air-strikes since August 2014, its’ actual numbers have actually doubled in this period.

While countries are falling over each other to crush IS to a pulp, US-Saudi blocs are distrustful of Russian alliance. That makes two things patently clear

US is not tired of stating that Russia’s support of Syrian president Bashar al Assad has actually caused the “civil war” to linger and led to the creation of IS.

It is another matter though that terrorists, from their early steps against Soviets in Afghanistan in the 80s, have been fostered by Saudi Arabia. In 2009, thanks to WikiLeaks, we now know that Hillary Clinton had suggested in blunt terms that donors in Saudi Arabia were the most significant source of funding to Sunni terrorist groups worldwide. Most recently the German vice-chancellor Sigmar Gabriel has accused the Saudis of funding Sunni radical groups.

Why did it take Saudi Arabia so long to shape up an anti-IS Muslim military bloc?

All this while, these remorseless terrorists have been at Saudi and other Gulf nations doorsteps. Commonsense would’ve required a prompt response. Their willful indifference, with no urgency prompted by US, actually helped IS take roots.

Saudis tolerated, if not directly promoted, IS and other terrorist groups, hoping that it would weaken the Shia presence in the Middle East, giving them a stranglehold on phenomenal oil and gas reserves, and by extension on the region itself.

Russia’s intervention in Syria upturned this game on its head. The funding and arming of IS was now a question in public space. Most tend to believe that it’s Turkey which buys up the stolen oil from IS. World came to know of “good terrorists” as defined by the US for whom it was willing to spend $500 million. It also learnt that among these “moderate’ terrorists were actually al-Nusra or formerly Al-Qaeda of the region itself!

The shooting down of Russian jet SU-24 showed Turkey’s desperation. Years of machinations in the Middle East by Turkey, Saudis and US, was going up in smoke. Before Russia could walk away with all the credit and emerge as world’s saviour, before their complicity was ripped open in public view, US-Saudi-Turkey had to wake up to the reality.

It’s an acute fact that IS, and other terrorist groups, can’t be smashed till there are boots on the ground. Russians have an advantage in this regard since Syrian army, Iraqi and Hezbollah forces are all mopping up to the pounding they are delivering on IS from the skies.

Now this Saudi-bloc, apparently with the blessing of US, would like to have its own boots on the ground. Their desperation is also palpable since Russia essentially owns Syrian skies today. The air passage no longer is free to them.

So essentially, the Saudi-bloc has emerged to provide boots on the ground.

Initially, Americans provided arms and advisers to Kurds to kill off IS fighters. But it’s a painful realization lately that Kurds are more interested in securing the area they perceive to be their homeland. They have little interest in reaching out to vast swathe of territories in Iraq and Syria.

To expect Turkey to don the role was foolish even though lately its men and arms have entered northern Iraq. It’s more likely that they intend to cream off a dis-integrating Iraq for themselves rather than push for the US-Saudi cause.

The world generally would be happy to get rid of IS and terrorism rather than worry about apportioning blame on its creators. But the real worry is that anti-IS coalitions are distrustful and sworn enemies between themselves. With almost entire world descending in Middle East, miscalculations and hotheads could still bring the world to a grief in the form of World War III.