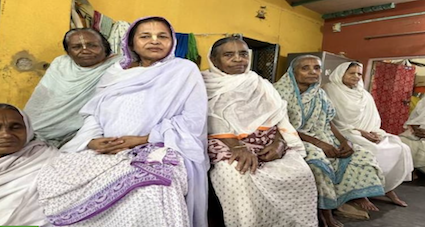 An interesting shift is happening in Vrindavan, the Hindu holy town where pious pilgrims arrive to do the temple circuit and purify their souls.

From their shelters on the banks of the Yamuna, widows are slowly, yet steadily, returning home following calls from their grandchildren, seeking to revive the intimacy with grandparents that once existed in Indian families.

What is interesting is that this is the new generation of the same family that had once cast them out to Vrindavan for a life of prayer, measly meals, and poverty.

Locals say this reverse migration started when many widows left during the pandemic and never returned. That was a big exodus — the total number of widows shrank from an estimated 7,500 to 3,000. It currently hovers between 1,500-2,000.

Some of the widows who had left during the pandemic wrote to the managers of their shelters (read ashrams) that they were feeling completely comfortable with their family, rediscovering relationships rooted in what they claimed were unconditional love, acceptance, and family rituals.

“They said they might visit again for the love of Krishna and Radha, but would not stay permanently,” said Krishna Kumar, who works for a widow home supported by the Sulabh Trust.

The push is from the grandchildren, even great-grandchildren, who strongly feel that grandparents, especially grandmothers, are the best bridges back to old lands, languages, and cultures.

At a widow’s home close to a temple, Dipali Nath sits with a smile on her bed, holding wedding photos of her grandchildren. “I attended two weddings. My grandchildren feel my presence is a wonderful connection to their past. This is a different time. I told them I will keep visiting Vrindavan but will live with them,” she said.

Nath says she took photographs with her grandchildren and jokingly told them Vrindavan was the town with the lowest per capita selfies in India. Because you risk losing your phone to marauding macaques perched on rooftops, who may snatch away your device. So she never takes out her handset, Nath told her grandchildren.

Rupali, one of her grand nephews, told this reporter in a telephonic interview from Kolkata that Nath’s presence in the family was a godsend. “The entire family wept when said she was going back to Vrindavan. But she told us that she will be back soon. We do not want to hear about widow homes anymore. This is so, so, depressing, and more so when we hear that one of our relatives is there,” she said.

Sona Haldar, from Nohona village in Bengal’s Burdwan district, says that the widows do miss their families when they return to Vrindavan, but they have Radha and Krishna.“ We are in good company and we are not in distress,” Haldar said, adding that the widows had faced tough times as they lived on handouts, but now there was unadulterated love from the family.

Rani Das, who traveled from Malda to Vrindavan more than 25 years back, says: “I once left my home in pain, but now I have no regrets. I am happy at Vrindavan and also at home. I have found a new life.”

Gayatri Devi, another widow, says the grandkids are not calling her back because her children want her to provide unpaid childcare.

The number of residents at almost all widow homes has shrunk. A huge widow ashram of 1,000 beds, constructed by the Yogi Adityanath, government and visited by luminaries like former President Ramnath Kovind, has only 250 occupants.

“It is not running at capacity, that is the situation with the ashrams of Vrindavan,” says Ashok Sharma, a volunteer at one of the town’s many widow homes.

“Indian families are realising that grandparents form deep bonds with grandkids and look after their wellbeing. It works both ways. The children also have a positive impact on the lives and physical health of their elderly relatives,” adds Sharma.

The widows of Vrindavan are a much happier lot today. Reports reaching this holy town from various parts of Bengal, Jharkhand, and Uttar Pradesh (UP) say the women are happy with their families. Those travelling back and forth are probably the happiest as they have the best of both worlds.

This is far cry from the times when castaway widows would travel hundreds of miles to shelters here. Many did not even know why they were traveling to Vrindavan or Varanasi. Some were sent away by their husbands’ families, who wanted to prevent them from inheriting the family silver.

In Vrindavan, they found shelters where they lived in poverty and neglect. They sang bhajans for a gruelling six hours every day and lived off alms and charity.

It was not a life of honour, but the widows say they immersed themselves in Krishna, the divine lover. Krishna was born in Vrindavan, according to the Indian epic, the Mahabharata.

“Today, we are no longer unwanted baggage. Our grandchildren and great-grandchildren have changed the narrative,” says Das.

She called her great-grandson, Madhusudan, and asked this reporter to talk to him. “I do not know why she left home, my parents did not tell me anything. I do not want to know it. I only heard it was her choice. She did not go to Vrindavan to escape a brutal family. She was not unwanted baggage. I am very happy that she is back. My sister and I have pushed her to return,’’ Madhusudan said.

Madhusudan said his great-grandmother named him after one of Lord Krishna’s many names.

“She has promised she will return soon, she has gone to Vrindavan to meet her friends at the ashram, not to lead a life of pain,” he added.

Once, widows were synonymous with Vrindavan. Once, the courtyard of the popular Banke Bihari temple used to be awash with widows in white. Not anymore.

Pilgrims are no longer encouraged to visit the ashrams to give alms to the widows for spiritual brownie points.

Widows are no longer considered the harbinger of bad luck.

Maybe it is all Krishna’s wish. For everything that happens in Vrindavan is because of Him.