Would India give up Russia’s S-400 missiles for US? A fat chance under Modi 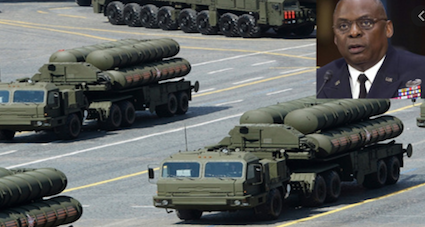 The US secretary of state Antony Blinken threatened the companies  constructing the undersea Nord Stream 2 gas pipeline from Russia’s Baltic coast to Germany that they should immediately abandon work or face sanctions.

A day earlier, the powerful US Senate Foreign Relations Committee communicated to defence secretary Lloyd Austin to raise the administration’s opposition to India the buy of Russia’s S-400 missile defence system or face sanctions under the Countering American Adversaries Through Sanctions Act (CAATSA).

How does it affects US security when two sovereign nations, India and Germany are exercising their rights as independent states. Are they vassal states of US? Such sanctions are violation of international law. But the US insists its domestic legislation is also applicable on sovereign countries. That India and Germany’s business with Russia is their business too. That’s the danger when you get into a strategic embrace with a superpower.

The US want to embed itself in Asia to counter China and its not possible without India. The trouble is, China remains the most important trading partner for many a country in Asia, including India. This besides, India relishes its strategic autonomy. It addresses its issues with China directly. India doesn’t want to be a pawn in US’ China containment policy.

Let’s say Washington fears that the Nord Stream 2 project and India’s procurement of the S-400 missile system from Russia will bring  Germany and India closer to Russia and distance them from the US. The US needs Germany for its hold in transatlantic affairs. It needs India for QUAD and all-important Indo-Pacific region.

There is this business matter too. Germany potentially is a big market for shale gas exports of US. Similarly S-400 missiles bring Russia-India that much closer. After all Russia is already in good books of India because it shares its advanced military technology with New Delhi more than Washington does.  The US wants to wean India away from Russia’s military orbit.

So this instruction by US Senate Foreign Relations Committee shows the wariness that India and China are holding sustained talks and the border tension between them is easing. And that India doesn’t appear to be the sort which could easily be bullied.

This is the paradox and the underlying theme. The US in its heart also knows it can’t dissuade India from buying S-400 missiles from Russia. India is vital for their Asia needs. But the Pentagon probably want to leverage it to sell more arms to India. After all, Austin previously worked as a board member in Raytheon. Blinken also ran a consultancy firm lobbying for big arms manufacturers.

In this context, place the developments in an around Austin’s recent visit. India’s defence minister Rajnath Singh praised his US counterpart for encouraging American defence companies to take part in Aero India 2021 in February. Austin raised the concern on S-400 missiles but went away saying the defence partnership is enhanced.

So there is little chance India would abandon S-400 missiles from Russia. All US could do perhaps is to give a slap on the wrist which India wouldn’t mind, irrespective of the inevitable noise there would be in Indian media and by political opposition.

As an aside, see through the shifting mirrors US president Joe Biden is adopting for public consumption. He held out a raft of promises that “diplomacy” is back at the centre of US foreign policy. But within its first 100 days, it’s busy weaponising sanctions and acting a bully on world stage.

The above is a rewritten version of a piece by MK Bhadrakumar in Indian Punchline).

(NewsBred has a new addition from today, Panchmukha, where we bring interesting viewpoints from across internet, give the source its due credit and rewrite it for readers’s benefit. And the spectrum is really wide from science to technology to agriculture to trade—everything).