Yogi shaming Rahul is no news for Lutyens Media: Why you didn’t read about it this morning! 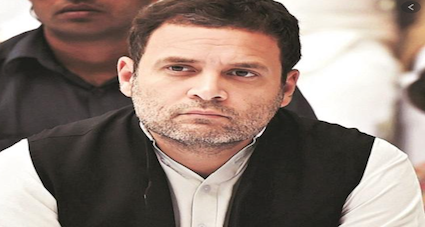 Yogi Adityanath has called Rahul Gandhi as one who has “never spoken truth in his life” and the Gandhi scion “should be ashamed of himself.”

Indian Express and Hindustan Times has blocked the news altogether this morning.

Times of India has given a headline in inside pages you won’t even bother reading: “Oppn peddling lie: Yogi”.  (Interestingly, Yogi never mentioned “Opposition”!)

NDTV carried the news but made sure the adornments Yogi used for Rahul never caught the eye of readers in the headline.

This is India’s mainstream media which front-pages Mukul Roy joining Trinamool Congress; give a double-decker headline on a Bengal bureaucrat defying Modi’s Centre; and make sure we know the names of chief ministers of Jharkhand and Chattisgarh, the States which, honest to tell, we can’t identify on India’s map.

Yet Yogi Adityanath using words never used by a high functionary against Rahul Gandhi is not a news to them.

It’s not that Rahul Gandhi has stopped being a news.

Let me give you a reality check: Search “Rahul Gandhi India Today Cover” on google and you’d be flooded by our man’s visage shown from all angles, with every expression imaginable, with titles such as “Warrior Prince,” “Prime Candidate”, “The Rahul Offensive”, “The Rahul Raj”, “Resurgent Rahul”, “The Evolution of Rahul Gandhi”, “Game On For 2019” etc etc.

I stopped counting the “Covers” after a few dozens.

This man was deemed Prime Minister-in-waiting in 2014, 2019 and dare I say for 2024 by this very media. This man, officially, completes 50 this week (June 19, 1970). He is a dynast like no-one else in India. His family is like no-one else in India. He is—and was—powerful enough to tear the papers of India’s sitting prime minister (Manmohan Singh) in the middle of a press conference in the national Capital.

Yet, this man being shamed like never before by Yogi Adityanath, inarguably second only to Modi-Shah in India’s ruling firmament, is not a news to mainstream media.

The same mainstream media which lie-in-waiting for every misstep of the UP chief minister.

The same mainstream media which knows that Yogi Adityanath holds the key to BJP reclaiming the State in 2022 and be the pivot if BJP is to make a hat-trick of wins in general polls in 2024.

This conformity, the silent consensus between India’s mainstream media, should leave us in no doubt that (a) Rahul Gandhi is to be protected at all costs; (b) And that such deference must involve a quid pro quo.

For the burying of this news can’t be a matter of poor news judgement. Yogi and Rahul are too big not to make news and more so when barbs are fired. I dare say in terms of readers’ interest, this news is the biggest today, and probably of last few days. It could be that no bigger news emerges too in coming few days.

Yet, India’s mainstream media has chosen to bury this news.

We would never know the reason for this deference.

It could be favours granted in the past; it could be obligations still pending; it could be their sheer existence dancing on the little finger of the Gandhi scion.

But showing Rahul Gandhi in poor light is a blasphemy in the unholy book of Mainstream Media; like it’s been with Sonia Gandhi who in nearly three decades of control of Congress party, one doesn’t remember, has had one bad article written against her.

If this strikes you as agenda, it must strike that you every bent, every trajectory which our mainstream media takes every morning is coloured.

For it establishes they are compromised.

That they are not working for our welfare, for the nation, and certainly not for the paying readers of its rags.

It must make you wonder how far back this unholy allegiance goes: Beyond Rahul Gandhi, Sonia Gandhi, Rajiv Gandhi, Indira Gandhi, and even till Pandit Nehru.

When every mention of theirs is rose-tinted and every wart of theirs airbrushed.

And which also is the theme with Western media.

Are Western Media and Indian Media only two sides of the same coin?

Who gets them going?

Who is the one which ensures Gandhis are never damaged and could continue till perpetuity?

What do they gain out of Gandhis which makes India’s interests malleable to them?

This is not all. The mother and son are out on bail for six years. What stops India’s judiciary in passing a judgement on them, either way?

Who is there to probe on the Memorandum of Understanding (MoU) which Congress and Chinese Communist Party (CCP) once had? Or pass censure when they go visiting Chinese embassy in India at the height of border tension?

And think of the damage: Lies, corruption, manipulation, fraud, scams etc it entails. It’s subversion of India’s electorate, the nation’s democracy when India’s “Fourth Pillar” appears in bed for so long with India’s indigenous masters.