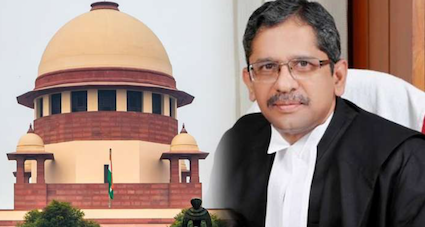 “Imagine what is the message we are sending out,” said the Chief Justice of India NV Ramana while conducting a Suo Moto hearing on the Lakhimpur Kheri incident on Friday.

The honourable judge was reacting to no arrest yet made by the Yogi Adityanath government in Uttar Pradesh on an incident which is not yet a week old.

So let’s “imagine” and think who all are receiving this “(bad) message.”

Justice Ramana must not have had grieving families of four farmers in mind for they have happily settled a deal with the Yogi government on matters of compensation, job and probe.

I am sure he didn’t mean Opposition and Media too even though judiciary has much to fear them for they could slander with “sexual impropriety” and invoke “impeachment” at will.

The My Lord then must have had the masses of this country in mind for whom he has more than once shown his concern and wished the courts were more litigant-centric.

I, being one from the masses, would certainly not want delay in justice. But Lakhimpur Kheri won’t even register in my mind which has been numbed by alleged post-poll violence in Bengal; all those rapes, killings and exodus of fleeing unfortunates which NHRC (National Human Rights Commission) has reported in horrific details.

So let’s hear again what the NHRC has reported on post-poll violence in Bengal and alleged complicity of the Mamata Banerjee’s Trinamool Congress government in the horror.

“Any extra hour that Mamata Banerjee spends in power in Bengal would be a blot on India’s judiciary…where the entire might of the governmental machinery has been used…this may well be the death knell for democracy in this great nation… It’s high time that the rot is stemmed…the nation of 1.35 billion people watches us with bated breath.”

So, I for one would have a completely different take on the “message” the apex court is worrying about. It’s that there could be little logic in Suo Moto cases taken or ignored at times, that eight lives lost could alarm our judiciary overnight but neglect on alleged victims many times more in numbers in Bengal post-poll violence could stretch for months at end; with all those hearings and further hearings; dates and further dates.

If judiciary is worried about the “message,” it should also worry about the “message” we the masses have received in the form of a “missing” DGP (Param Bir Singh) and an ex home-minister (Anil Deshmukh). VANISHED OVERNIGHT. Your honour, you can’t be “not satisfied” with the Yogi government and yet “unmindful” of missing accused in Maharashtra of Maha Aghadi Sarkar.

A Remark Which Did No Credit To CBI or Modi government

There is another remark Chief Justice Ramana made on Friday’s hearing: “The CBI is not a solution for reasons of the persons involved…”

Now this looks a case of gross slip of tongue. My understanding of English suggests that in the honourable judge’s view CBI is not credible when it comes to probing the misdeeds of persons in government. In one sweeping remark, the CJI damaged the credibility of both Modi government and CBI.

The trouble is the Chief Justice ought to have paused and reflected if judiciary’s credibility is similarly under cloud in masses’ perception. Among many seminars and public forums on which our honourable judges speak these days about “upholding constitution” and “individual rights”, they should also tell masses why they thought Kumbh was bad for the pandemic and not protesting farmers or Shaheen Bagh; why Kanwariyas could’ve been a super-spreader but not Bakrid; who colours are crackers are life-threatening but thousands of slaughtered goats are no environmental threat.

They should also tell such cynics of Indian judiciary why Lakhimpur Kheri was worth a Suo Moto and not Srinagar; Why a missing minister’s son is an urgent matter but not a missing head of police chief and an ex state home minister. Why it views UP different from Maharashtra or Bengal.

And an honest admission too would also help judiciary’s credibility among masses: Would the judiciary have taken Suo Moto notice of Lakhimpur Kheri if just four unfortunates, and not farmers, had been the victims?