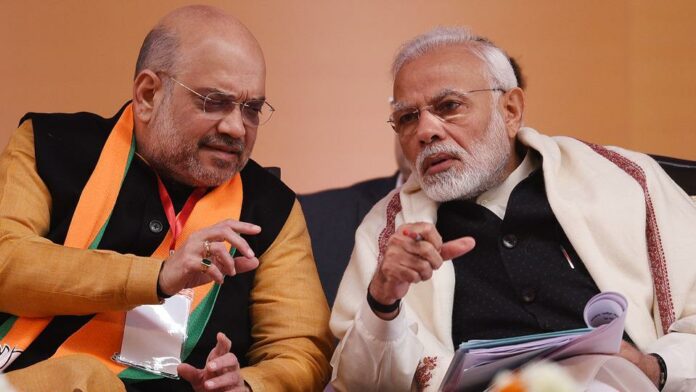 Forces which oppose Bharatiya Janata Party (BJP) would feel they now have a gameplan in the wake of its’ crushing defeat in the Delhi assembly elections.

Political opponents which fear BJP’s hegemony—and nearly all of them do—are the hyenas who think they could now hunt the lion named BJP down. They won’t take recourse to Parliament or judiciary but would look to resist Centre on the most inane of legislations on their turf. They would put women and children in front. They would look to stall or breakdown India’s federal structure and create anarchy.

The time-tested proven method of George Soros-led Liberal forces is to force a showdown with police on streets, show the State impotent, build support in captive media and when the state strikes back, build the pressure through global colonial, imperial forces to bear down on the hapless country.

Propaganda mainstream media, who fatten themselves on their political, religious and colonial masters, would be on steroids now. They would be more vitriolic and vicious. This despicable media hasn’t found one act of Arvin Kejriwal—or of Ashok Gehlot/Kamal Nath—in the last few years worthy of criticism. NOT ONE ACT! Even though AAP operates right under it nose in the Capital. It must tell you a thing or two about their “neutrality.”

Indian Muslims have long enjoyed entitlement in a “secular” nation. Modi’s rise played on their anxiety. With abrogation of Article 370, Triple Talaq Act and Ram Janmabhoomi, they were simmering under the breath. Citizenship Amendment Act (CAA) gave them a tool. Propaganda media and political parties fanned it.  Theirs became a cause célèbre. It made headlines around the world. A nondescript lane of Capital was turned into a shrine. Death of a toddler was deemed “Qurbani”.  Secessionist slogans and war-cry of “Azaadi” rent the air. They would now stall your daily life and governance.

Urban youth, particularly students and of elite society, were completely sold off to the Jamia and JNU narrative.  This 20s newbies feel no connection with 370 Article or Ram Janmabhoomi, two issues which have by and large troubled the soul of this nation. It’s the power of the propaganda, and our shambolic education system, that these youths are completely weaned away from the ethos of India.

BJP, and its two engines, Narendra Modi and Amit Shah, work under the constraints of the Constitution. They won’t dismiss a Mamata Banerjee or Pinaryi Vijayan government or make Shaheen Bagh protestors run for cover. There won’t be lathi-charge or pellets shots. They do get affected by the negative publicity. The headlines and images which are multiplied by international media leave them passive.

In view of the mounting challenge from these four opposing forces, BJP would be foolish to believe it would just go away. These four forces would “create” issues to cause disruptions. There is no escaping them. You can’t wish them away, close your eyes and feel it’s disappeared.  They are in your face. Sharks have tasted blood in the water. You better deal with it or squander everything you’ve gained in the last few years.  There is a new game in the town. It’s called ANARCHY.

One, BJP shouldn’t be shy of dismissing state governments which promote violence and anarchy or resist their Constitutional obligations. The first litmus test would be at the time of CAA implementation in April against which Punjab and Kerala assemblies have passed resolutions. If they resist its implementation, dismiss them. To hell with niceties or looking for approval from hostile corners.

Two, BJP shouldn’t leave propaganda media to its own devices. Instead, they should try to force them in corner on their omissions and commissions. Fake propaganda spread by them needs to be accountable. Mobilize readers. Have a very active, virile awareness campaign to their manipulations. Drop the velvet gloves. Spread the world. You have men and money. Use it to tame the beast.

Indian Muslims must be stripped of their undue entitlement. Have a very serious look at how India could claim to be a secular nation and yet promote minorityism by having separate ministries and funds. Bring on Uniform Civil Code which is an obligation our Constitution has longed for from our lawmakers. Don’t give an inch or treat any group as privileged. Treat them as any other citizen. Law and order is a state subject and if a hostile state government promotes anarchy by prodding the Muslims, deal with them harshly.

Urban youth must be engaged with discussion. There ought to be a mechanism where their issues are listened to and addressed on a fortnightly basis. Engage them. Propaganda media won’t cover it but publish ads, use radio and television, to let the “neutral” public know of government’s keenness to engage. Long-term solution of course is change of India’s education system and it won’t happen on its own. It needs be done. The course correction must begin now.

There is also no denying that BJP expected such support from Hindus. That’s why perhaps Shaheen Bagh was allowed to linger as long as it has. That’s why Pakistan was evoked at every public address by an Amit Shah or a Yogi Adityanath. Surely, it has been a miscalculation to bank on their traditional votes.  Hindus are a sloth – and history is a testimony.

BJP doesn’t need to blink against the four inimical forces. It also needs to ramp up its information- disbursement mechanism. It needs to nurture those voices who are laboring under their own passion and “dharma” but could do wonders if sustained with attention and care. As for Hindus, they have been disappointing. They can’t see the threat these four forces are determined to inflict on their existence.  And on India they call their motherland.