Afghanistan script: Now you would have endless images of suffering Afghan women 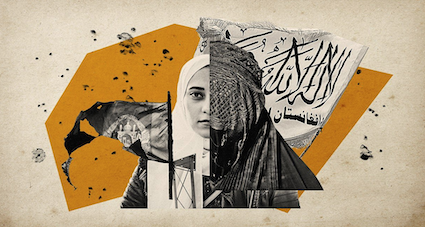 If I know how the West operates, you would soon have images of atrocities on Afghan women being splashed in newspapers.

That’s the way they sold the war on Afghanistan in the first place. Laura Bush, the then president’s wife, bemoaned the plight of the veiled Afghan women on November 17, 2001. Cherie Blair, the British prime minister’s wife, mouthed the same a few days later. “Saving Afghan Women” became the rallying cry of liberal feminists in West.

It didn’t happen overnight. First the United States, in conjunction with Saudis and the Pakistani military, promoted the Talibans against the Soviet Union-backed regime in Kabul. Communists were ruthless and hated in the hinterland of Afghanistan. Talibans, meaning students in an Islamic school, rose from these rubbles. The young Talibans who entered Kandahar in 1994 were young men who had studied in free Islamic schools in the refugee camps in Pakistan.

Washington had then backed Talibans so that in a peaceful country they could have its oil and gas pipelines from Central Asia. The Talibans stood out as a help for they were ruthless in enforcing rules. But it didn’t last. Talibans were then entangled in a civil war against Northern Alliance. US withdrew its support in 1996. For four years, it engaged in Islamophobia by promoting the horrific fate of Afghani women. Before 9/11 gave them the moment to invade the country on the call of “War on Terror” and eliminating al-Qaeda.

The stereotypes were injected on domestic audience through media: Women oppose the Talibans while most Afghan men support it. I mean in what kind of society would this split in family be true? Afghan men were portrayed as primitive, barbaric and feudal never mind that they had been negotiating with the Americans in Qatar on laptops for last dozen years.

All this of course was utter nonsense. But war beckoned and the US, British and their foreign allies began to bomb the poor ravaged country.

I won’t be surprised if we are seeing a repeat of the same old dose. Americans would never allow the Belt and Road Initiative (BRI) of China to succeed for it would lift the region—Afghanistan and Middle East—out of economic and political morass and snuff out their game of chaos US has unleashed on the region for decades.

Within three days of Talibans’ occupation of Afghanistan, two domestic leaders Amrullah Saleh and Ahmed Massoud launched their new resistance against the Talibans. It got wide publicity in western media. Such a resistance can’t happen overnight without months of planning.

Saleh is an old CIA spy. Ahmed Massoud has been prepared by the Brits for years: From the days he did a military course at the Royal Military Academy, Sandhurst. He got a bachelor’s degree in War Studies from King’s College, London in 2015.

What we are witnessing is launch of a new resistance campaign in Afghanistan, a passage of events in this unfortunate country, we are not unfamiliar with. The pitch would be raised on the plight of Afghan women, never mind that many thousands more of them were maimed and killed by the West than by the Talibans in the last two decades.

It’s important if one remembers what happened in Afghanistan when the Americans bombed the country in the closing years of last millennium. There was a negotiated settlement between US-backed puppet regime in Kabul and Pakistan-backed Taliban which decreed that US could have its man in Kabul while the Talibans could keep their control in villages, often from exile across the border in Pakistan.

You can’t have a better evidence for this than the fact that for two years, there was no resistance to the American occupation in Afghan villages. NONE. These are the villages from where thousands of Taliban leaders emerge.

Before I delve into the present let’s be clear what explains Talibans hold on Afghanistan and why there was no resistance to their spread in present-day Afghanistan.

The leaders of Talibans are village mullahs. They are not elites of the country. They are respected in the neighbourhood. They are not landlords, foreign educated or in high government posts.  They tapped into the frustration and anger of an average Afghani against the huge corruption in high offices.

Afghanis had initially welcomed Americans for they had already suffered for 20-odd years under the Communists and Islamists. They saw in the US a road to prosperity and economic aid. The aid did come but never reached them. It went to the foreign-funded NGOs and warlords who were instrumental in helping the international opium and heroin trade, facilitated by the CIA and Pakistani military. They had the villas and humvees while the poor could only watch them speed by.

Talibans did one more thing which endeared them to rural folks. They ran a honest judicial system in the rural areas they controlled. The common folks could expect no justice from the national judicial system which was corrupt and crooked. In contrast, the Taliban judicial system was preferred by common man across the spectrum. It gave Talibans a powerful control in hinterland. Small farmers and poor sharecroppers leaned on to them.

There are all tell-tale signs that the present situation in Afghanistan would be a return to old days of Civil War, the chaos that the West prefers in this mountainous country.

It would be a mistake to think of Talibans as one solid entity. There is a section of Talibans which has allied itself with the Islamic State (IS). They control Ningrahar province in the east. Then there are Pakistani Talibans who are a loose network, extremely ruthless and puritanical. These Pakistani Talibans and the infamous Haqqani network are those who kill Hindus, Sikhs, Christians and Shias with wanton abandon and which, let it be said, is always condemned by the core Talibans. Yet Talibans appear to have compromised at the moment with Haqqanis due to various compulsions. They have promised peace and no bloodshed but how is it possible when there are corrupt warlords to be taken care of? Haqqanis probably would be a help in this task. Then there are Hazaras who are backed by Iran and who would rise to protect its 15% of Afghan population.

When hell breaks out, be sure that the West would ride into Afghanistan again, armed with the mandate to liberate Afghan women and keep the country in chaos to undo their mistakes of first term. The best interest of West is if Afghanistan remains on boil. That’s why you have China, Russia and even Iran rushing to look to legitimize the Talibans. Things would unfold quickly from now now.

How this would happen one is not sure. It’s unlikely that the US would directly be involved in War. There was a lull of 15 years after Saigon. This one could be longer. The core base of neither the Republicans nor Democrats support it. Americans, be it white, black or brown, don’t support war. So the US would enforce chaos through proxy players they abound with.

Once the chaos happens, common Afghanis would look to sneak out of the country. Already there are a million such refugees in Pakistan. So overflowing is their numbers in Iran that this Islamic Republic is beginning to return them. Assassinations and massacres are common in these “camps” as the enforcement agencies and police become mere onlookers.

The United States would also use the economic card. Afghanistan is poorer now, its cities have swelled from neighbouring towns. It largely depended on foreign aid and through opium sale. Without these two happenings, a collapse would happen soon.  We know this from examples of Cuba, Russia, North Korea and Iran which have been groaning under the weight of US sanctions. In the past it was Vietnam and Iraq.

The West would also bank on the insecurities of neighbouring nations like India and Iran for instance. This Taliban victory would fuel Islamists in Syria, Yemen, Pakistan, Uzbekistan, Turkmenistan, Tajikistan, Mali, Somali and dare I say in India. Fleeing refugees on the door of Europe would be a theme too.