Ahmed Patel and his links to the 12th Road, the most important one in The Game 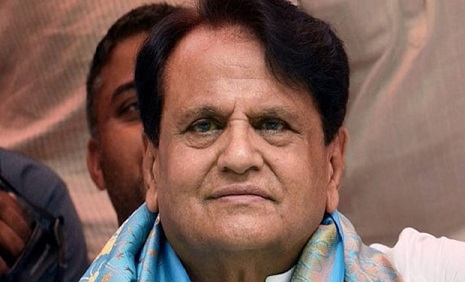 Here in India, we say good things about anybody and everybody who passes on to the next world, and there is no exception on Ahmed Patel or Ahmedbhai Mohammedbhai Patel of Broach, now Bharuch. I did not know him during his career in National Politics but certainly watched from a distance over the years – as well as up close in the late ’80s and early ’90s.

But this is about Ahmed Patel and his departure from the 7 visible layers of power in Delhi added to the 4 not so visible layers and the 1 absolutely invisible but most powerful layer which is going to cause a major tectonic shift in Delhi? Please read on about what is also known as the C-Hexagon theory in Delhi of what makes things go around.

To understand this better, please draw up a map of India Gate and the Empty Canopy, better still, let me do it for you.

On the extreme left or the Western end of the map is the source of all power in Delhi and therefore in India. What used to be the Viceregal Palace and is now the Rashtrapati Bhavan, and then slightly to the East of it, a round shape and a triangle. Heading further East towards India Gate and then to what is known as “C” Hexagon which is around the now empty canopy are 7 important roads, 4 not so important roads and 1 hidden road. Each road leads to walls and gates.

Each of these 12 roads emerging has a deeper meaning and as a first cut, this map will help – the 7 widely known walls with their restricted gates are listed. The 4 lesser known walls are – foreign hand/diplomats/UN, corporates/MNCs/Banks, lobbyists/policy groups/arms agents & an 11th wall full of mid-level punters who wait for coalition governments.

It is the 12th wall which is of interest as far as the dear departed gent is concerned because it is also the most important road in the game, gate and wall.

So what is this 12th road, wall and gate in Delhi, and why is it so secret? To answer that question, I ask another question – what was the most important commodity that brought first the Mughals/Mongols and then the Colonials (British/Portugese primarily) to India? You have a choice of answers – and you are requested to use your brains to list them in order of importance

i) lots of other stuff

Go back into history a bit now. Much before Bombay and Goa became important trading ports, certainly before Calcutta was even conceptualised, were the sea-ports of the Narmada and Tapti emerging into the always calm waters of the Gulf of Khambat or Cambay. Hazira/Surat and Dahej/Bharuch. How many of us are aware that Dahej/Bharuch/Broach has documented trading records with the Mediterranean port of Marseilles going back 12,000 years?

And what was the most important commodity in these trade lanes? Hint – this trade did not suddenly vanish on 15th of August 1947 either. And in sheer numbers, accounts for more than the oil trade and arms/ammo trade in context with India.

Ahmed Patel, very good man, and very intelligent, was born in Bharuch. If ever there was and is a city that knows and knew the importance of trade as the first line of wealth and external defence, it was and still is Bharuch/Broach – and are you, dear readers, aware that the Colonials could simply not breach these two river ports leading to the oceans – which is also why they had to make their gateway ports in monsoon-impacted Bombay and Goa? Karachi, or Mai Kolachi as it was known, came much later.

Anybody born in Bharuch knew all this and more. Late ’80s, as the Personal Private Secretary to a many splendored politician who had been in his days in Cabinet Minister posts on ruling and opposition sides (yes, you could be a Cabinet Minister rank Position as Leader of the Opposition), I learnt and listened with admiration to something which I as an ex-seafarer had learnt a bit about. In Marseilles. For me, Marseilles has always been the ultimate melting pot seaport city anywhere in the world of Europe, where power really lay, and still vests.

You want to know history of the Tapti and Narmada Civilisations as viewed by the rest of the world? Go to Marseille. Maybe Venice, also, but for really ancient linkages – Marseille. Commerce trumped religion hands down here and always has. Secret of its success for thousands of years.

So where does the late lamented Ahmed Patel come in?

For this we go to Bombay, in the recent past, for an era when Haji Mastan, Karim Lala and Varadarajan Mudaliar had faded, an assortment of new gangs had not still emerged, and in the vacuum stepped who? Those records from Bombay Airport and Seaport systems have totally vanished, they were dangerous times, IPS Officers like Vinod Kumar Mehta had been killed with impunity in 1984 in Calcutta. Bombay was no different, and there are still alive and around some people from the Police and Airports Authority of India who kept a low profile till 2014, or managed to remain posted abroad, on what they knew and know. Some of them are friends and family, some were and are working acquaintances, because in the ’80s and ’90s, I too was in the cargo business, and knew my way around India’s principal seaport and airport, Bombay.

Ahmed Patel’s rise in National Politics was co-terminus with the focus of India’s trade shifting out of Bombay to multiple new seaports and airports emerging all over. Most importantly in Gujarat. To the best of my knowledge, he recognised this trend earlier on, and certainly took full advantage of the opportunity. Given that era, there was only one winning team in the game then, and that was the Congress.

The game is the same, but the winning team is not the same, and that is where the hidden 12th road referred to in the beginning of this article which leads to National Stadium comes in. The old order changeth, the new order moves its offices closer to the 12th road, and East of the Empty Canopy, as the sun rises, lies a National War Memorial to remind us – what is really National Interest.

Ahmed Patel, good man at his game, but stayed on the losing side for far too long. Time now is for others from Bharuch to emerge, Trade and commerce will remain what they have been for centuries and thousands of years, but the control of the game now moves back East. Recall the Circle and Triangle mentioned right in the beginning and the Viceregal Palace?

Next to that triangle is the biggest diplomatic bungalow in Delhi, at the Western end of this map. It belongs to the British High Commissioner, and is now well and truly headed for the setting sun. The rising sun is now in Bharuch.