Alas, these devious Indians don’t know how to respect Englishmen 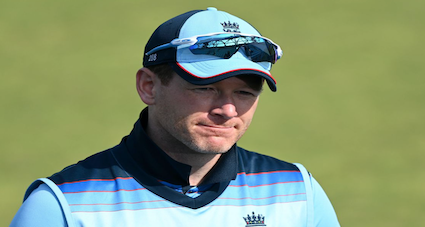 One of these days, Eoin Morgan would burst out bawling. He is not a phlegmatic sort, like Ben Stokes, and wears his tender heart on sleeve. These cameramen keep panning on him in the hope they would once get that perfect trickle down those cheeks.

How did he set out from home? The Caesar who would bring the world to Romans. England, the White-Ball knights of the game, packed with hounds, swashbucklers, spin sorcerers. There is no cut or thrust or parry; just a few Sabre teeth plunging into throat till they pop the spinal cord into two. This is not the kind of formats to worry about dusty bowls and licking lips.

Only if Morgan could return home on 29th, but for this little charm of IPL and the quarantine protocols, he would seek out Joe Root in a countryside farm and holler his heart out. Root would understand. He too had conquered Sri Lanka, and had heralded Chennai with an invasive drill within an inch of Indian hearts, before one Axar Patel emerged from behind the curtains and vaporised him.

England doesn’t need analysts, it needs detectives. Behind the curtains. It’s where Indians are massing their faceless. These devious Indians, in front, pretend to roll over. Bench Rohit Sharma; don’t bench Runless Rahul; lose wickets in clutch in six overs; ask Chahal to offer runs in charity; almost a sucker-punch away from a knock-out. Only then these hidden terracotta warriors emerge and begin to buzz, some jump on the back, others needle eyes; some slip inside gullets, others are nailing you to the floor.

I know this sounds grotesque but such is the effect we are living it. Would sixes in back tiers by Pant and Yadav off Archer no less could be termed anything else. Which newbie poops a 135-run base of a party. When have upstarts knocked a captain around the park without a hint of remorse.

They certainly haven’t read history to know how to treat Englishmen. They certainly are not as meek as Gandhi once turned grown up millions in Barns or in Bombay.

They should ask for an ICC hearing, preferably with Kumble and Dravid in a respectable corner, men of perfect manners, no doubts the lasting effect of Test debuts in Mother England. The guerrilla tactics of Indians is a blot to the fair name of the game.

They say these callow youths pick up our own nuances in the IPL Fair. That obscene money is thus well-spent in rubbing the rough diamonds with the required glitter. Some say it’s “A” cricket which gives them a flavour of our Kingsmead or Kensington. Others opine a funeral in family, in not too distant past, a promise eked out before the final breath, becomes the life’s mission. Some just want mothers to sit at home after all those years from one bus stand to another and tiffin in hand, at wait in coaching centres.

So how do we plan for World Cup in a few months. Without detectives to weed out these back-curtain guys. When Shami and Bumrah; Ashwin and Jadeja for sure would be in the mix. And only god knows the new Sundars and Suryas and Shubmans who could trot out in the intervening IPL.

Maybe the answer is puncturing the core group of leadership, these Kohlis and Shastris. They are the only constant in this house of shifting mirrors. They fill them with subversive ideas. They appear back-slapping types, locker-room boys but actually are Deans in man-management. Why us, they are not brought down by even their own politicking men. Their boys feel they can get a fiver and a century in every match. Cant we offer something to these Butch and Sundance dudes? Everything material they have. Pride and honour is aplenty. Emotionally stable. How do we see the last of them?