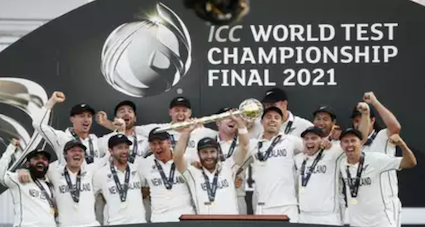 Common sense seems to have finally prevailed at the International Cricket Council (ICC), with a rider of course.

The much-hyped World Test Championship, whose final was creatively labelled the Ultimate Test, ended its maiden season, after two false starts, with a much-deserved New Zealand win over India. But the competition, a beleaguered effort to shift the focus back to the red-ball game, as Test cricket has been so uncharitably called, left more questions than answers.

The foremost among them was the rather puzzling allocation of 120 points per Test series, regardless of the fact whether it featured two or five matches.

It must be remembered that Test series, unlike the limited overs white-ball contests quite often featuring more than two teams, are without exception bilateral clashes. The straightforward meaning is that the encounter features a home and an away side.

The popularity of a series is purely governed by how intense the rivalry is between the participating nations, though sometimes the hype around such meetings may become an overkill of sorts.

However, the ultimate success for any Test playing nation is winning on foreign soil.

Whereas the revised points format proposed by the ICC for the new WTC cycle kicking-off on the 4th of August, 2021, at Trent Bridge, Nottingham, with the first of the five-Test series between England and India, seems a significant improvement on the previous one.

A Test win would now be worth 12 points while a Tie would garner six points apiece though a draw would fetch only four points for either side.

A bit of tweaking could factor in wins at home and away, rewarding success on foreign soil with a couple of bonus points. Similarly, a loss away from home but below a certain margin could gain a touring side another bonus.

Nations hosting to a Test series, without fail, hold an upper hand. Hence a reward for success or a good fight could possibly be incorporated into the points system to help encourage more absorbing clashes.

After all, India’s success in Australia in the 2020-21 season was certainly stuff of dreams. Who gave India even a sniff of a chance at the bouncy Gabba in Brisbane but the home side were indeed humbled.

Similarly, the decision to award the WTC final game to Lord’s smacks of the colonial hang-over. Why not the higher placed of the two teams in the title clash host the grand finale, as is the case with most professional sport where better ranked teams have the home advantage. It will only improve the competition rather than teams merely satisfied with finishing among the top two.

The number one spot will carry the home advantage prize. Not that New Zealand were complaining about the near-home conditions that greeted the teams at the new venue – Hampshire Bowl, Southampton.

It is finally up to the three wise men of the ICC cricket committee which has been working tirelessly to make some kind sense out of the 120-points per series even through these rudely interrupted and trying times.

Proactive decisions, without doubt, can make WTC the Holy Grail of cricket!

The announcement that a 20-member group of football clubs is all set to launch a breakaway competition in Europe seems to have taken greed...

DRS is making both players and fans unhappy: Then for whom cricket is played for?