Atal Tunnel: When prepaid media didn’t exist and tourists were not invented 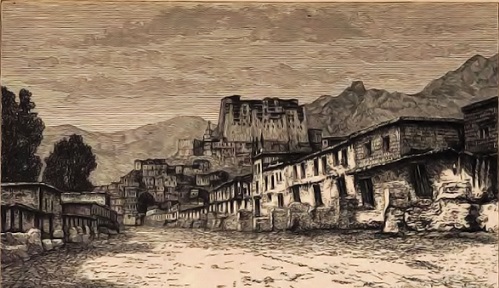 Somewhere in the noise in the prepaid mainstream media has been drowned out the actual revival of an ancient trade and pilgrimage route. Now an important 3rd axis land route too for our Northern borders as well as economic connections.

Pilgrim route and trade route, in history, these were always combined for safety as well as blessings. Kargil to Padum has been a motorable road for some time now, Padum to Darcha is tough and often needs 4WD but can be done with skillful driving on anything, and likewise Darcha to Keylong has been around for a while too. Padum to Darcha still shows up as a trekking route on google maps. The fact that the tanker truck drivers now prefer night driving says a lot too. However, in between lies the Shinkula Pass at 16,600 feet – where yet another tunnel is being planned.

Najibabad in Uttar Pradesh, not too far from Bijnore, is famous for having been an important staging post at a time in history when Kashmir and Punjab were in turmoil. Trade, however, had to continue on the East-West axis from Constantinople (Istanbul) and beyond at one end and Calcutta at the other. Avoiding Kashmir, Punjab and even Delhi.

The last time this happened in history was in the 1760s, Plassey/1757 and Buxar/1764 had brought the British within striking distance of the great prizes further up North. Meanwhile, the Marathas had captured Delhi/1757 and by 1759, the Marathas, Scindias, Sikhs and Afghans had placed all of North India in total chaos.

But trade had to continue. Shawls and what was wrapped inside the shawl,saffron as well as high quality opium from poppy of a sort not available in the Gangetic Belt. And on the way back, cloth and silks from India along with spices and herbs. It has often been said that all the gold and silver that Nadir Shah looted from India was back in trade within 15 years – such was the recurring wealth in India. Printed fabrics from Masulipatnam were most sought after, but what emerged from Multan was very good, too.

From Kargil, Westbound, the caravans made their way through Skardu and then Afghanistan towards Persia and further West, camels, mules, human beings. Tourists were not invented, writers were rare, and en-route dalliances unlikely. Stability meant fewer bandits and lower tolls. Margins and profits were huge for the brave.

Punjab, both in India and in Pakistan, is in turmoil today. Blocking railway lines and roads which serve the border areas is something which has massive after-effects. As for Kashmir, with the main all-weather routes passing through the Valley, the costs paid at times involving both money and human lives, have been tremendous. The economic after effects if even a part of the military traffic shifts from the via Punjab – Jammu – Srinagar route to the via Solan – Manali – Kargil route is just a small hint.

What people should also know, however, is that the two-way trade from Ladakh to and from the Rest of India just received a gift of the revival of an old trade and pilgrimage route. Those trucks going up full can now start returning with cargo of different sorts. Without having to necessarily go through Kashmir and Punjab. Just as they did in the 1750s and 1760s. And thus, after crossing the Ganges at Haridwar after the pilgrimage, came Najibabad as a then major crossroads of trade.

Interesting times ahead. This route was long overdue. I was first told about it in the summer of 1974. June 1974, that’s me (below) behind the camera as a 17-year-old. At Rohtang. Then again by a friend in Najibabad.

In recent decades, the traffic jam at Rohtang after climate change had made it difficult to cross. In 1974, this is how it was in June, we had to be rescued on the way back by THE PIONEERS of the Indian Army as the fog came down so rapidly – the speed at which it became cold and zero visibility is something I never saw again in my life at sea. One minute it was white and sunny, the next it was grey and zero visibility. June 1974.