Attn. Faye D’ Souza: for a lesser communal tweet, a star chef was sacked in Dubai 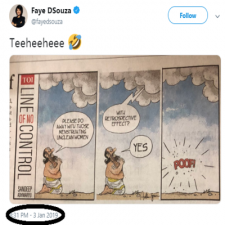 This is a piece about a cartoon and an anchor. Both are interchangeable: a cartoon could be an anchor; an anchor could be a cartoon. Both could invite ridicule and stay unrepentant.

On Friday (January 4, 2019) Times of India published a cartoon (see picture above). It mocked Hindus for stopping menstruating women enter Sabrimala temple. A priest is seen invoking Gods to “do away” with “menstruating unclean women.” Gods asks “With retrospective effect?” The priest says “yes.”  Next, “poof” the priest is smoked out of existence (since all of us come from a woman’s womb). This was tweeted by Faye D Souza of Mirror Now with apparent glee: “teeheeheee.”

“Teeheeheee” is “Ha Ha” in dictionary. It means uncontrollable joy. Utter joy, as Faye D’ Souza must have seen, at the “stupidity” of Hindus. That Faye is a Christian, it carried communal tones. Times of India might have been the original “communal” instigator but Faye was no less in her contempt for Hindus. She is lucky she is in India where Hindu majority are tolerant beyond belief. A Michelin-starred chef Atul Kochhar was sacked by his hotel employers in Dubai for his “anti-Islamic tweet” recently.  JW Marriott sacked Kochhar on fear of hurting “local” sentiments—and their profits–in the Islamic state. Kochhar’s tweet–admonishing actress Priyanka Chopra for ignoring Islamic excesses in India—was honey compared to Faye D’ Souza’s poison-dipped tweet.

Anyway, what caught my eye was a surgical tweet by the editor of OpIndia, Nupur J. Sharma: “Don’t think people who believe in virgin birth should be talking about menstruating women. No?” (image below)

Some scholarly tweets were no less devastating. A tweet handle (see image below) quoted The Bible (The Book of Leviticus: 15: 19-30) to show what Christianity thought of menstruating women.

Another tweet quoted The Book of Ezekiel 36: 17 (Hebrew Bible), to stress the point of how Christianity viewed menstruating women (see image below).

I checked up on Islam. This is what it says on menstruating women doing prayers: “It is haraam for a menstruating woman to pay both obligatory and naafil prayers, and they are not valid if she does them. She does not have to do a particular prayer unless she was pure or became pure with enough time to perform a complete rak’ah, in which case she has to do the prayer, whether it is at the beginning of the time for it or at the end.”

“In al-Saheehayn it is also narrated from Umm ‘Atiyyah that she heard the Prophet (peace and blessings of Allaah be upon him) say: “Let the girls who have attained puberty, women in seclusion and menstruating women go out – i.e., to the Eid prayer – and witness good and the gathering of the believers. But let the menstruating women avoid the prayer place.”

The above instances above are not meant to say that menstruating women are unclean. It’s that most religious texts have a similar opinion on them. It now brings me to the “Sabrimala and menstruating women” bit and the “misinformation” propaganda on it.

The Sabrimala deity Ayyappa has other temples at Kulathupuzha, Aryankavu, Achankovil where he exists as a child, as a married person with a wife and as an ascetic. There is no restrictions on entry of women in these temples. In Sabrimala, Ayyapa is present in the form of Naishtika Brahmachari (celibacy). According to the rule of Naishtika Brahmacharya, its practitioners besides celibacy are also required to maintain absolute restraint over all their senses—including non-contact with women, especially of reproductive age.

One of the beauty of Hinduism is that at it allows everybody to follow whatever route or faith they believe it. The truth is one but the routes are limitless. It has millions of gods because a devotee could choose his own way for “moksha.’ Hinduism thus accords a similar space and respect to Islam and Christianity.

To hold Hinduism as practicing gender inequality is a rotten propaganda. All rituals must be done with your wife beside you. Mahakali, Mahalaxmi, Maheshwari are all manifestations of how Hindus treat its women. All its gods are shown together with their wives—Sita-Ram, Shankar-Parvati etc. Why, it’s even Mother India (Bharat Maa) when Hindus mention their motherland. “Vandematram” is another one proof.

It’s been nearly 48 hours. Neither Faye D’ Souza has issued an apology nor deleted her tweet. Times of India too hasn’t shown a remorse on the offensive cartoon. This impudence flourishes because majority Hindus of this country are liberal to a fault.