Babul Supriyo has to pick his political career from shoelaces 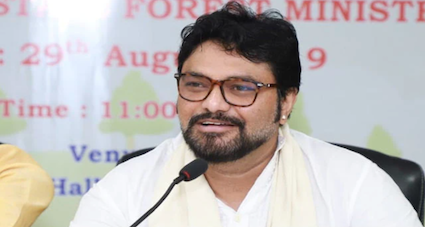 Babul Supriyo, the singer-turned politician known more for his Bollywood songs and signature motorbikes than any noticeable achievements in the corridors of power, now has an additional tag: former minister. This is, arguably, Supriyo’s facepalm moment.

The two-time member of Parliament, who was dogged with accusations that he loved the glitter and glamour of Indian movies (read Bengali cinema) more than his most recent ministerial portfolio of environment, forest and climate change, was among the 12 ministers who were dropped from Prime Minister Narendra Modi’s cabinet on July 7.

Supriyo probably had an inkling of what was in store for him following his lacklustre performance in the ministry, where his boss was Prakash Javadekar, who also exited the cabinet. Supriyo’s fate was perhaps sealed when he lost to Aroop Biswas, the Trinamool Congress’ sports and power minister, in the recent West Bengal assembly elections.

Although Supriyo is said to have tried to salvage his position, it was perhaps too late. Rashtriya Swayamsevak Sangh insiders told this writer that Supriyo tried to reach out to the Sangh Parivar in a bid to save his seat, but that didn’t work.

Supriyo has been a junior minister for seven years, with little to show in terms of accomplishments, according to critics. During the first term of the BJP-led National Democratic Alliance (NDA) government, Supriyo served as minister of state for urban development, housing and urban poverty alleviation (November 2014 to July 2016) and as minister of state for heavy industries and public enterprises (July 2016 to May 2019).

He was appointed minister of state for environment two years ago. However, the environment ministry rarely figured in top government meetings and Supriyo did not make any headlines, people who track the ministry said.

Sources in the Bharatiya Janata Party told this reporter that Supriyo routinely told the top brass of the RSS that he was pushing the Hindutva agenda. However, Supriyo was, in turn, told that it was also important to think about the nation and connect with the people, especially in the middle of a raging pandemic.

That apart, it appears that Supriyo didn’t quite endear himself to many people.

“He was more into the glitter and glamour of cinema. There was a feeling in the party that there was a lot of Bollywood in his election campaigning – he was not seen as rooted to the cause of the party,” a BJP functionary said.

The source said complaints about Supriyo had even reached the party high command and attempts to restrain him didn’t seem to work. Party leaders were said to be aghast when they learned that he took out a motorcycle rally while campaigning for the West Bengal assembly elections.

“His music and motorcycle rides were his signatures, not politics, not governance,” the party functionary said.

Supriyo was fond of his motorcycle, which had the letters BS embossed on it, and often headed out on long rides. His friends say he was inspired by Ernesto Che Guevara, the Marxist revolutionary, and wanted to travel across India to explore the nation. However, he never followed the politician’s rulebook and forgot—time and again—that he had a ministry to handle.

Even on July 7, when the cabinet reshuffle took place, Supriyo’s social media posts were surprising. He first said he had been asked to resign, then deleted the post and clarified that he had resigned from the council of ministers. He also wrote that “when there is smoke, there must be a fire somewhere” and stated that he was “extremely happy” to go “without a spot of corruption on me.”

Bengal BJP head Dilip Ghosh reportedly ridiculed Supriyo for his social media outburst, saying he did not seem to understand the role of a worker in a political party who may be asked to leave a post and is given new responsibilities.

BJP sources also claimed that Supriyo could do very little development work in his Lok Sabha constituency Asansol, which he won in 2014 and 2019. In addition, Supriyo lost the Tollygunge assembly seat by over 60,000 votes in the recent assembly elections, which saw the Trinamool Congress return to power. All Supriyo’s political ambitions, including possibly the seat of the chief minister of Bengal, are now reduced to dust.

Supriyo, of course, was quick to criticise the Mamata Banerjee administration last month for the alleged attack on officials of the National Human Rights Commission who had been sent to West Bengal on a fact-finding mission following reports of post-poll violence.

The party eventually realised that Supriyo barely has a toehold in West Bengal. Sources claim Supriyo had to go because he was seen as a person without adequate ground support in the state. Also, it was clearly time to accommodate other BJP lawmakers from West Bengal.

Sarkar has the education portfolio, Thakur got ports, shipping and waterways, Barla got minority affairs and Pramanik home affairs and youth affairs and sports.

The ministers represent various communities and ethnic groups of the state. While Pramanik and Barla are from north Bengal, Sarkar comes from the Junglemahal area, a former Maoist belt, and Thakur hails from the North 24 Parganas district, home to a large chunk of people from the Scheduled Castes. He also represents the Matua community.

Meanwhile, in the blistering heat of New Delhi, Supriyo is saddled with a problem. How will he return to West Bengal, where the Trinamool Congress has already started composing songs and poems ridiculing the Asansol MP?

Supriyo must find a way. Maybe it’s time for the singer-turned-politician to sing his signature song from the 2000 film Kaho Na… Pyaar Hai, which first brought him into the limelight.