Be bored but don’t ignore such leeches in your newspapers 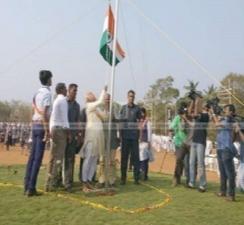 I might bore you, I am bored myself, but persist we must for the creeps are not giving up. There is no credible criticism against Rashtriya Swayamsevak Sangh (RSS) or Bharatiya Janata Party (BJP). Yet these uglies keep farting in our face. Either you leave the room or brave the stink.  I for one would rather have a contorted expression than seek fresh air.

The Hindu, that old dog with a Leftist bone between its teeth, turned feral on Monday when it had no less than three stories between its cover to spite RSS/BJP, including an interview with Hamid Ansari who is spraying every tyre of the neighbourhood with his toxic leak. I will keep my interjections short and need your attention. Too many free goals have cost us a thousand years. Yes, no jokes.

The first one which tried to dribble past me was Neera Chandhoke.  Just google her, read or watch her rants and you would have the image of a hag riding a broom (a take on witch-on-a-broom). A lifetime of visceral hatred against RSS/BJP has neither helped her looks nor mind. Just imagine a squeezed toothpaste and you get the picture.

Chandhoke is convinced India’s sacred Constitution would go, “if not today, then tomorrow” because of right-wingers. (Who are we to tell her that from Emergency to blocking “triple talaq”, it’s Congress which is working overtime to bury the Constitution and its primary markers of freedom and equality.  Need more? Pt Nehru allowed janaganamana to be played as national anthem in United Nations even before the Constituent Assembly could take a call. Besides you must tell me madam what comes before: Society or Constitution? )

Then follow that boring propaganda that “RSS didn’t participate in freedom struggle” and “berated” the “national flag”. (RSS was not, is not, a political organization. It looks for social cohesiveness and regeneration of Indians, irrespective of caste or creed. Madam, plug in your hearing aid if you need to, but neither Jinnah’s Muslim League nor Ambedkar’s ILP nor EV Ramaswamy’s Justice Party took part in freedom struggle. Nor your holy cows Communists, for most part).

The “flag issue” must be handled like Picasso’s cubism: a structured rebuttal which is so watertight that mosquitos and rats can’t slip in. So here it is:

A seven-member committee was formed to recommend a flag by the Congress in Karachi on April 2, 1931. The flag committee had Sardar Patel, Abdul Kalam Azad and Jawaharlal Nehru, among others. The outcome was a recommendation for a saffron flag with the emblem of blue spinning wheel in corner. The saffron of “flag committee” was rejected—no surprises here—by the Congress! No less than Dr Ambedkar prodded S.K. Bole, a Hindu Mahasabha leader, to have a popular movement in favour of saffron as national flag. (And lest madam you think it was a “brahminical” plot,  Bole was a leader against the non-Brahmin movement in Maharashtra, that too despite being a part of Hindu Mahasabha!).

When tri-colour was accepted in national flag, RSS felt it was a Western imitation—like the three-stripe flag during the French or American Revolution. Where is India in it, or its glorious past? Green colour was ostensibly meant to assure Muslims who had begun to hold on to “two-nation theory” during pre-Independence years. Should appeasement come at the cost of identity? Why to have a void, a vacuum when India is free to reclaim its heritage?

But once tri-colour was national flag, RSS never once berated it. RSS founder Dr. K. B. Hedgewar never allowed rejection of tri-colour flag.  RSS hoisted it on Independence, it hoisted it when Constitution was framed. For a few decades, laws didn’t permit any institution or group, other than government and its bodies, to hoist tri-colour. Now, since ages, RSS is hoisting tricolour national flag at its shakhas.  Madam, didn’t you hear of tiranga yatras by BJP? Why not visit your own shakha in neighbourhood if you don’t believe me. There is no joining fee, no membership forms no oath of conformity being sought.

Chandhoke has a grouse that history is being rewritten (yes maam, it’s time there is representation of Chandragupta, Krishna Reya, Harshvardhan too and not just your Babbars and Aurangzebs. To let the world know that Taj Mahal alone is not the only beautiful structure in this ancient land of ours).

The next piece in question is by a Michigan professor (phew). The writer too sheds copious tears about India turning into an intolerant majoritarian state.  Intolerant yes, for we did witness a media and academic meltdown on Pranab Mukherjee visiting RSS headquarters. Majoritarian is no crime, it’s just a reflection of facts. He feels let down that Congress has abandoned Shashi Tharoor on “Hindu Pakistan” remark.

This brings us to Hamid Ansari. He feels we have made ourselves a laughing stock in the world by talking of plastic surgery. “Read foreign press, that is usually a good barometer,” Chew your heart out, Lutyens Media! This man who was your vice-president for 10 years doesn’t find you credible.  The former AMU vice-chancellor also lectures NDA on its foreign affairs. “Our relationship with neighbours  is not good…even Nepal.” Err… I thought I read Brahma Chellaney  thus: “When history is written, one Manmohan Singh blunder in particular will stand out for empowering Nepali communists and undermining India’s long term interests—engineering the ouster of Nepal’s monarchy, the symbol of that country’s stability.”

My baton is with you readers next time when you find such leeches in your newspaper.  I am bored, I say.