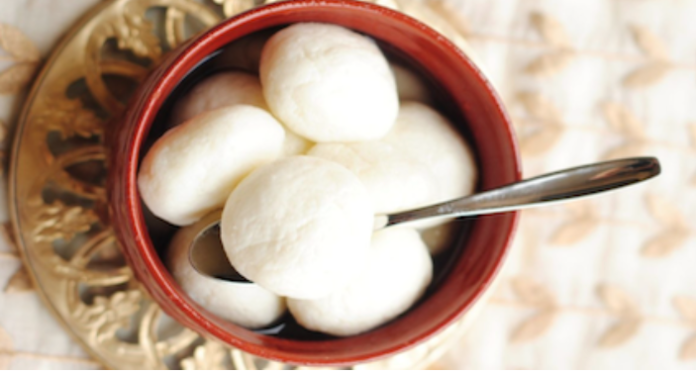 Bengal’s love of rosogollas, spongy balls of ricotta soaked in sugar syrup, is almost 150 years old. But many are stepping aside now, citing health reasons.

The sugary treat has its roots in Portugal, and is preserved in family recipes passed down the generations. Yet it is not exactly the most favoured one in sweet shops across Kolkata and Bengal today.

This does not mean that the rosogolla is off the plate. But there is a clear divide on whether to include these sugar syrup-laced cheese balls on the menu at home or for guests. Many are, actually, avoiding it.

The spongy balls aren’t the problem, it is the syrup with high sugar content which is causing problems for people trying to control their blood sugar levels.

Health statistics from the National Urban Diabetes Survey show nearly 12 percent of Bengal’s population is diabetic. A study at IIT Kanpur showed high prevalence of diabetes in the three districts of Howrah, Burdwan and Kolkata.

“Any intake of sweets is not good for your health. Of all sweets in Bengal, those laced with sugar syrup are the most dangerous. It is good that people are trying their best to stay away from rosogollas or rajbhogs because of their very high sugar content,” says Dr Mahua Sikdar, counted among Kolkata’s top diabetologists.

Dr Sikdar says sweet preferences are changing in the city, and also in other parts of the state because of higher awareness. “Barring one or two big sweet stores, the rest will not showcase rosogollas as their best offers. People are getting conscious about their food patterns.”

In short, the rosogollas are being seen as unhealthy.

Recent research by Mintel India has showed that as many as 22 percent Indians are concerned about their health, especially after the first two waves of the Covid-19 pandemic. And diabetes, blood pressure and being overweight are the three prime concerns. Around 62 percent claimed to have eaten healthier foods in 2020. And 35 percent of consumers said they actively reduced consumption of unhealthy ingredients in their food in 2020 as compared to 2019.

But such warnings do not cut much ice in Bengal, where sweets are so important that shops remained open in March 2020, from 12 Noon to 4pm, when the pandemic was raging. The state government said the decision was taken keeping in mind the sentiments of shopkeepers. Kolkata alone has a little over 14,000 sweet shops. In the big stores, owners have machines which can churn out thousands of pieces in less than ten minutes.

Market estimates show that the sweet industry in Bengal is about Rs 15,000 crore, whereas India’s total sweet market (including confectionery and fast food) is estimated at more than Rs 1 lakh crore.

Bengal’s tryst with rosogollas is indeed unique. The sweet is now slowly – yet steadily – moving away from stores in Kolkata and elsewhere in the state.

Yet, in arguments, Bengalis take immense pride in saying that the rosogolla was first created – they actually call it an invention – by one Nobin Chandra Das at his Baghbazar residence in northern Kolkata.

Odisha residents contest this vociferously, arguing that their experiments with the cottage cheese dumpling dates back to the 12th century when rosogollas were offered at the temple of Lord Jagannath in Puri.

“Both states are very fiercely protective about their own brand of rosogollas,” says one of Bengal’s top food exponents, Pritha Sen.

“Rosogolla is no longer top of the minds of Bengalis. Health-conscious people want to avoid it… The syrup is sticky, unlike a sandesh (a cheese and jaggery based sweet, generally shaped like a carrom board striker) which you can handle with a tissue paper. All sweets have gone through some great experimentations in Bengal, except rosogollas,” adds Sen.

It is a pity, says Sen, because rosogollas – for long – were Bengal’s sweet signature to the whole of India.

Food experts say Bengalis have never liked too much experimentation with rosogollas – as a result, the sweet hasn’t changed much in 150 years. The few attempts to remake the sweet, as Maggi rosogollas, and black currant, strawberry, or green apple flavoured rosogollas, too haven’t found favour with Bengalis.

There are interesting stories about rosogollas. Once, the then Indian PM Rajiv Gandhi walked into a Bengal stall at the Delhi Trade Fair and enjoyed rosogollas with Nicaraguan president Daniel Ortega. The owners of the store, the Mukherjee family of Old Delhi, even exported rosogollas to far flung Latin American nations.

“I agree it is no longer on top of the minds of people but there is a sizeable section of people in Bengal who swear by rosogollas and nothing else,” says Dhiman Das, great grandson of K.C. Das and executive director of KC Das group that markets rosogollas in its trade-marked red coloured sealed tin boxes.

“Traditional rosogolla should never be experimented with. “I cannot teach people how to eat it after more than 100 years. A rosogolla can never be compared with sandesh, it is like comparing Starbucks coffee with Kolkata’s College Street Coffee House. You are actually going nowhere. And yes, do not tell me someone has invented  Maggi rosogollas. If K.C. Das was alive, he would have died instantly,” Das says.

But Das agrees there is a shift, he calls it a drift which is both sad and painful. He says it is up to Bengalis to retain their love for rosogollas.

Once both big and small weddings in Bengal would have thousands of rosogollas in earthen pots, and there would be rosogolla eating competitions among the groom’s side and bride’s side. But today, big or small wedding caterers are told to keep rosogollas off the menu.

Das says his forefather worked hard to make the cheese balls popular in India and abroad. His grandfather, Sarada Charan Das, a physicist, worked under Dr C.V. Raman in Rajabazar Science College. Sarada Charan Das, he says, created India’s first steam machine for sweets in 1945 in British-ruled India. His company has now modified momo-making machines from South Korea to churn out over 8,000 rosogollas in less than ten minutes.

“I know sugar is a problem, we are trying to reduce the sugar content and offer sugarless and sugar-free rosogollas,” says Das.

“Some people are still consuming it, but it’s on a 10:80 ratio. Sandesh, curd, and a few other sweets are now filling the menu cards like never before,” says Abhijit Sen, a top caterer in Kolkata. “Rosogolla is just nostalgia, nothing more. People are very conscious of what they want. They do not want to handle the sugar syrup.”

A top official of Balaram Mullick Radharaman Mullick, one of the top sweet chains across Bengal, said it would be wrong to write off rosogollas altogether.

Sudip Mullick, head of the company, says he noticed how rosogollas were falling off the map and has made a few changes. “We have reduced the sugar content to a great extent. We have different varieties of rosogollas. Well, rosogollas hit the headlines with the news of the GI tag for Bengal but then Odisha also got their tag. So there was no exclusivity factor. So it is up to us to start experimenting and keep interest levels high,” Mullick says.

Old-timers in Delhi remember Atal Behari Vajpayee and Lal Krishna Advani’s love for rosogollas. Both had unique ways of eating them. Vajpayee would have them with the full syrup while Advani would seek rosogollas of smaller size and then cut them up in six to eight pieces and consume just one.

Now, rosogollas are no longer sent as gifts by politicians from Bengal who are, otherwise, very protective about sweets produced in the state.

In north Kolkata, partners in the century-old sweet shop Girish Chandra Dey and Nakur Chandra Nandy, say their favourite sweet is not rosogollas but hard-baked sandesh. “Rosogolla did not appeal to our forefathers,” says Prajesh Nandy, whose shop has sweets named after cricketers Sourav Ganguly and Sachin Ramesh Tendulkar.

Irrespective of the big divide, the tradition of rosogollas continues. Nitai Ghosh of Chittaranjan Sweets, which specialises in producing rosogollas, says: “Rosogolla, for us, is like offering a slice of civilization… Hundreds of people come to our stores to buy rosogollas, they do not check the sugar content of our products.”

(NewsBred adds: Sweets based on channa (split milk solids) like Sandesh and Rosogollas were once banned in Bengal, believe it or not. On August 23, 1965, Congress chief minister of Bengal, Prafulla Chandra Sen had done the unthinkable. His logic: the daily supply of milk in Bengal is only 3 ounce per capita whereas it’s 17 ounce in Punjab and even 4 ounce in Bihar! It was a dark time for Rosogolla industry in Bengal. Read all here).