BJP, Citizens, Media: The good, bad and ugly which miss us 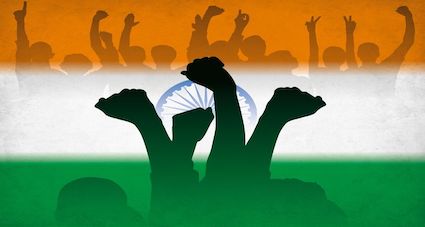 You cast your eyes around India’s map, pore over its 28 States and 8 Union Territories and see BJP shining though our newspapers don’t know it.

I mean we get our daily dose on Uddhav Thackeray, Arvind Kejriwal and Captain Amarinder Singh; Mamata Banerjee and Pinarayi Vijayan appear with their respective scowls and hideous smiles, occasionally Ashok Gehlot clears his throat; Hemant Soren and Bhupesh Baghel choose full-page advertisements to register, but nothing on how BJP straddles India.

A new credible survey (C-Voters) mapping 30,000 in all 543 Lok Sabha seats shows Narendra Modi brooking no opposition; favoured overwhelmingly even in West Bengal; and guess what, even Delhi and Punjab see nobody as his alternative to governing India. Not even Jammu and Kashmir if you think his name is an anathema to our biggest minority.

How long before our prepaid media gives up on the above names and serve us something more refreshing? I mean do we deserve Thackeray and Kejriwal repackaged everyday, airbrushed of their Covid-19 scoresheet? The only time Capt Amarinder Singh interests me is when his Pakistani muse is dug up by portals what had long been buried by the press. What kind of air Rest of India is breathing out of Hooghly? Political murders, scams and defiance to Centre? And Kerala as if extremist Islamic organisation PFI (Popular Front of India) neither originated nor is busy in arson and anarchy?

But such names are never questioned on their duplicity. But it’s good: Those who matter, the voters, have their own tabulators. Slowly our Akhilesh Yadav, Mayawati, Abdullahs, Mehboobas and Azam Khans stop stirring. No more those brazen finger-wagging and “On-my-dead-body” flourish. They took the focussed camera for real when all the Press was doing was stuffing zeroes to their own account. Media is never a friend; was never a friend. All that matters is which side butter is.

This Media is never telling us about India. That a party which didn’t have one NorthEastern state in its roll till 2016 today is either ruling, in alliance or in coalition in all of eight NE states. That even a Christian Mizoram is beholden to them.

Let’s linger on this NorthEast bit. Why it doesn’t register that it’s a Gateway to India’s “Act East Policy”? A region which could launch a million projects and a billion dreams? All those roads, airstrips, ships leaping out to South Asia in trade, transport and tourism? Anyone against infiltration? Any sweating if China could repeat a 1962? NO. It didn’t matter to our first rulers of free India and by default hasn’t to lackeys.

When India makes a dent in Telangana, we are told lullabys. When Bihar is retained against all odds, Who-Let-Us-Down is bigger noise than How-They-Won dialogue. We have a party which is much more than just in India’s heartland. But blame it on communal politics, not credit that Centre-Citizens could be on the same page for what is best for India.

The goal is to fool us citizens into making wrong choices. The obvious steps are:

One, you shall not praise BJP even if the Corona has been culled. Your Books, Arts and Entertainment page would still have an overrunning interview of a newbie who has understood that a Migrant flick with emaciated actors and cheeks in glycerine is his ticket to fame and funds.

Two, you should have events which could bring the Modi government to knees. Thus you would’ve Singhus and Shaheen Baghs for poor farmers and pitiable minority. Even as they defy logic. Even as they mock your own Parliament; your own Judiciary which runs and upholds the Constitution. Pour as much abuse, as much scorn as you could.

Three, slip your garbage below doors in distant lands. All those Smiths and Harrises can’t have enough of it. They are history’s descendants who don’t like us pursuing our own faith, own trade and own ownership of resources.

I do feel Indian citizens need to have a Media Strategy. Keep buying the rags but be vigorous in pinning down its agendas. Bring it to the notice of fellow readers, pass a tweet to authorities, alert the cops of stuff which incites. Don’t leave everything on Centre and Judiciary; bring your own game. Hit the streets where the battle has shifted.