Christchurch attack: Past is casting a long shadow on present and future 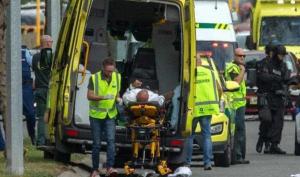 Basic facts about the horrific Christchurch attack are thus in order: On Friday, a gunman strolled into a mosque on Deans Ave, and live streamed his attack with a semi-automatic weapon. A second shooting occurred at a mosque in Linwood. So far 49 are dead- 41 at Central Mosque and 7 at Linwood Mosque. One died in Christchurch hospital. Other 39 are in hospital, 11 of which are critical.

Brenton Tarrant, 28, has been charged with murder and was arrested from a car which had two bombs but fortunately remained unexploded.

A 74-page manifesto, titled “The Great Replacement”, had been compiled by Tarrant. In brief, it mentioned the terrorist attacks by fundamentalist Muslims in Europe in recent past. The growing immigration, of Muslims and others, in Australia and New Zealand apparently had caused the trigger.

A look at Islamic terrorism in Europe in the aftermath of 9/11 is unnerving. Wikipedia puts the number of acts of Islamic Terrorism in Europe to 52 since 2004. It includes Madrid and London train bombings, Glasgow and Frankfurt airport attacks, Stockholm bombings, Toulouse and Montauban, Copenhagen shootings, Istanbul attacks and much, much more.

While Europe has been subjected to acts of terrorism, a sideshow has always been an attempt in European/US political and academic circles to put it down to individual acts and never traced to the violent ideology of Islam. A lot of it of course was moved by the noble desire for cultural healings and integration of different cultures in the melting pot of European and US milieu. Thus, in many cases, terrorists were mentioned as “shooters.”

Salman Rushdie, for instance, was extremely frustrated that when a “fatwa” was issued against his name after the publication of “Satanic Verses”, most of the Western leaders, newspapers and academicians simply looked the other way. He had really found it incongruous that when Charlie Hebdo killings happened in Paris, most newspapers published the news and subsequent developments without quite elaborating on what actually had led to the shooting in the first place. “How can you write a story without mentioning the background,” he had wondered though not in exact words. Western newspapers in England and United States were quite afraid to publish the cartoons and illustrations around Prophet Muhammad which had outraged the shooters into taking the extreme step.

Western powers don’t encourage a public discussion whether Islam has a violent ideology. There has always been a concrete attempt to browbeat all those who advocate discussion on Islamic ideology and its Book “Quran”. Those who profess reason and logic feel helpless and frustrated when a debate with Muslims scholars and Imams is sought on the Book but its’ never encouraged. Instead, its’ seen as an attack on Islam. This leads to complete breakdown of communications between the two sides. Instead, hostility starts to creep in on either side which leads to incidents like the one we have witnessed in Christchurch.

Wikipedia again has a list of serious critics of Islam who are hardly allowed a voice in mainstream media. Tommy Robinson is one in England who has dubbed the killer in Christchurch as a “monster” but is aghast that Western media has somehow sought to portray him as a symbol of “white supremacist” and somehow “associate me with a coward at the other end of the planet.”

From the point of view of an average Muslim, in the wake of 9/11, then US President George Bush and UK Prime Minister Tony Blair used the fake Iraq-has-WMD theory to devastate Middle East (and Afghanistan). It made millions homeless and refugees and gave birth to Islamic State who harnessed this anger and caused dozens of attacks in Europe in retaliation.

The dichotomy in the Western approach is apparent.

Even though they discourage the assimilation of refugees from Middle East within their fold, or concede that the wars it waged has devastated Middle East in the first place, they offer homilies and platitudes in public discourse through their Elite-controlled media, academia and activists.

They praise Islam as a “religion of peace” (Christopher Hitchens once wondered how a religion which deny its’ women most common rights could be termed a religion of peace) and acts of terrorism as one of “individuals not of ideology.” Yet, no such virtue is attributed to Shia “houses” such as Iran and Syria. In practice, the Western world has devastated Middle East more than at any other time in history.

“White Supremacists”, like the Christchurch killers, resent immigration which is on rise even though refugees have no takers. Coarse minds like Brenton Tarrant churn over the past attacks in Europe and increasingly see men from East in flowing beards in their neighbourhood. Like the Roman Empire and the colonial era, they suspect everyone outside their fold as “barbarians.”

The faultlines in Western societies could only be cured if (a) West pulls itself out of Middle East and acknowledges its role in its devastation and helping terrorism; (b) The fundamentalists in Middle East allow a healthy debate on “Quran” and don’t invoke fear in the questioning minds; (c) Sane voices within the Islamic fold force such changes without leaving the Book and its interpretation in the hands of the Mullahs alone.

It’s a tall order but not impossible. After all, Islam has successfully moved away from the Quranic doctrine of slavery. Religion ought to be organic and not static. It needs constant enquiry and must not be cast in stone.

Identity plays such a strong role in the lives of individuals and nations. It’s beginning to assert itself either side of the great divide in our times.