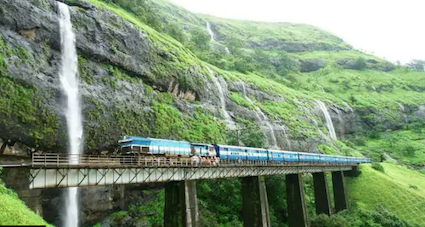 Riding a train through rural India during the monsoons is a feast for the eyes and a huge learning curve for those people whose open eyes take the path forward to an open mind. Certainly, those impacted by climate change and floods deserve a much better deal, but the sheer joy of nature’s bounty on display over-rides everything else.

Boarding and disembarking trains at railway stations in urban India has become better by quantum leaps in the last few years – especially in the intervening period during the Pandemic. The cleanliness has to be seen to be believed – small wayside stations to huge terminals and junctions – and at night, well-lit end to end.

Going through the intermodal transfer from road transport to and from a railway station has become worse than what it ever was – the VIP Lanes have become wider and the citizen is at the mercy of the elements as well as all sorts of hurdles. The pavements have been grabbed by all and sundry even more – and as for hygiene?

The last train ride I took was way back in March 2020, as part of a train + airplane + ship + bus + car kind of trip across India. A book that did not happen as somehow it did not appear to be relevant anymore during the Pandemic. I mean – joys of travel in the times of COVID?

Almost a year and a half later, vaccines as well as antibodies in position, armed with an RT-PCR negative report, I hopped on to the first leg of a long haul. Delhi to Bengaluru by my not the most favourite train, the fully air-conditioned Rajdhani Special. I prefer the Sampark Kranti on the same route, via Secunderabad, for multiple reasons – it has fewer stops, I can ride in non-AC Sleeper and the joys of 2 days/1 night means I see more of India through open portholes, than the 2 nights/1 day which the Rajdhani provides from behind tinted windows. Besides, I do think that fresh air works better in these days than re-cycled stuff, pumped out of ducts which are probably not as ship-shape as I would want them to be.

Curtainless tinted windows are now the standard onboard AC trains, I may add, and you are inspired to bring your own linen. Plus, no more regular food service, replaced by a pre-cooked micro-waved type of option. First observation – private enterprise onboard by catering staff has resolved these new rules. So be it – in a manner of speaking, along with the option of ordering food delivered to the seat en route, this has truly improved the sanitation onboard. People still appear to have a reluctance to carry the trash and garbage they generate to the trash cans in the vestibule area, though, which is something that appears to be hard-wired into almost all of us. I would love to design a clean trash compactor which can be installed inside the coach.

The train is surprisingly almost full in 1AC, at about 25% in 2AC, and then again around 50% in 3AC. The daylight part of this train’s timetable takes one through dawn after Bhopal and evening twilight after Secunderabad. In between lie some of the prettiest parts of India, be they the forests or the ghats, as the route threads its way skirting Pench, Satpura and Melghat Forest Reserve areas. For those concerned about a major trunk route so close to Reserve Forests – please be aware that this is one of the oldest railway routes in India, pre-dating Independence. And the large number of tunnels, viaducts, animal crossings as well as undisturbed forests en route are a living example that co-existence is viable.

That this route also provides travellers with a brilliant view of the way the Ganga and Yamuna flow East, followed by the Chambal that kind of manages to link both Eastwards and Westwards, and then crosses the Narmada which flows in a Westerly direction towards the Gulf of Khambat and soon thereafter traverses the mighty Godavari flowing in an Easterly direction towards the Bay of Bengal – all this in less than 24 hours. Later at night the Krishna and Tungabhadra will also energise the train some more. Criss-crossing rivers flowing in opposite directions is something that gives pause to preconceived notions on the environment – more on that some other day.

Once South of Bhopal, post dawn, the revival of the goat in agriculture appears to be growing by literal leaps and bounds. Buffaloes are hardly to be seen lazing in water bodies, bulls are busy doing what they do best, and sheep grazing in what can best be described as pastoral grasslands, are all over the place. A farmer travelling from Secunderabad onwards at night explains the economics to me –

-poultry is no longer remunerative, or interesting, there is too much that is wrong. And bird flu is a real problem.

-bovines are expensive, and loss by theft is a big risk, besides, transporting the meat has its own issues.

-goats and sheep, a flock of 200-250 requires only 4 dogs to guard them, and the prices of their meat as well as milk are very helpful.

Goat shit, in addition, is literally worth its weight in gold. Suitably enlightened, I also observe the increase in meat products on sale at railway stations once past Nagpur, including mutton. The myth that South India is vegetarian has bundled the rest of us far too long. A brilliant serving of mutton chops at a railway station late at night in Karnataka, grilled to perfection without gravy, served with a simple tawa roti says it all better than anything I have eaten on the trains for a long long time.

So, does one travel to eat, or eat to travel? The jury is out on that one, but here’s a simple fact  – food breaks barriers on trains, and the conversation stays away from politics as well as religion. Through the night, as the train races South though the forests North of Bengaluru, the conversation meanders through food, sports, agriculture, monsoons, culture, gentle leg pulling of the only North Indian in the group (yours truly) and then, from one of the Railway employees who joined on sports quota but stayed on because he loved travelling the length and breadth of India – the assimilation by democracy of and in this wonderful Nation, India.

Joined by steel, clattering away below us, in a train that says – we shall defeat this Pandemic. For there is one huge fact that links all of us on the train – the hope that it shall only get better. The massive new freight lines coming up all over the country – more on that soon too – are witness to this path forward.

I was recently visiting the Balearic Islands in the Med to meet up with family and friends as part of some ongoing celebrations. Having...