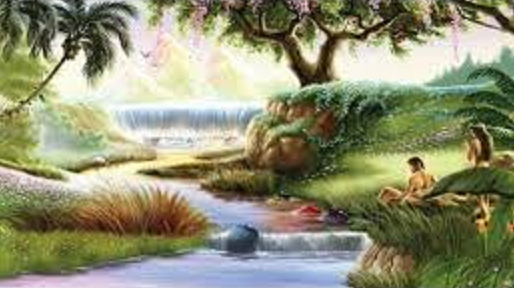 Although the Rig Veda mentions various rivers, it’s the Saraswati alone which has been referred to more than 50 times in it. Not only she is mentioned as Naditama, but also as Devitama. While she carried enormous water in her flow she had as many as seven tributaries as is evident with the use of epithets as Saptavasa (One who has seven sisters) in Rig Veda.

The Saraswati River has fascinated historians, archaeologists, geologists & scholars throughout the world since time immortal. Harappan findings & studies clearly confirm 80% of settlement of that age around Saraswati while the rest around 5% only was around the Indus River (Indus Valley Civilization).

As per Yajurveda this mighty river was formed by the amalgamation of 5 might rivers – Drisadvati(Chautang), The Shatadru (Sutlej), Chandrabhanga (Chenab), Vipasa (Beas) & Iravati (Ravi). From Atharva Veda, Vaman Puran or Manusmriti to contemporary Vedic literature evidences and mentions are galore to prove its exsistence.

Saraswati finds two major references in the Bhisma Parba of Mahabharata when Balaram decides not to participate in the Kurukshetra War and decides to go on a pilgrimage along the Saraswati visiting all the holy towns up North right upto present day Taxilla & then again in the Shouptik Parva when he comes back at Kurukshetra to play a pivotal role in the mace combat between Bhimsen & Duryoadhan on the banks of Dwaipayan Sarovar (current day Ikkas town located in Jhind District of Haryana).

While there are many myths around the disappearance of this mighty river and very recently the ASI has made considerable progress in locating its origin, path & final emergence into the sea, this Vedic river has intrigued researchers for long. As per eminent geologists VMK Puri and BC Verma the reason of disappearance of Vedic Saraswati can be attributed to a major tectonic movement in the Himalayas around 1900 BC. It’s sisters feeding the Saraswati, The Shatadru and Drisadvati changed courses coupled up with the techtonic upheal in its sources at Upper Himalayas led to its drying out. And at the end of the Kurukshetra War, it’s mentioned that Saraswati had remained Red for a long time with the blood of all those slained in the battle.

Interestingly few years back a sub-surface water burst out within a pond at the Kapil Muni Ashram (image below) lead to a multi- disciplinary team lead by Rajesh Purohit, conducting a study and concluding that the this water belonged to Vedic Saraswati as described in the Rig Veda.

The search of Saraswati promises to uncover the remains of numerous civilizations which this sacred river nurtured on its banks. The Soul of Bharatvarsh lies embedded in this extinct river.