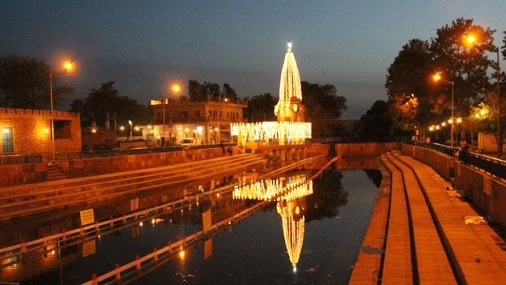 (This is sixth piece a long series on the epic Mahabharata, marking legends about the venue which exist to this day, timeless in glory and reverence. The 1st, 2nd, 3rd, 4th, 5th could be read here , here , here , here, here).

Located 27 kms from the City of Kurukshetra, Pheowa derives its name from the Sanskrit word Prithudaka. The Word Prithu means the best and udaka stands for greatest happiness. The origin of it is traced back to Rig Veda and Atharva Veda which mentions of King Prithu the first coronated king on Earth who played a major role in introducing agriculture and cultivation of seeds to humanity and also went to the extent of flattening hills to establish civilizations. Pheowa was founded by him and hence this is place as old as the Rig Veda.

While the Kurukshetra War was fought over a total area of 192 kms (48 Kosh) spread across Jhind, Kuruskshetra,Karnal, Palwal, Panipat & Kaithal, Pheowa is on the Western side, where Yudhistir guided by Dwarikadhish Sri Krishna had performed the Shraddha ( last rituals) of the 4 million men slaughtered in the battle of Kurukshetra. post which the duo lit two lamps in the nearby Kartikeya Temple which even today keep’s burning.

During the Third Battle of Panipat, Shrimant Sadashiv Rao Bhao decided to camp with his Maratha Army here in Pheowa before launching a full scale attack on Ahmad Shah Abdali, considering that he was having with him almost a lakh of civilians who accompanied the Maratha Army for pilgrimage.

It was during this two month stay that he built the Pashupatinath Temple in resemblance to the Kathmandu’s Pashupatinath, wherein the Lord Shiva Lingam has four heads. It’s a grand temple built on a raised platform and the Lingam is made of touchstone.

While Pheowa has numerous ghats, and temple’s but it was the sacred Saraswati river which flowed by it’s side made it so special wherein as per Rig Vedic rituals and having created by Lord Bramha himself also made the Pandavas & Sri Krishna select this for the final rites of the departed soldiers & chieftains. While it’s said that King Prithu had also performed the funerary rites of King Vena, his father, the tradition of offering the Sharaddha even continue’s today. After Gaya (Jharkhand) & Jajpur (Odisha) Prithudaka or Pheowa is the only other place wherein the last rites of Sharddha is considered extremely purifying.