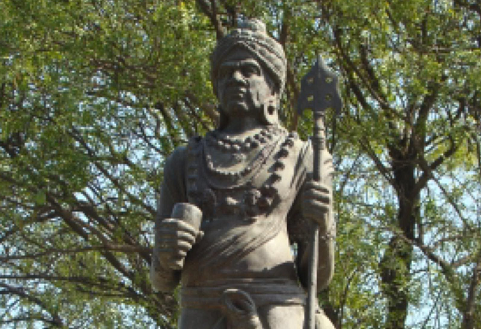 So who are these Yakshas who were feared? Were they tormentors or protectors, or simply creatures from the cosmic world. For centuries and ages, these questions have occupied us. People continue to be worrisome to them. As you take a round of the 48 kos (192km) of battlefield of Kurukshetra, we are introduced to the four Yakshas or the guardians of Kurukshetra. Without knowing them, Kurukshetra is not complete.

The word Yaksh means mysterious, supernatural manifesting itself suddenly. They are creatures described in the Rig Veda, Atharva Veda as a mix of both benevolence and evil. If we look into Shivopanishad, it recommends they be destroyed. They have been recognized in Buddhism and Jainism as well.

Kurukshetra is protected by the four invinciple Yakshas—Ratna, Arantuka, Kapila and Machakruka. They are mentioned in the Vaman Puran as well as in Satapatha Brahman, besides in the Buddhist text of Yaksha Chaitya.

These four Yakshas are the guardians of the four corners of Kurukshetra and are considered both helpful and destructive. Distinguished by their muscular builds, bulging bellies, turbaned heads, scarf on the shoulders and arms, dhotis neatly worn, heavy earrings, they denote power, wealth, as well as protectors and guarding angels.

Unlike the texts I have mentioned, in Jainism a Yaksha is always attached to a spiritual master. They are considered demigods of intermediate status. We have known through Vedas and Upanishads that the king of Yakshas is Kuber. The same is mentioned in ancient literary texts of Lord Sri Vishnu, who pleased with the penance of King Kuru (founder of Kurukshetra) assigned a Yaksha named Chandra to protect Kurujangla (ancient name of Kurukshetra).

·         The northeast corner of Kuruskhetra is protected by Ratna/Ratnuk Yaksha, located at Bid Pipli on the bank of now-extinct Saraswati river;

·         The northwest by Arantuka, in the village of Beharyakh, now in Kaithal district of Haryana;

·         The southwest corner by Kapila or Ramahadra, situated in Ramraj in Phokarkheri village of Jind district in Haryana;

·         And Macharkruka, located in the southwest corner in Village Sinkh in Panipat district.

Yakshas have long been worshipped in the Indian sub-continent since the Vedic ages. Over time, the Yaksha cult has evolved into Tantrism and Shakti worship. While Lord Buddh travelled from Hastinapur to Gandhar, he was accompanied by his close disciple Ananda and a Yaksha called Vajrapani. Through the annals of time, we may have forgotten the Yakshas but their legend endures. They continue to remind us, through Kurukshetra, India’s glorious Vedic culture and replicated in other forms across Bharatvarsh.