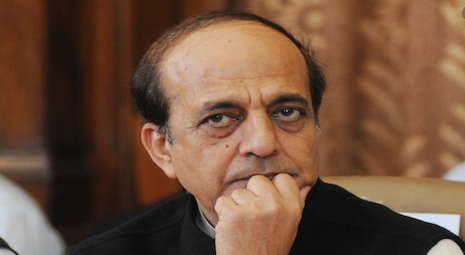 Dinesh Trivedi, who recently resigned as a Rajya Sabha member of the Trinamool Congress, says his party ignored his advice for peace and development in Bengal, all he got was a bed of arrows like Bhisma Pitamah, the iconic character from the epic Mahabharata.

“I wanted to be a bridge-builder between the state and the Centre but Mamata Banerjee’s ego killed everything,” Trivedi, a founder-member of the TMC, told in an interview at his residence.

How does one build a bridge of peace and development between a state and the Centre?

Trivedi said a good rapport with the Centre is always beneficial for a state in the Indian federal structure. He said he knew building Bengal’s bridge with the Centre was a tough call, a state which has played the victim card for over four decades.

The job was tough, almost like that of British engineer John Henry Pattterson, a fictionalised character from the 1996 movie, The Ghost and the Darkness. Patterson helped build the Uganda-Mombasa Railway in 1898 only after he managed to kill two maneater lions in Tsavo and quell a rebellion among migrant workers from Africa and India.

Trivedi almost did the impossible after TMC swept to a great victory in 2011. Worried about the implications of Tata Motors departure from Singur, he met Tata super boss Ratan Tata at a resort in Thiruvananthapuram and asked the patriarch to return to Bengal.

Trivedi had a plan in mind, it was going to be a win-win project for the conglomerate and the state. The villagers in Singur would take back their land, end the 99-year-old lease with the Tatas and then, within a week, sign another 99-year-old lease and return the land to the Tatas. No jobs were promised by the Tatas but there was talk of monthly rent and making the villagers equity partners in the project.

Ratan Tata was apprehensive. Will TMC agree, he asked Trivedi. Trivedi said he told Tata that he was hopeful. “And what do I see in return? An ordinance issued against the project. If the project had received clearance from the state government, it would have had an electrifying impact. Eventually, I cut a very sorry figure in front of Ratan Tata,” said Trivedi.

Trivedi said there was a spate of incidents (read insults, violence and abuse in that order) that pushed him to resign from the party. Once he made the announcement on the floor of Rajya Sabha to the shock of TMC members, he drove straight to his home from Parliament and walked into his glass-panelled prayer room. The Sun had set on the Indian Capital, Trivedi offered his evening prayers and then blew his conch shell.

The TMC thought he was blowing the Panchjanya, the conch shell Lord Krishna blew before the start of the epic battle at Kurukshetra. Rumours flew thick that he was all set to get a Rajya Sabha seat from Gujarat, and that he could be in the race for a berth when cabinet expansion happens at the Centre during the fall.

Trivedi laughed. “It was a part of my routine prayers, except I got photographed while blowing the conch shell. Let speculations fill the air. What is politics in India without speculations?”

Political cognoscenti in Bengal said the move will definitely impact the TMC because Trivedi was seen as a complete gentleman. During TMC’s internal meetings, Trivedi often raised issues of being “controlled” by a corporation (read Prashant Kishor’s IPAC). In short, he had disliked the way in which the poll strategist was handling the social media accounts of party functionaries and allegedly controlled every political decision.

Trivedi was also upset at the attack on the convoy of BJP President JP Nadda during his visit to Bengal in early December 2020. He condemned the incident and expected CM Mamata Banerjee to call Nadda and regret the incident.

She did nothing and, in turn, blamed it on BJP workers and said it was their handiwork. “But the fact that I had condemned the incident was noted by the party high command and I became a subject of ridicule.”

He said he offered his Twitter account to the TMC’s IT cell but was horrified to see abusive language being used by the party against Bengal governor Jagdeep Dhankhar. The governor took to Twitter and said he would not engage because he knows Trivedi would not use such abusive language.

Trivedi said he lost his cool when the TMC IT Cell used his Twitter to abuse Prime Minister Narendra Modi in Hindi. “I told them that I will take action against them. My action was seen as an act of rebellion. I was asked why I was afraid to curse the BJP? And when I resigned, they deactivated my account immediately. This shows how much respect they have for a senior party functionary. I tried hard, really hard to reach out to the party high command to raise issues vital to Bengal but each time I hit a wall.”

Trivedi, who once won the Outstanding Parliamentarian award in 2016, says swearing and cursing are often used interchangeably, but there is a subtle difference in their origins.

Trivedi said the TMC is pushing an agenda that is worrisome. Their slogan talks of violence. Lorai, Lorrai, Lorai  Chai, Lorai Kore Bachtey Chai which translates into We need to fight, fight, fight and fight to live.

Trivedi said he was severely reprimanded by the party when he said he did not approve of the slogans. “I asked the TMC workers who they will fight? And will violence bring business to Bengal? The workers were not keen to listen, they were following orders from the party high command.”

Trivedi said Bengal’s constant denial of Central projects is causing trouble for those who live in the hinterland. A state help and help from the Centre will mean more cash for the poor but the Bengal government will not allow Central schemes to work in the state.

Every time Trivedi wanted Banerjee to talk to Modi about big projects he was asked to lampoon the Prime Minister. Trivedi had met Modi when the BJP-led National Democratic Alliance (NDA) swept to power in 2014.

The PM was keen to push projects to Bengal. Trivedi said he remembers Modi’s first visit to Bengal where he told Banerjee to hold forth in Bengal while he (Modi) would do the same at the Centre.

“All Modi got in return was ridicule and nothing else. Banerjee said she will put Modi behind bars. I tried telling her he (Modi) became the PM after his party swept to power. He was an elected leader but she would not listen. The state government lost out on some big projects when I was the Railway Minister and asked to resign because I had marginally hiked some fare in the rail budget. I told her that for me the nation comes first. I had once told her that those caught on the sting camera in the Narada Television case need to be kept at a distance but she did not care. I am used to her erratic and rude behaviour.”

Trivedi didn’t. Others in TMC did.

He said the cut money culture (pledging money to local politicians to see through projects), which the state government has admitted on record, was eating away the very fabric of the state where big corporations fear to pledge cash for investments. He said summit after the summit has got nothing to Bengal.

Trivedi said life is going on in Bengal, but things feel and smell different. People who haven’t needed an inhaler since their childhood are now using them for the first time in decades.

“For everything there is cut money, goons landing up at your homes, local club boys demanding cash for almost anything and everything. The message is simple: If you want to survive, just sign into TMC. Else, there could be trouble. Violence has become a part and parcel of life in Bengal. The problems are many, and the problems have spiked. And you cannot complain.”

Trivedi said he told the TMC high command time and again that the party needs to discard negativity. He offered his cooperation to the party to speak to industrialists and bring them on board. “I repeatedly told the high command that let’s salvage the situation, I told them Bengal needs to respect people. The outsider argument will not work, we need to push big business in the state.”

Trivedi said no one cared. Worse, some MPs in the party actively campaigned against him.

Ever since he resigned from the party, Trivedi’s handset has been full of messages from friends congratulating him for his decision, some warning him to be careful when he returns to Bengal. Some even suggested he hire private security.

Trivedi would do none of that. He has told his friends that he will return to Kolkata soon, and he will not hire gunmen for protection. He said he feels sad, there are times when he seriously introspects about the state he loved and represented for many years.

Once an insider, Trivedi has now become an outsider in his home (read Bengal).

(This is a reprint from MoneyControl).

Once a TMC strongman, now cowering like a petty thief

Trinamool Congress (TMC) leader Anubrato Mondal, now in the custody of the Central Bureau of Investigation (CBI) on charges of smuggling cows to Bangladesh,...