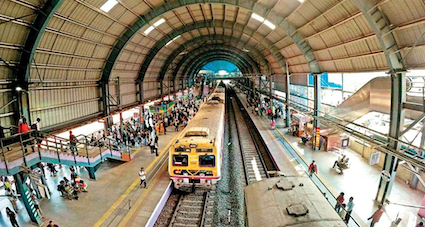 There are train journeys that you know will begin and end well when the young cab driver early in the morning is Shravan Kumar. On the way to the railway station, our young man tells me about his experiences with different types of passengers, and how they react to his name.

At Nizamuddin Railway Station, my train is on the island Platform 4 and 5, which typically entails a hike on the overbridge. My preferred route, however, is to go to the North side of Platform 1, cross using the path made out for hand-carts, and then walk some more to the same North side entry of Platform 4 and 5. This time there was a long goods train blocking that option.

A gentleman who looked absolutely like the security personnel in civvies that he was, strolled up and asked if he could help me – and carried my suitcase all the way back the long way up and around.

While boarding 2AC, I could not help but notice a largish group of about 50-60 young people, all wearing track suits of a particularly strong government department, also waiting to board the same train. It reminded me a lot of how it used to be when we travelled as a group when we were cadets. They were with us till Vadodara, after which they were off to attend a conference, being held at the Statue of Unity, on the Narmada. At Vadodara, they all became serious and lined up, because their Instructors were travelling 1AC.

My train for Goa left the platform dot on time, and a comfortable journey was on the cards, when within the first few 100 metres I realised that all 8 wheels of this particular refurbished 11 year old 2AC LHB Coach were probably new and perfectly round. This is important, because even one wheel that is slightly eccentric or has a flat patch or a wheel set that has anything off, can make a journey miserable – especially at high speeds. As a result, even at sustained high speeds, the coach was on song all through. Which is essential, because the turns and twists of the Vasai to Panvel line and then the Konkan Railway come at night on this train, and a comfortable sleep can be ruined if the wheel set is improper. As things transpired, I slept through the night, without being woken up by high-speed vibrations.

During the day, I had for company people from a mountainous border State, whose first point information on some matters was of great interest to me.

The huge benefit of travelling by train, is not just meeting different people, but also looking out of the windows into Bharat which usually begins within minutes of leaving any large railway station. Unlike when you travel by highways—where new cities mushroom—or by air, Bharat is going about its work mostly undisturbed by what the cities think that Bharat should do, and that is the big take-away on which the next article shall expand on.