Diwali and the absurd criminalizing of a civilization: Back to George Orwell’s dystopia in India 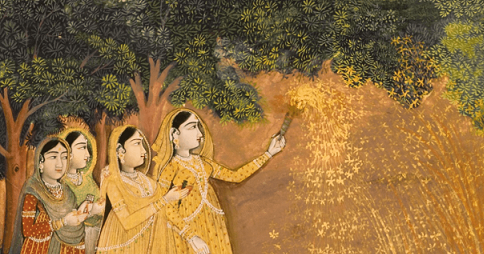 Air quality in Delhi at the quietest time – dawn–is like this, on the day before Diwali (see image below). And a complete civilisation, a culture spread from Indo-China to India and now to the rest of the world, is being made to not just feel guilty but has been pre-criminalised as well as sentenced in a vicious attack on something which is one of the few opportunities left for psychological repair and positivity before the harsh winter and projected re-arrival of the pandemic. Diwali is so much more than just a festival for North Indian Gangetic belt Hindus — it is now global.

But in Delhi? The Police are out to catch you. Do they like this job? See their own body language, the Police are also like us, and they are a Service – not a Force.

So therefore? Sit at home, feel guilty, watch the aptly named idiot box. With or without fire-crackers, it is not safe to go out, for anyone. Sent out a tweet to this.

This article is an expansion. Not in anger. But just looking at the absurdity. That to celebrate Diwali only the rich will go abroad henceforth? We have been criminalised before the act, for something which we all know we are all not responsible for, even the poorest and weakest know the truth – atmospheric pollution is caused by dozens of other activities. But revenge on a particular community is secular In India. Where gunpowder was invented, where generations learnt how to fight invaders using fire, before laws like the present one made us a Nation of what, slaves?

We have been criminalised in our homes.

One reason I stopped being an active seafarer was this: I saw up-close and first-hand how the criminalisation of senior officers onboard was used as a method by the complete maritime administration and linked entities to absolve the real culprits. We were certified and competent mariners, but our primary role was to go to jail for any event which could in any way be construed to be illegal anywhere in the world, while the ship sailed onwards with a new name, new flag and new crew.

It was and still is like this–there can be 100s of reasons for oil-spills, or a collision, or a fire, or death onboard. But it is pre-ordained that the man in charge is guilty, preferably also dead, while business goes on as usual and laws are amended even more to ensure that the rope fits the nearest neck.

Dozens of buildings are being rebuilt the same way they were decades ago–using thinner and oil-based solvents for everything, for example. With stronger solutions. Which in turn evaporate into the air rapidly. Think about it because you can’t smell it, and it is easier to blame public transport buses. Nowhere else in the sensible civilised world are heavy tolls levied on public transport while private motor vehicles are allowed in and out free. Which is why it becomes cheaper to ride a two-wheeler from NOIDA to South Delhi than take a bus. Go figure.

Automobiles of all sorts, new or old, registered or unregistered, genuine or jugaad, badly maintained-longer service intervals and difficulty to clean them means engine air filters remain choked for months. Who suffers? The PUC certificate?  Joke of the last few decades if you have really looked into how PUC certificates are issued. And how people are caught for expired PUC certificates.

Easy to blame farmers. But what are we doing about the 100s of gensets for telecom towers, hidden on rooftops, which can easily be tracked by drone cameras if the wish to do so is there. Our Pollution Control Boards don’t even know how to measure radiation as a form of atmospheric pollution – believe it or not, that is left on self-certification by the Telecom Tower operators. This, again, is unique to India. It is like people self-certifying their own driving licences.

Criminalising a festival is the easy way to hide the Truth, and the Truth is that all the organs and pillars of the State have miserably failed us in controlling pollution – so what next? They and their upper-end supporters will criminalise a complete civilisation. In my area, for example, mosquito control was put on hold because of pollution control. How daft could that be?

So therefore, make a complete community feel guilty, criminalise them.

Community display? Laser show? Pyrotechnics? Sound-and-Light shows? Nope, not allowed, the Police is there to get you. Your festival is the biggest pre-decided culprit. While the rest of the world will have fire-works in crystal clear skies.

Back to George Orwell dystopia in India, born in Motihari, Bihar. The only option left is to protest – should we drive around with hazard lights on, they are also amber or saffron in colour and thus liable for our arrest?

I leave you with these images to see yourself in mirror. Again.