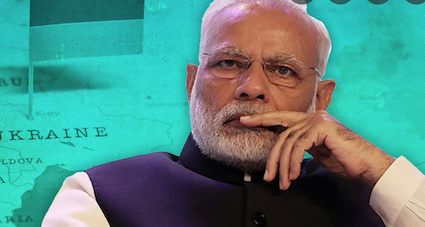 Indian Express has today published an OpEd by one Anastasia Pillavasky of King’s College London—“Dear Indian friends you are on the wrong side of history”— which is a fit case for slapping Section 505 for “causing fear and alarm to the public” for India’s continued neutrality in the Ukraine Crisis.

The writer has sought to stoke the fear of Indian citizenry, threatening that either India takes a stand against terror or join “Syria, North Korea, Eritrea, Belarus: Does India belong to this club?” (The implied threat is either India becomes a global outcast like North Korea or arguably face a civil war like in Syria or become a sidekick of Russia like Belarus).

The language of the piece is reprehensible, made worse by comparing our Netaji Subhas Chandra Bose with Stepan Bandera, arguably “one of the most hated man who ever lived.”

The writer, in this poisonous piece, of lies and more lies from both sides of her mouth, has based her arguments on primarily five points:

Here’s a rebuttal to these five positions:

IF US PRESIDENTS HAVE SUPPORTED RUSSIA AND NOT UKRAINE

Now let’s look at how “friendly” US regimes have been to Russia since the dissolution of the Soviet Union in 1990s:

(Its said that this was not in writing: Well now the records of National Security Archive at George Washington University’s website confirm it was in writing.)

It was Bill Clinton who began expanding NATO in his second term: Poland, Hungary and the Czech Republic were brought in in 1990s;

(Even the hawk George Kennan thought it was the beginning of a new Cold War. “Russians will gradually react quite adversely…I think its a tragic mistake.”)

The new Russia, after the dissolution of USSR, was at the mercy of United States. Boris Yeltsin did little to stop US’ capitalists hawks from looting the country. Indeed the then US president Bill Clinton pumped in billion of dollars to “rig the Russian presidential elections in 1996” : Don’t believe me, believe the Washington Post!;

(If you could, lay hand on the testimony of former Wall Street Journal reporter Anne Williamson who explained the full scale of the tragedy.)

Further, how friendly do you think is United States to Russia when it withdraws from the Intermediate Nuclear Forces (INF) Treaty?

Barack Obama installed MK-41 missile launchers in Romania and Poland which could fire medium-range Tomahawk cruise missiles: How friendly do you think is the move?

In 2018, the US announced it would not seek ratification of the Comprehensive Nuclear Test Ban Treaty; it even denounced the Non-Proliferation Treaty: How peaceful do you think that is?

NATO HAS MADE NO ATTEMPT TO CORNER RUSSIA

Let’s take this cruel lie head on: I have already mentioned how Clinton roped in Poland, Hungary and the Czech Republic in the NATO in 1990s;

(Unlike what Anastasia Pilliavsky claims in her piece, the Bush government tried very hard to include Ukraine in NATO but Germany and France were not game for it.)

So, NATO which began with 13 member states has now expanded to 29 nations and encircles Russia.

The alibi offered is that small Baltic and other Eastern European countries feel threatened by Russia: Imagine, a country which was fighting for its own existence in the 1990s, a threat to itself, was projected as a threat to small and weak European nations.

And if it was so, why Gorbachev’s proposed “Common European Home”—a security arrangement for all of Europe and Russia—was never heeded to?

So the US-led NATO has moved 1200 miles to the east of Elbe River to Russia’s very western border with the Baltic States. And do you think Russia is overreacting?

Well think about this way: the US has a similar Monroe Doctrine for protection of its border and neighbourhood. If the USSR, under the Warsaw Pact, had begun implementing a “maidan coup” against the neighbouring governments, how would have US reacted?

Russia borders more sovereign states—16—than any other country. It has maritime boundaries with Japan and the US, and two unrecognised states: Abkhazia and South Ossetia. Doesn’t it have a legitimate reason to worry on its security?

(The irony is, the Monroe Doctrine itself promises to stay out of European affairs if they stay out of US’ hemisphere in return.)

The truth is, by bombing Yugoslavia for 78 days, NATO signalled it had no intention to stop expanding.

It was no way to help the Russians who had caused the greatest bloodless revolution in history to end the Soviet regime.

Does Russia need more land? It’s a vast country will a small population. And it has no shortage of natural resources. The last thing Russia needs is more land;

Russia wants to relive USSR days? In today’s world when some of its own “Orthodox brothers” — Bulgaria, Romania etc—have turned against them?

This is an important part of Anastasia’s piece: Russia’s aggression against Moldova, Georgia and Ukraine.

Since Ukraine has been in news, let’s begin with it before taking up the issues with Georgia and Moldova.

Let’s look at Crimea. It had maintained a great deal of autonomy from the Kiev government anyway. After the 2014 coup, when the move to expel Russia from the naval base at Sevastopol began, Putin moved his men on the Peninsula: Not a single person was killed. A referendum was held which overwhelmingly sought a union with Russia: Unlike Kosovo whose residents have had no such opportunity!

The truth is, Russia won the Crimean peninsula from the Turks way back in the 1780s; it’s a part of Russia like New York is to US; hundreds of thousands of its soldiers died defending the Crimean city of Sevastopol from European forces during two sieges: one during the Crimean War, another during World War II.

In Georgia, the US-backed Rose Revolution of 2003 put Mikhail Saakashvili in charge. He attacked the breakaway province of South Ossetia, then enjoying full autonomy and protection by Russian peacekeepers. Russians first suffered casualties but then struck by destroying Georgians and securing South Ossetia’s independence: And yes, Russia has not annexed it.

The piece also points to Moldova and troubles in Transnistria. If Russia has created so much trouble in Moldova how come its people has chosen a president with affinity to Russia in recent times?

Call them brave or sacrificial lamb, the truth is Ukraine has been sacrificed in the proxy war between the United States and Russia.

Its president Vladimir Zelenskyy has sacrificed four its regions just to get close to the West: How bright is it?

We have umpteen evidences that thousands of foreign mercenary fighters are in Ukraine, like they were in the wars in the Middle East this millennium.

A volunteer spoke recently to the Canadian Broadcasting Corporation of fighting alongside “friends” who came “from the marines, from the States.’

INDIA’S NEUTRALITY IS THREAT TO DEMOCRACY

The truth is other way around: If India doesn’t take a stand now, it would never be able to do again: For Modi’s mission of “Atmanirbhar Bharat” would sooner or later fall into crosshair of the Hegemon. It is tolerating India only as long as its needed against China. If it had any regard for India’s sensitivity, Afghanistan would’ve been handled a lot better.

For all that could be said against Beijing, how many countries it has invaded in the last 30 years? NONE. A period in which US has constantly been at war:

It still has boots in Syria.

What exactly is Anastasia’s idea of democracy: Is it over 800 military bases encircling the globe who are anything but a threat to it?

Which are the countries the Hegemon has promoted with democracy in last 70 years? On the contrary, how does she think the democracy of Iran, Congo, Chile, Algeria, Palestine, Middle East etc has been mutilated by it? Is supporting military regimes and brutal dictators her idea of promoting democracy?

Clearly, the paid academicians would now look to whip up support amongst Indian citizens through propaganda for India to give up on Russia. Anastasia says as much in her piece: “I ask my Indian friends—academicians, journalists, lawyers, philosophers, schoolteachers and politicians—to condemn Putin’s terror.”

More than ever, India’s neutral, law-based, peace-calling policy would come under stress. It would now be India’s citizens who would be whipped up to go against their government’s principled stand.

There has never been a bigger need to stay alert.