Why Express wrong to defend Amnesty 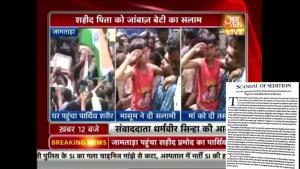 Indian Express came out in defence of Amnesty International today and launched a scathing attack against the antiquated sedition law and the action initiated by the Karnataka government.

The matter in question is  a recent gathering in Bengaluru held under Amnesty International “India’s Broken Families Campaign.” A few sufferers from Kashmir and their families were paraded before the audience and emotions were incited to the extent against the army and its “atrocities” that a section of gathering cited slogans of “Azaadi”—ostensibly freedom from India. Consequently, the charges and a sedition case were slapped on them by the state government.

Indian Express in its editorial has called it a “harassment” of Amnesty International, since the “azaadi” slogans were raised by a few individuals; It says, and I quote: “There is no reason to panic if a few students or activists raise anti-India slogans… It shows that the state is becoming intolerant and insecure…(and to) suppress inconvenient speech.”

A few questions to Indian Express on our readers’ behalf:

(a)If Amnesty India had no role why did it issue a press statement saying it was “neutral” on the matter of “any position in favour of or against demands for self-determination.” That they consider the “right to peacefully advocate political solutions.” Why Indian constitution, even Jammu and Kashmir constitution,clearly states that its an integral part of India. Shouldn’t those who call for secession and those who give it a platform—without even condemning it—deserve to have a sedition case slapped against them?

(b)Doesn’t Indian Express know that this same Amnesty International stated in the Charlie Hebdo case that the “freedom of speech” has to have a limit?

(c)Doesn’t Indian Express know that this same Amnesty International didn’t raise a word when the WMD bogey was deceitfully raised by United States to attack Iraq in 2003? That millions suffered and would suffer for a few generations in future.

(d)Doesn’t Indian Express know that US State Department and Amnesty International are often found in sync in orchestrating an issue which embarrasses another country? That so many cases of human rights violations by the United States hardly elicit a reaction from Amnesty International?

Okay, you want the matter to be closer to home? Then Indian Express please explain:

(b)While portraying Indian army as a monstrous presence in the valley, would Indian Express like to highlight the nation’s gratitude to our soldiers’ heroic work, putting their lives on line, in saving the Kashmiris during the terrible 2014 floods? Does it question Rahul Gandhis, Mayawatis and Mulayams for their indifference to martyrdoms of our soldiers, at the same time falling over each other over the “flogging” of Una?

(c)Doesn’t Indian Express feel odd when a seven-year-old daughter makes a poignant parting salute to her dead father, the commandant killed in Jammu and Kashmir, yet the powerful image never makes it to its news pages. Does the blood of our soldiers is one of enemies in their eyes?

(d)Indian Express says: “There is no reason to panic (on “Azaadi” slogans). it shows that the state is becoming intolerant and insecure.” Instead, it should have lauded the Indian state for its alertness. Indian state today knows how such secessionist forces are nurtured by Lutyens Media and foreign NGOs/Think Tanks. Indian state is prompt, not intolerant, and that’s how an elected government ought to react when it comes to dealing with secessionist forces.

Amnesty International, by its conduct and subsequent statement, has shown itself contemptuous to India’s sovereignty. Amnesty International can’t be a host and mute to “azaadi” slogans against Indian state and hope the laws of the land won’t swing into action.

Not everyone is as lucky and privileged as Indian Express, you see.