Finding the villain in this centrepiece of tragedy: If not now, then it’s never! 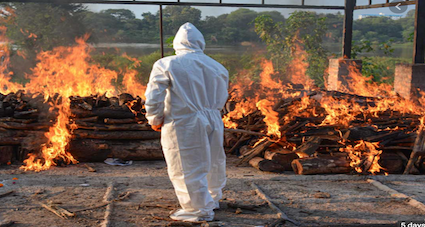 We all are looking for our villains in this crisis. At least one call every day tells of some grim news.

One of my ex-colleague in Lucknow couldn’t get a bed and she is no more; another colleague in Noida did but compares it to a butcher’s den, as if aprons have been put on mentally challenged; a friend tells of RT-PCR Tests no longer feasible in comforts of home.

The healthcare system, greeted with pans and pots in initial days of this pandemic, is much reviled today. My hometown Lucknow brings the news that oxygen cylinders are Rs 40,000 these days; a two-hour ambulance for sister-city Kanpur would lighten you of Rs 35,000. A lakh for a course of Remdesivir injections.

God forbids if one of your own loses the battle for life: What if the body goes to mortuary and a day or two is lost in formalities? Palms suitably greased but now there is this hearse van which is costlier than a limousine for a distance of a kilometre. You of course are at liberty to say no, say these vultures in cloaks of compassion. What chance a wounded sparrow has of escaping their blood-vetted beaks?

My words would echo with most of you: We Are On Our Own. Such fatalism has always been a bounty for those in the business of harvesting our lives. They are Alpha Vultures, not the ones you sight in hospitals or crematoriums. Not one or ten, they have millions of prey in mind. They break open your mind, locate the fear in your heart; ratchet up the valve of anger till your lips move and say: This One Is Our Villain.

They tell us who to blame if pandemic has spread; vaccines are short and oxygen or ventilators are missing. Little guessing these are politicians across the divide. Centre would tell us health is a State subject; a State would inform that oxygens and ventilators rest with the Big Guy. The frisbee on Vaccines is for political points. You would be an idiot to think it’s for your life. Both have Masters in manipulating us. Any gain in these dire moments is a three-pointer to them.

The vultures of these kinds are politicians. They tell us we took it lightly, we dropped the guard too soon. We didn’t remember SoPs of mask, sanitizers and distancing. How many ads did they take out warning us of the Second Wave? They knew it was coming, as it had in UK and US etc. They knew mutants in faraway lands would soon be in our living rooms. How much they spent on its publicity? Were we told of ramped up health infra, extra supply of Oxygen and Ventilators? That is if they did anything at all.

As long as full-page ads on some project launch, some anniversaries by chief ministers were paid in advance, media didn’t mind propping a Tejaswi Yadav as the brightest Bihari in a generation and how a Thackeray has put a Governor in its place. Take a look at Times of India’s covering page today. You’d know.

I live in Delhi which India looks up for its solutions. How does its medical infrastructure look to you beyond the boastful quarter-page with its health minister Satyendra Jain? What do you think is the image across? Even to think of rest of India is a horror.

Ah, Media. One whose sense of virtue is that of a Naked Emperor. Another Alpha Vulture. If they had put in a minuscule of resources they spent on a TRP scam, we could’ve been told of failing resources. We are grateful for their sustained pressure on Kumbh Mela and Bengal rallies. But they missed likewise with tens of thousands of protesting farmers at Delhi’s doorstep. As they would now when thousands are “Dilli Chalo” once again. They would rather have some wannabe TV star take a page to share her break-up with her beau than spare the space for some home remedy of our Nanis and Dadis. But what chance we ordinary have against the cheque which her publicist has paid for in advance?

Oxygen, like some SCI-FI, is being stolen these days. Delhi High Court today has laid the blame squarely at Centre’s feet: “Stop or seize from steel or petrochemical manufacturers, oxygen guzzlers that they are, if need be.” Another moral pomposity. I don’t know if someone has told the Honourables that demand-supply dictates where oxygen plants are located: Thus we have abundance of such plants in Maharashtra and Gujarat, or in Andhra Pradesh, Jharkhand and Odisha. Some like Madhya Pradesh have none and depends on its neighbours. That 70% of our all oxygen production today is for health infrastructure. The problem is of moving it around in time.

But lives can’t wait for days. Tragedies are piling. The smoke coming out of electrical crematoriums is dense and long. You might be dead but queue dictates you remain a spectacle for a few extra hours.

The truth is, the system has failed us. It’s no excuse to say Covid-19 is a Black Swan event. That you can’t prepare for it enough. You could, given how the world was alerting you of pitfalls ahead. But when elections are a priority over lives; and when its conscience-keeper, the Media, is busy imitating a prostitute, offering a heavy discount for a regular client, what hopes you and I have? And which of the four pillars of democracy do you think we should celebrate at this dire hour?

If India matters, if lives matter, not your Quran or my Ramayana, be each other’s strength. Make these Alpha Vultures pay for their sins. An alternative would emerge from our disdain; not if you beam at a PhotoOp with them.