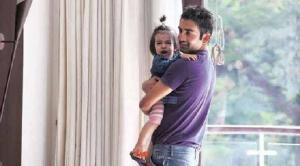 For a cricket fan Gautam Gambhir is defined through various lenses. He is a big match player having delivered in high-pressure World Cup finals not once but twice and with one of them being against Pakistan. He is also your abrasive West Delhi young man who is up for a combat when the other side could be merely inquiring time! Behind that face lives a man who is emotional, sensitive but is blessed with a vision. Some of these attributes which tilt towards emotions have been bred in Gambhir ever since he was blessed with a daughter in 2014.

The former India opening batsman shares that he can’t say no to his daughter Aazeen. He often tells his close friends that every since Aazeen came to his life he has been pretty emotional towards the girl child. Gambhir was already enraged with the news of 25 CRPF jawans massacred in Chattisgarh by Maoists on Monday. The following day when he saw pictures of grieving daughters of the two martyrs he was distraught. This was the trigger moment for Gambhir. He immediately decided that he will do something for the families of the martyrs and also get his team, Kolkata KnightRiders to play in Indian Premier League (IPL) with black armbands to show solidarity. He has decided to bear the expenses of studies of all the children of martyred men.

Those who know the KKR captain closely reveal that he will not stop here and will set up a wing in Gautam Gambhir Foundation where in there could be more welfare schemes floated for defence personnel. Another idea that Gambhir has never made public is that he wants to have a school of his own. He has a novel idea which is to have a daily period where a representative of defence forces will share his experiences with young Indians. Gambhir feels that the flame of patriotism needs to be kept alive and the only way we can do it is by regular interactions with defence officers. He is looking for a land around Delhi NCR and hopefully he will be able to crack it soon.

This is not the first time that Gambhir has extended support to someone in choppy waters. A while back he also supported Asian Gold medallist boxer Dingko Singh who is battling with cancer. A couple of years ago he financially supported Indian Ice Hockey team which didn’t have enough funds to travel for an outing abroad.