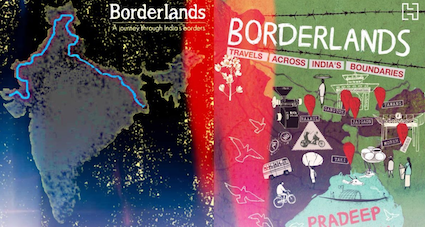 The concept of land border towns as dusty, desolate outposts has long been glorified in literature and movies. Sea-facing ports, on the other hand, have been melting pots for civilisations going back aeons. The advent and growth of air travel, now the favoured international travel option, has made airports the new funnels. Inter-modal movements rapidly take people and commerce along pre-defined paths, into and out of their comfort zones, without much interaction with the real new worlds that borders used to provide.

This book takes you to the land and sea borders of India, which millions of “ordinary people” use. Pradeep Damodaran in Borderlands takes great care to almost totally avoid air travel. This book, in a way, also tells you how simple it is to “go abroad” without a passport or visa. By land or across water. As an army brat who turned seafarer, this is something which one learnt by exposure. And this aspect of paperless human beings continuously migrating in search of whatever it is that drives them, is also brought out well.

But then, this book is way beyond the payscale of a travel book, in as much as it also becomes a very readable sociological experiment on why land and sea border outposts in India are what they are. Detailed chapters on defined land borders with Pakistan, China, Tibet, Bhutan, Nepal, Myanmar and Bangladesh are supplemented with observations on the undefined sea borders with Sri Lanka and other countries along the Indian Ocean. (Technically, if one drops a straight line of longitude from India, then even the continent of Antarctica deserves mention. And new information on how the aborigines of Australia trace their ancestry back to India confirms that the antipodes are, literally, in the same boat of borders, too.)

The book is made up of bite sized chapters, to be consumed in any order by the attention-deficit reader. Some chapters stand out because they have seldom been done before—India’s borders with China in Arunachal, for example, and the effect that the 1962 incursion had on the people there. One line says so much—aspects of which I had heard from Brigadier Dalvi’s men in 1962—“By this time, the Chinese soldiers had left. Khandu and his fellow villagers found their homes and property intact, with no traces of damage or desecration”.

The other chapter that does it for me is the one on Moreh, a town on the border between Manipur and Myanmar. After the 1962 churn in that country, Indians of different communities were forced out but some returned to the border to resume life and trade. The Moreh chapter includes interaction with people who originate from Nepal, Tamil Nadu, Punjab, Pakistan, Bihar, Bengal, and also the locals—not counting soldiers from all over.

Pakistan and Bangladesh get a lion’s share of the dialogue in our lives. They are well covered in this book. If maritime matters interest you, then the chapters on Campbell Bay (Andamans) and Minicoy (Lakshwadweep) are essential reading. I have passed through these islands dozens of times, but never visited these places.

I found the book difficult to put down, and have a gut feeling that for a certain kind of traveller, this may become a cult reference manual. Go to phoren near India. Don’t take your passport; take photos and return. With memories.