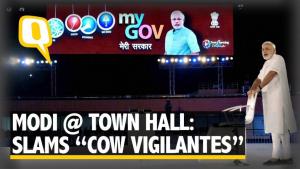 The first thing that comes to your mind is that it’s so disproportionate.

The massive Dalit uprising on Una flogging in Gujarat is way out of size. Mayawati, Rahul Gandhi and others making a beeline is so fiendish given how dalits have suffered under the regimes of Bahujan Samaj Party (BSP) and Congress all these years.

Similarly, Prime Minister Narendra Modi coming out in open, for two days in succession against cow vigilantes, offering himself to be shot rather than be those unfortunate ones in the name of cow protection, was so grossly unnecessary. Sure, Dalits are as important to BJP as they are to BSP or Congress in view of the assembly elections in Uttar Pradesh and Punjab next year. But a sense of proportion is the first sign of a mature democracy.

On the face of it, people who commit crime should be punished. It ought to be a matter of law and order. A criminal act committed “for” and “against” is a matter between “for” and “against.” You and I might have our opinions but every Hindu isn’t looking for a cow-killer as every Dalit isn’t killing cow in his shed.

That there are Muslims trying to save cows is glossed over. That not all cow-vigilantes are Hindus is brushed aside. I ask you: where’s cow-protection or cow-slaughter in your day-to-day life in terms of priority? I dare say nowhere in your top 100. If it was, cows won’t be having plastics on the streets.

Who are these media? A Google  search on “dalit and cow vigilantes” showed up the usual culprits: Indian Express, Newsweek, Washington Post,   Independent, Guardian, Huffington Post and New York Times  Or NDTV and ABP in video search. Try it for yourself !!! It does mark them as “activist” media. Hand-in-gloves. Don’t give me the shit that it’s human lives which bothers them. All they want is a divided, polarized and thus a WEAK INDIA.  This Lutyens Media is setting the agenda to bring India on to its knees.

Prime Minister Narendra Modi made a stunning remark the other day. “Some people want me to answer everything,” adding that it frees up those officials who are required to act on the matter. He also wanted himself to be shot than those who are being hounded in the name of cow-protection. A la Mahatama Gandhi. As far as I know, there are no Op-Eds being written on PM’s bleeding heart. Instead, all we find are three-column stories on how “fake” these sentiments are. There is no benefit of doubts given to our legally elected Prime Minister who continues to enjoy massive support of 74% in the country.

The Prime Minister’s reaction is extraordinary. As is the response in support by the parent body of BJP, the Rashtriya Swayamsevak Sangh (RSS). They have decided to dare anyone who is doing crime in the name of cow-protection. They are willing to alienate their own source of strength. They are willing to take on their conventional base of supporters. They are willing to be seen as deviating from the so-called Hindutva agenda. And all this, if you believe this partisan media, only in the name of securing Dalit votes in assembly elections next year. As if BJP and RSS haven’t heard of the logic: “A bird in hand is better than two in the bush.”

Yes, Modi’s past track record has the infamous 2002 Gujarat riots. But in 14 years of his rule in Gujarat, that was the only communal riot. He continues to speak the language of “sabka saath, sabka vikas.” If the man continues on his journey, the economic and political outreach aside, his social engagement would be the biggest legacy of his tenure. He would have elevated the narrow Hindutva agenda to include all Indians and that’s never happened in India ever, neither under British nor under despicable Congress rule. His radical social policies have far more substance than the impotent rhetoric of Congress or Left. It’s on par with latrines for girls, toilets and the Swachh Bharat Abhiyan.

Modi hasn’t deviated from his developmental stance. He, more than any other political leader in India, understands the new aspirational India. He won the 2014 elections on development agenda and he isn’t going to deviate from his goal. His is the most corruption-free government ever in India. Period. And the reforms his government has introduced, including GST, are unmatched by any other.

Not yet half-way through his five-year mandate, Modi has so far been statesman-like. He hasn’t indulged in below-the-belt hits of a Rahul Gandhi or Arvind Kejriwal. Nor has he fallen to the bait of Lutyens Media which has long been under control of Congress-Left, if not funded by imperialistic West and their ThinkTanks or NGOs.

Now what is left for us to do? I suggest vigilantism. Let’s keep India First as our guiding principle without falling into the polarization trap. India has many ills and drawbacks but the solution lies in reaching out, rather than taking a hardened, divisive stance. Put a hand on your heart and tell me if you don’t have a good Hindu or Muslim friend. Let media ignore what good Muslims do for Hindus  or the latter for Dalits and vice-versa. Let’s build on warmth which you and I have for people of other community. Don’t let our treasonous media poison our hearts.

And certainly not about our elected Prime Minister. Let him complete his term. Let the voters judge his performance. He would be in or out as the masses perceive. That’s democracy anyway. But let’s not make it a poisoned chalice for him. Let’s not work overtime to bring him down. Let not our biases and prejudices come in the way of a glorious India of tomorrow.

As for media, see through the fine print. Every morning, even if the bias sickens you. Don’t fall for the headlines which quote foreign media. That foreign media and their powers, as well as our Lutyens Media, will not tolerate a STRONG INDIA. Never. They would dread the day when India is not polarized. And let’s vow that we won’t be. Neither now nor ever.