Hamid Ansari: Why ex-RAW officers wanted him probed for his conduct in Tehran? 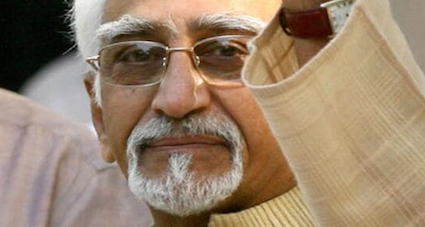 (Hamid Ansari was vice-president of India for 10 long years, between 2007-2017. He has caught eye with his rant, mostly recently for speaking from a platform which was managed by a group with links to Islamic terrorists’ outfits. Even in the past, Ansari was claimed to be involved in “anti-national” activities by none other than R & AW (Research and Analysis Wing) officers. A report on it was published in Sunday Guardian in 2019. We reproduce the piece here with gratitude.)

Former Research and Analysis Wing (R&AW) officers had sought an inquiry against former Indian Vice President Hamid Ansari for what they have called “damaging R&AW operations” while he was posted as Ambassador in Tehran, Iran. They now hope that Prime Minister Narendra Modi will get into the truth of the entire matter. These officers, who were posted in Tehran during Ansari’s tenure, had first approached the PM in August 2017. Ansari was posted in Tehran from 1990-1992.

In their complaint to the Prime Minister, these officers have claimed that Ansari, while being posted in Tehran, “not only failed to protect India’s national interest, but cooperated with the Iranian government and its intelligence agency SAVAK to cause serious dent to R&AW and its operations. According to them, there were four major incidents when Indian Embassy officials, diplomats were kidnapped by SAVAK and Ansari deliberately failed in his duties to protect India’s interest.

One of the officers, N.K. Sood, who retired from the agency in 2010, told The Sunday Guardian that Ansari even went to the extent of recommending the closing down of R&AW stations in Iran.

SAVAK, was officially disbanded in 1979 and a new organisation, Sazman-e Ettela’at va Amniat-e Melli-e Iran, was formed. However, intelligence agencies, including R&AW, even till date, continue to refer to the Iranian spy agency by its old name SAVAK, as the new organisation is/was not properly known.

Sood listed multiple instances which showed that Ansari, during his tenure in Tehran, did not fulfill his duty as was expected from him.

In May 1991, one Indian official, Sandeep Kapoor, was kidnapped from the Tehran airport, ostensibly by SAVAK. When the issue was brought before Ansari, he played it down despite the R&AW station chief—who was in Dubai when the incident took place, but flew back considering the emergency situation—briefing him personally on the matter. “Ansari did not take any steps to trace Kapoor, but sent a confidential report to the MEA that Kapoor was missing and that his activities were suspected in Iran as he was said to be involved with some local woman. He deliberately failed to mention that R&AW had reported about involvement of SAVAK in this case,” Sood said.

Three days later, an anonymous phone call to the Indian Embassy informed the receiver that Kapoor is lying at a particular place on the road side. He was drugged, the effects of which lasted for several years. Despite R&AW’s advise to report and lodge a protest with the Iranian foreign office, Ansari did not take any action.

In August 1991, R&AW was keeping eyes on Kashmiri youths who were regularly visiting Qom, a religious center of Iran, and were taking arms training. Despite the old R&AW staff advising him not to do so, the new station chief of R&AW told Ansari about his operation. “Ansari gave the name of the officer who was handling this operation, D.B. Mathur, to the Iranian Foreign office, who passed it to SAVAK, and Mathur was picked up by them on a morning while coming to the Indian embassy. By the evening, it was clear that he has been picked up by SAVAK,” Sood recalled.

This incident has also been mentioned in the letter that has been shared with Prime Minister Modi. When Ansari refused to take any concrete action, apart from registering a missing report about Mathur with the Iranian Foreign office and sharing it with Delhi without mentioning that he was likely to be picked by SAVAK, the R&AW officers, on the second day, through a scene out of a spy movie, managed to inform Atal Bihari Vajpayee in Delhi, who then told this to P.V. Narasimha Rao, the then Prime Minister, which led to the release of Mathur from Evin prison, where he was kept, on the fourth day of his kidnapping, but he was given 72 hours to leave the country. Once inside the Indian Embassy, Mathur disclosed what had happened to him and how the SAVAK was already aware of the identity of Sood and the station chief, which the letter says can be attributed to Ansari sharing it with the Iranian Foreign Office.

These officers believe and are extremely hopeful that PM Modi will order a thorough probe into this issue, which damaged India’s strategic capabilities deeply.

Sood also recalled about an incident involving Mohammad Umar, a security guard posted at the residence of the Indian Ambassador, who was picked by the SAVAK and released after three hours. When Ansari was informed about it, he asked the R&AW station chief to ascertain the facts as he believed that he was “turned” by SAVAK. However, despite the R&AW clearly stating that he was innocent, he was sent back to India with Ansari recommending that he should be barred from foreign postings.

Perhaps the most glaring humiliation that the R&AW suffered in those times, as has been mentioned in the letter, is the beating up of P.K. Venugopal, the R&AW station chief by SAVAK, before being let off. The station chief was picked up while he was on a sightseeing tour with an Iranian woman. Ansari never lodged a complaint with the Iranian authorities. Later, Ansari recommended his recall from Iran and he was later dismissed from service. However, this is where things became interesting. She wanted an Indian visa to meet Venugopal, which was resisted by R&AW; however, Ansari went ahead and gave her the visa.

The letter also mentions how a First Secretary, who was posted in Iran for 10 years, was charging US$500 from people who claimed to be students and gave them Indian visa. An inquiry done by R&AW revealed that the recommendation letters allegedly issued by the Indian universities on the basis of which the Iranian nationals were being given visa, did not exist. Despite R&AW putting this in writing in front of Ansari, nothing happened and the matter was forgotten.

The letter mentions about Ansari’s regular and long meetings with Pakistan Ambassador in Tehran, which were not reported to the MEA.

It further goes on to talk about how R&AW’s operations, which were defensive in nature, were kept on hold because of Ansari’s order. “Ansari also brought other Indian Ambassadors in Dubai, Bahrain, Saudi Arabia to target R&AW units in their respective missions. At the time of the Bombay blasts, the R&AW’s capabilities vis-a-vis Gulf countries were in total disarray,” the letter reads.

Sood told The Sunday Guardian that when Ansari was transferred from Iran in mid-1993, there were celebrations in the Indian Embassy.

Sood has asked for a detailed inquiry into why Ansari failed to take proper and appropriate actions when staff members in Tehran were being kidnapped, the role of Ansari in the fake visa being given to Iranian students and the role played by Ansari in damaging R&AW’s operations in Tehran and other Gulf countries.