‘Haramkhor’ Sanjay Raut: Here’s listing all those who fit the description 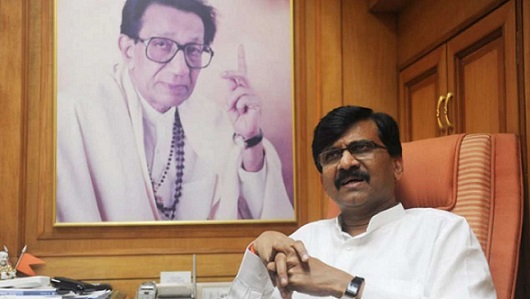 Sanjay Raut. Wait, wait. This isn’t a voice which you are hearing from behind Kangana Ranaut’s skirt. This man can fill up your nostrils all on his own. He is always in your face like the ones who knock at your car panels on red lights. Ranaut is only the latest excuse.

Raut is a leashed presence at the feet, a prototype all leaders keep only to be released in time. Some act suave, like Pavan Varma and Derek O’ Brien and some are cast in his inimitable mould such as Azam Khan and Sanjay Singh, if you may. Congress has too many which this piece is too short to do justice to. So, Randeep Surjewalas and Navjot Sidhus and Digvijay Singhs could relax.

There was a time when Sanjay Raut wanted to bar Muslims from voting in elections. He came around to stand with them on anti-CAA plank, chumming up to Jamaat-e-Islamic Hind. This change was overnight. It swung with equations of his Shiv Sena vis-à-vis BJP. He once bloated on the upcoming Chhatrapati Shivaji memorial site on the Arabian Sea. He is now drawing daggers at Rani Lakshmi Bai, i.e Kangana Ranaut in a filmi avatar.

So who is the real Sanjay Raut? Nobody. He is just a muckracker in the journalistic tradition of our times. He edits his party’s paper, Saamana, and takes credit for writing a biopic on Balasaheb and would be mistaken as erudite by somebody living in North Pole. Well, after all he has been an “elder” in Rajya Sabha for three terms now. But his calling card, as you would’ve guessed by now, is baring his teeth when his masters want him to.

So, it’s with him now on Kangana Ranaut. It was good he affixed “ladki” with his “haramkhor” adjective. Or somebody would’ve thought he was in a self-appraisal mode. I mean thrice a national award winner, four times of Filmfare, all by the age of 30, doesn’t quite fit the definition of a “haramkhor.”

As you would’ve guessed, the gender-warriors in our newspapers have ducked into their gutters. All your Shobhaa Dees, Mahua Moitras, Priyanka Gandhis, Brinda Karats who bristle at slights on the fairer sex are silent. And we are talking of no ordinary woman here. It’s a prized actress who is picking up the cudgels against the patriarchal Bollywood. Who wants to clean up the filmi stable of drugs and Dubai mafia. Who wants to offer a tomorrow of safety and respect and dignity to a newcomer who is arriving at VT station from Asansol. Who doesn’t want them to meet the fate of a Sushant Singh Rajput. That their young eyes with dreams aren’t closed forever.  A woman who is risking her life, lighting a matchstick on her own career, who if she was to venture into Mumbai today would have an idea how a PoK must feel like.

But not a word from our pen-pushers. Not a clap for the triumph of talent over entitlement. She is not a “Shero” to Barkha Dutt.  Nor she is a Safoora Zargar who gets a cry of outrage from Shekhar Gupta’s ThePrint. A Sagarika Ghose brings out international law in defence of Safoora. A Rajdeep Sardesai tears his heart out on a pregnant woman in jail. Somebody calls Ishrat Jahan a daughter of our own land. Never mind one is charged with inciting riots and the other with a plot to assassinate a chief minister.

Our Bollywood bimbos now can’t find the placard in support of their gender. Against one of their own who they can’t match in range in this lifetime. Why bother if there are couches perfumed for their hinterland preys, ringed by leering louts? That youngsters are no better than playthings for those who happen to be their dads?

All of them—these starlets, muckraking journalists, political clowns—are toxics in our life. They don’t allow us to smell a rose; inhale a breeze, whistle a tune. Once in a while, somebody stands up risking everything one has. And she is “haramkhor” to them.