Hey Joe Root, you haven’t still figured out what is knocking England out cold 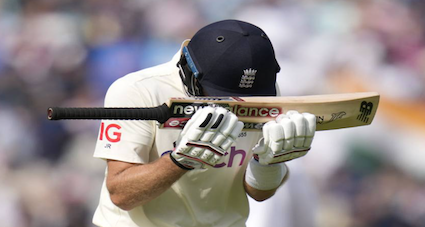 This Indian team is not big in appearance, or hulk, but they get their victims much like little tsetse fly do, beginning with headaches to itchiness to fever and joint pain before the brain is seized and you are sent to mortuary. Till the last minute, that is, you feel you could brave it out.

England were nothing for 100 and all done for 210 in a game which looked for taking at 127 for 7 on the first morning. Such defeats fuzz mind. You have sorted out KL Rahul, India’s middle order is gathering stink, they continue to be a batsman short and a bowler dropped who could charge a premium on any invite for any World XI.

Analysis don’t help. You look out for a Rohit Sharma and Jasprit Bumrah and are respectful to the supporting cast; their little bites like one of tsetse fly which you could carry to the evening’s blind date, a testimony of your charm. You can’t really foresee how these little bites would be fatal. You are almost indulgent to a smoking cover drive by Thakur, an ungainly top-edge of a pull, a thick edge over the slips but they don’t stop, they keep coming, and slowly a small itch has turned sore to red to purplish blue by which stage a crowd has gathered for a death foretold.

The thing is, the victim is none the wiser for a recurrence. It’s not one-off, it’s been staged every day this series, when a chorus takes over from the lead singer, a cub who brings home the prey. The closest akin is a chess game where king and queen, rook and bishop hold the most attention but it’s the pawn which has squeezed you out of the board.

Remember Shami and Bumrah with a wooden stick at Lord’s? Thakur in Oval and Oval again? KL Rahul who was offered a screen test only after Opener 1 and 2 had fluffed lines and who could still have found himself in wilderness if Prithvi Shaw had turned up in time?

Thus it would do no good to England to see India’s bowlers alone as the vikings who invite themselves for plunder every season. After all England have made a 300 or kept India in field for 100 overs at least once in every Test so far. India’s red cherry hunters have still not matched the feat of their own of a 78 all out or a 122 for 7 as it were. It’s the critical moment, that undefinable awareness of the game, which India has seized and England has squandered. Think of Bumrah’s spell on a flat Oval which is being acknowledged as the best this summer. That late stand at Lord’s on the final day when England had pondered a win or a draw and never a defeat.   The revival of Pujara and Rahane in the same game. Cancel them out and England is 3-0 in the series.

The pity for England is, it could never come out of Joe Root’s shadow. He is the guardian, the Hercules, the Abbot of the monastery, nailed to the Cross for the sins of his own men. The virus is beginning to get him or when did we last see him offer the gap in his defence or drag a harmless on to his stumps? England could either mourn its batsmen or injured bowlers or hunt for those men in the circuit who separately amount to little but together are an ensemble. There is a lot to learn from India, who didn’t crib a horrible schedule or the travails of a touring team in the times of pandemic. There is a lot to hang these Indians out on a square for the infidelity of their batting but the rope invariably hasn’t fitted the necks.

If England do so, and be humble in receiving the lessons, Old Trafford could be salvaged. It won’t be otherwise if requiems are read on missing bowlers and diffident batters. India’s tsetse flies would bite, it’s for England to keep it to minimum. And better still find their own.

We would know the answer in a week’s time.