How Lutyens’ Media shielded Rahul Gandhi on his lies 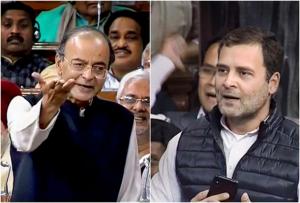 You must have read in English mainstream media on Thursday morning that Finance Minister Arun Jaitley in Parliament called out Congress President Rahul Gandhi for “speaking five lies in a day.” But I bet you wouldn’t have read the instances Jaitley cited in support. Be it your Indian Express, Hindustan Times, The Hindu or The Times of India—all the Lutyens’ Media have edited out the “instances”.

It’s not the first time—the Lutyens’ Media never nails down Rahul Gandhi on his lies. Mr Gandhi knows he can lie with impunity and the English MSM would gush and swoon. There was never a word against his mother Sonia Gandhi for over two decades. NOT ONE WORD. There is none against Rahul Gandhi in the last five years. You can watch this video of Jaitley’s speech of Wednesday and judge for yourself how your newspaper cheats you every single day. And firewalls Rahul Gandhi as if it’s lives depended on it.

Maybe it does depend after all.

I bet you haven’t read what Jaitley said about Rahul Gandhi’s lies on offset partners and the supposed favour to Anil Ambani’s Reliance. “They keep citing Rs. 1.30 lakh crores (the amount of favour). Now it was UPA which decided in 2005 that offset partners in India must get 30-50 percent of total work. Since the total deal is Rs 58,000 crores, it would amount to Rs. 29,000 crores. Dassault has said the business (to Reliance) comes to only 3-4 percent, or only around Rs 800 crores over 10 years. How the figure of Rs 1.30 lakh is cited when the entire deal is only Rs 58,000 crores?” Did you find it in your newspaper?

Jaitley then tore into Rahul Gandhi for somehow linking PM Modi to Rafale deal. “(He said) The procedure was wrong. No negotiating committee, no defence acquisition council, no cabinet committee on security—just one man (Mr Modi). But the panels (put together) had 74 meetings…the details of which were submitted to the Supreme Court. SC said it was satisfied with the process.” Did you find it in your newspaper?

Jaitley then shed light on why Hindustan Aeronautics Limited (HAL) was not chosen as an offset partner. “UPA itself had refused the contract to HAL.” HAL quoted “2.7 higher man-hours”required for the job—so not only price would’ve escalated but Pakistan and China would’ve gone stronger too.” Did you find it in your newspaper?

“The press statement which was issued (after the deal) said it was an inter-governmental agreement. That it would be cheaper than the price which UPA had negotiated.” Did you find it in your newspaper?

Jaitley then chided Congress leader Shashi Tharoor over Rafale pricing and said at least the latter was expected to have read the Supreme Court judgment. “SC asked for price, we gave them the sealed envelope, they opened it and then SC gave the judgment that it was satisfied with the judicial review of the pricing.”

Jaitley mentioned that UPA contract provided for 11 years for the delivery of first batch of Rafale jets. “And they are asking us why no jet has been delivered in 2018 when the contract was signed in 2016.”

Jaitley dismissed the Joint Parliamentary Committee (JPC) probe outright. “JPC is on matters of policy” and not on “investigations.” Besides, Jaitley said the JPC is on “partisan party lines.” He cited the instance of Bofors where a hand-picked JPC had termed the bribes given not as “kickback” but as “winding up charges.”

Jaitley struck hard at lies which the Congress president and his party have spread over the years. “He (Rahul Gandhi) said the French president (Macron) had himself said (about Reliance as offset partner) to him. The French government later denied it.” He also cited the case of forging of papers by Congress to show (former PM) VP Singh’s son had a foreign bank account at St. Kitts. Yes readers, you must’ve missed this bit too.

Jaitley took a broadside against the Congress and its leaders. “The Economist” wrote about a “prime minster who is in office but not in power” on Manmohan Singh. “This man (Rahul Gandhi) lies repeatedly. He lies five times a day.”

So disgraceful were Congress during the Parliament session that speaker Sumitra Mahajan spat out in disgust: “If you don’t want to listen, you shouldn’t have asked for it.”

Yes, Rahul Gandhi had asked for it. But you wouldn’t have known thanks to the cover-up which English MSM does as a matter of editorial policy.