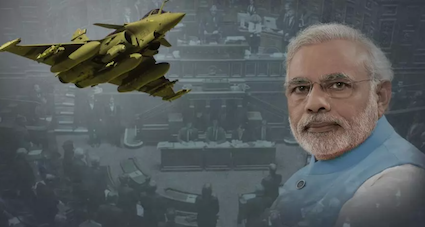 Rafale 2.0. Let’s look at the message and the messenger.

The message is a case of corruption filed in France in this deal between the two countries which Rahul Gandhi is citing as a proof of prime minister Narendra Modi’s corrupt government.

But then there is this little matter of burden of proof. A case in Court and a verdict on it are two different things.

Besides, I am confused that on one hand Congress says Rafale jets were massively over-priced and in the same breath claims if security was that big an issue why buy only 36 and not the entire fleet of 126 jets? Why would a corrupt Indian government not go for 126 jets if there was such massive pay-offs were to be made?

Let’s look at the messenger. It’s an NGO named “Sherpa” which is infamous for filing cases, mostly against developing countries in Africa where Opposition stuffs them with funds in return. Congress should be careful if a similar modus operandi is suspected on the present Rafale issue.

For instance William Bourdon, the founder of Sherpa, had a bogus lawsuit against the Mauritianian president Md Ould Abdel Aziz which was bankrolled by Aziz’s political opponents and his cousin Mohamed Ould Bouamatou. Both Bourden and Bouamatou, in due course, became board members of a firm called Foundation for Equal Opportunities in Africa. Sure enough, in 2015, “Sherpa” received funding of 483,191 Euro dollars from the Foundation. (See a long thread on it below).

William Bourdon is accused several times of filing bogus lawsuits just to attract media attention by only targeting notable personalities and firms that are vulnerable to reputational damage and are massively popular amongst media groups. #Rafaledeal https://t.co/ZgARqgPrpE

Bourdon has once also gone after Equatorial Guinea’s vice-president, Teodorin Obiang for “embezzlement of government funds.” He had once supported Muammar Gaddafi’s son. Bourdon’s action betray a man who seeks limelight and funds by raising noise in a major European capital and very little comes out of it in the end. Did I mention that he is a lawyer too with the Paris Bar Association?

This is not the first shot at Rafale by Bourdon and his Sherpa. Earlier, the Parquet National Financier PNF had turned down their request for a probe in the Rafale deal in 2018. The move was beaten again in June 2019.

Besides, what do we do with India’s Supreme Court and CAG which has honeycombed all the related papers and didn’t find any irregularity in the deal—neither on decision-making, nor pricing nor in selection of offset partner. Indeed, CAG’s report corroborated the Modi government’s stand that better pricing, maintenance terms and better delivery schedule had been achieved in the purchase.

Rahul Gandhi and opposition could again go to town and raise a storm but it’s a fool’s dream that Modi could be pinned down on corruption charges. India doesn’t feel he is corrupt. Gandhi could be creative once again on “Chowkidar Chor Hai” and walk that path again. It won’t yield political dividends. He should look around at fellow Opposition and realise why they are silent.