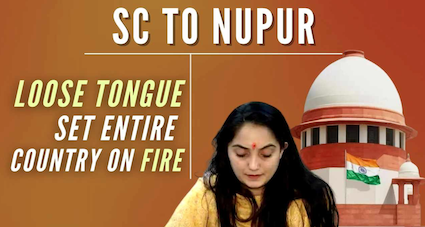 The observations by the Supreme Court judges (Surya Kant and JB Pardiwala) on “loose tongue” Nupur Sharma is still hanging heavy in the air.

The sanitized Indian media of course has used all its tools to stem the stench but  similar to a buried corpse in a house, the neighbourhood is agitated in a parallel universe.

Though the observations have not made it to the written order, netizens are wondering if it would not influence the judgement of 50 lower courts where Nupur Sharma could be asked to appear on the basis of FIRs which the Supreme Court refused to be clubbed and brought to one court in Delhi.

And if Supreme Court’s views won’t have a bearing on Nupur Sharma’s judicial fate, why would a TV debate influence the judgement of say Sabrimala, Ayodhya, Gyanvapi etc ?

And if it can’t, why stop a public discussion under the clamp of sub-judice?

The apex court could make remarks and it won’t impact lower courts. But those in media could.

So, Supreme Court opinion won’t matter. But opinions of media would matter.

And, if opinions don’t matter, how could Nupur Sharma, for her views, be accused as “responsible” for the unfortunate beheading in Udaipur?

Thus Nupur Sharma’s views have had the rolling horrific effect on society but the Supreme Court’s “personal” views on her won’t have a bearing on her trial.

As per the observations of the Judges in public domain, they are upset that nobody has “dared to touch” Nupur despite the FIRs against her.

What if Nupur is hauled to the Court and her defending lawyer offers a defence for her statement? She could rustle up remarks by the top Islamic clerics and possibly show the Book too in her defence.

In a way, the judges have also accused the law and order agencies of complicity.

If so, why not punish the Police? Give those oral observations in writing so that the Delhi Police could be hauled up in courts?

The two concerned judges are now being censored by one of their own fraternity.

Justice SN Dhingra, once with Delhi High Court and now retired, and one who has a reputation of jailing bureaucrat and ministers, is scathing on SC judges’ “observations” on Nupur.

“I don’t understand how the Supreme Court can make such oral observations.

“If the Supreme Court had guts, it would have given those comments as a part of the written order.

“…How is it righteous of you to consider her guilty without any trial of the case, to become a prosecutor yourself, to charge the accused on your own, and declare her guilty only to deliver your judgment orally?

“Supreme Court itself cannot hold anyone guilty without any investigation.”

“The (supreme) court asked why didn’t the petitioner go to the magistrate. There are countless incidents in which the Supreme Court has bypassed magistrates and high courts to listen to the petitions of rich people even at the stroke of midnight.”

Social Media is an unsparing space. We have this link posted on twitter where law minister Kiren Rijiju’s comments in the parliament in April are being tweeted and retweeted.

Rijiju said that since January 2017, in the last five years, the government has received 1631 complaints against judges related to judicial corruption.

“All these grievances have been forwarded to the Chief Justice of India (CJI) and the chief justices (CJs) of the respective high courts,” he added.

“In the last five years, only in one case (emphasis mine) the department of justice (of the law ministry), with the approval of the President, conveyed sanction for prosecution under the Prevention of Corruption Act to the CBI against a retired high court judge in 2021,” Rijiju said.

That accountability of higher judiciary is subject to “in-house mechanism”, as per Rijiju, even as India’s judiciary elects itself is fuelling some angry responses on the social media.

In the morning newspapers today, there is a detailed story of a lecture Chief Justice of India, NV Ramana, gave in the United States on Saturday where he said: “We are answerable to the Constitution and Constitution alone.”

That’s how J Sai Deepak, one of the better known lawyers in our India, has responded:

And if judges are “answerable” to Constitution alone, does that mean the Parliament has no right to impeach a judge? Or the Constitution, as its today, can’t be amended?

Constitution exists because the Parliament exists, as does judiciary and executive. Constitution is not a standalone object.

Or would we have a day when a party with complete majority in Parliament asks for a referendum and resets the button completely: A new Constitution as it were?