Inbound nephews and nieces of Joe Biden: A return to killing fields 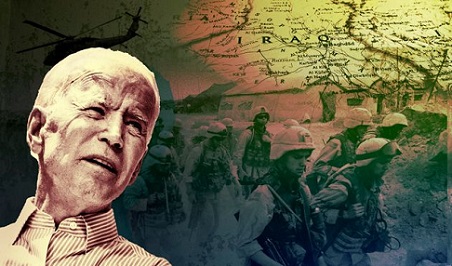 It’s as good a moment to laugh at or mourn for the Americans and verify this utterance four years down the line in 2024.

For men like me, it’s a moment of chuckle since the US media is having an orgasm on Good Old Joe and his team even though Georgia, Wisconscin, Arizona and Nevada and 79 critical electoral votes are being challenged.

But then the US media, in the presidential campaign, never raised the little matter of “war and peace” while pitching for Joe Biden and now wouldn’t like the Americans to peek at the dossier of his inbound nieces and nephews.

So, we have Tony Blinken as Secretary of the State who was disappointed that the United States didn’t apply enough force in Syria and advocated that Saudi Arabia be sided with in their bombings in Yemen. He had chortled along with Biden for military action in Libya. Those polite call him Biden’s “alter ego.” Those blunt prefer the phrase of “war-mongering psycho.”

Somehow, this essential on the man misses the US media completely as they harp on his experience, having been a deputy both in the offices of the National Security Advisor (2013-2015) and Secretary of State (2015-2017).

This once aspiring film producer couldn’t have found a better script than his own journey: Jewish parents, father who dominated the world of venture capital, mother a patron of arts, a stepfather who survived the holocaust and became one of the most influential lawyer on the global stage.

Blinken’s access in the ante-chambers of White House was visible as back as on May 1, 2011, peering behind Barack Obama and Hillary Clinton while the Operation Abbottabad against Osama bin Laden was on ( Blinken in red circle in image below).

Then you have Jake Sullivan, the National Security Advisor, who once wrote to her boss Hillary Clinton that “Al Qaeda is on our side” in Syria. He also was a key player in hyping up the fake allegations of Trump-Russia collusion. He too is all for “American exceptionalism” which is America-in-the-palm-of-military-industrial-complex-again in the post-Trump world.

Then there are nieces. Michele Flournoy who is most likely to be the Secretary of Defense. Janet Yellen, treasury secretary, who is an inflation hawk, unlikely to support large spending on social welfare, and generally means that the rigged US financial system, a private monetary system, is ruling the roost again.

If still unconvinced, they say, follow the money and truth would reveal itself to you.

The two most-common link between most of these nephews and nieces is CNAS (Centre for New American Security) and CSIS (Centre for Strategic and International Studies)—the 2nd and 6th highest recipient of US government and defense-contractor funding.

Who are the top donors to CNAS? Northrop, Grumman, Boeing, Lockheed Martin, Raytheon and the Department of Defense. Now Michele Flournoy is co-founder of CNAS. One of her well-documented sleight of hand was in getting the UAE to pay CNAS $250,000 to draft just a report that it must buy American drones. These pilotless birds, US-made, have never stopped ending up in Gulf theocracies, never mind their human rights record or brutal bombings in neighbourhood such as Yemen.

Tony Blinken has been with CSIS, Jake Sullivan with Macro Advisory Partners, run by British spy chiefs, not to say with Carnegie Endowment for International Peace, funded by 10 military agencies and defence contractors. Watch out for the names of Avril Haines (top contender for CIA director) and Kathleen Hicks (CSIS) in case their names pop up in your New York Times of Washington Post tomorrow morning.

There is this moral from Aesop’s fable: “A man is known by the company he keeps.” To me, it means the return of GIs boots in the far-flung corners of the world. The US media would never mention that this set cost the United States humiliating defeat in Iraq and Afghanistan, just as in Vietnam. Some three million service members spent time in Iraq and Afghanistan for no gain in the last 19 years. Some $6 trillion dollars of the taxpayers have gone down the drain. Some 515,000 people have been killed, including 260,000 civilians.

So the sacred cow of foreign policy and the golden calves of defence establishment would again be venerated. Those who found Donald Trump an evil incarnate in the last four years, a Hitler reborn, would sing peace hymns in the background to genocides. Meanwhile, you could carry on with your clowns in NYT and Washington Post.