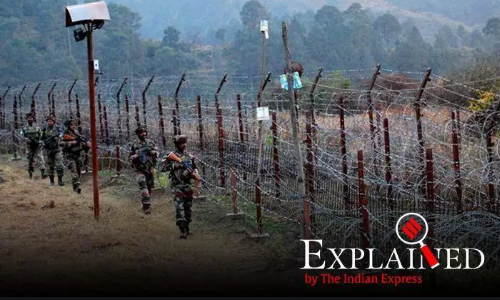 Indian Express is going to length to find voices which could question the Centre on its fiat on Jammu & Kashmir, notably on constitutional, human rights and its federal-character-under-assault grounds.

Conveniently kept out of view is terrorism, loss of tens of thousands of civilian/army lives and billions of tax-payers money which never reached the commoners of the troubled state.

The newspaper doesn’t have a stance on the exodus of Kashmiri Pandits, that minorities were discriminated against in the state, that caste reservations was out of bounds; and that 106 Central Laws (Prevention of Corruption Act, Land Acquisition Act, Right to Education Act, National Commission for Minorities Act etc) were rendered lifeless by those who governed the Centre and Srinagar.

Where are people in Indian Express’ discourse? Do we hear from them on Jammu and Ladakh which has bigger area and still bigger population than the Valley? Where are its investigating geniuses who hide from its readers that Kashmir Valley gets more financial allocation that what Jammu and Ladakh divisions, put together, are provided for? Why it escapes them that the per-capita subsidy to J & K is 16 times more than West Bengal and 12 times more than Bihar?

In its’ Sunday’s edition today (September 1, 2019), Indian Express has flushed out a Supreme Court lawyer Aman Hingorani who turned a doctoral research into a book (Unravelling the Kashmir Knot) and now has an entire page dedicated to his discourse to the crème da la crème of the Capital on the Constitutional heist which the Modi government has pulled off in J & K.  The newspaper takes Hingorani’s discourse on a page they pompously call “Explained”.  The man himself is preening to his audience that at the end of his discourse, they would realize the futility of Centre’s move. (You dumbs, here I am to get you rid of your ignorance).

I am not sure if it was an interactive session or Hingorani’s monologue. But since Express claims the session was meant to benefit its’ readers, I as one of its most long-lasting consumer, have a few questions for Hingorani and I hope they are not inconvenient enough to be ducked by both the newspaper and the “star” it has peddled today.

Question: Please avoid the misinformation that all other princely states had merged their territory into India. Junagadh and Hyderabad hadn’t.  They were intransigent compared to a prostrated Maharaja Hari Singh of J & K.  But while Junagadh and Hyderabad succumbed to India’s military pressure, J & K was allowed to dictate terms.

Now how did that happen? Was it because Junagadh and Hyderabad were managed by Sardar Patel while J & K was left to be Pt. Nehru’s toy? Your turn Mr Hingorani.

Question: Article 370 was the stepping stone on which Article 35 and 1954 Presidential Order were later added. It allowed J & K to have a separate constitution, a state flag and autonomy over the internal region of Kashmir.  It allowed the state government to discriminate against Hindu and Sikhs who migrated at Partition; against Valmikis of Punjab whom they lured with the promise of citizenship but never delivered.

Article 370 makes a mockery of Article 14 which guarantees equality before the law and the principles of liberty. As we know, not everyone living in J & K could vote in the election to the state assembly. Further, Article 15 prohibits discrimination on the basis of religion, caste, sex, place of birth or race etc.

So Mr Hingorani, could you please revisit your position in light of the facts obscured in your discourse?

HINGORANI: Many states have restrictions on people buying land, what’s so special about it (Article 370)?

Question:  Let me rephrase this question and see Mr Hingorani what’s your response: Which are other states where a woman, if she marries outside her state, is denied rights over land? Ok, here’s a dollop of escape route I let you have: Just name one state.

HINGORANI: India can’t go to United Nations and then say (Kashmir) is an internal issue…

Question: So Mr Hingorani, what did United Nations do when Pakistan not only occupied a part of Kashmir but also later ceded 20% of the entire area, Gilgit-Baltistan etc, to China? What right Pakistan has on the area of Kashmir it has illegally occupied? What rights Pakistan has of ceding Kashmir to China which has no claim over the territory? Did they take the route of people’s referendum? Was there any instrument of accession signed that you are so fond of quoting?  Hasn’t United Nations become irrelevant on Kashmir? If it hasn’t, then why didn’t United Nations make any noise after India’s move this month: That wait, this matter is under us, and India can’t decide on its own on J & K?

HINGORANI:  Presidential Rule is an emergency provision. It is not meant for taking far-reaching decisions…

Question:  And you think 70 years spent in the quagmire still doesn’t confer an emergency-status to J & K. If the application of President’s Rule now is a travesty of justice, what would you say to the Presidential Order of 1954? Does our constitution bind the President not to take such a decision? If it doesn’t, what’s your gripe?

HINGORANI:  Can you use emergency provisions to dismember and destroy the identity of a state?

Question:  You call it dismembering of state but not question the latter which had no time for Ladakh. You would call it destruction of identity of state but would make no mention that how come Kashmir Valley, with lesser population and lesser area, had 46 assembly seats to Jammu’s 37           in the state assembly. Isn’t it a stolen identity? Who did it? Didn’t it allow Muftis and Abdullahs perpetuity in power? Was it subversion or empowerment of democracy?

It’s important we interject when our newspapers peddle a one-sided warped discourse. It’s certainly not neutral or unbiased. It’s easy to hide behind the cloak that it’s a writer’s own personal view.  But when none of your editorials present any piece which speaks for Kashmiri Pandits, minorities, deprivation of central laws or the welfare of SC-STs in J & K or even question why after 70 years the lot of Kashmiris haven’t improved, then it’s legitimate to ask: Who are you speaking for?