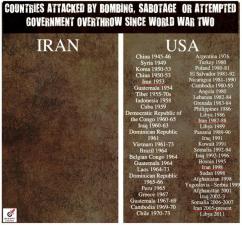 United States keeps harping “on the gravest threat to world peace” if Iran is to become a nuclear state. The truth, as nearly always, is driven home by the one and only Noam Chomsky in a recent piece. A few of the points from the article are worth our attention below:

Iranians recall that not a day has passed since 1953 in which the US was not harming Iranians.  When the Shah was overthrown in 1979, Washington threw its lot behind Iraqi leader Saddam Hussein who would in 1980 launch a war against Iran.  After the war, President George H.W. Bush even invited Iraqi nuclear engineers to the US for advanced training in weapons production, an extremely serious threat to Iran. Sanctions against Iran were intensified, actions were initiated to bar it from the international financial system In recent years, the hostility has extended to sabotage, the murder of nuclear scientists, and cyber-war.

Indeed, under the Shah, top US officials—Dick Cheney, Ronald Rumsfeld and Henry Kissinger—were urging him to proceed with his nuclear programmes. Asked later, why he supported such programmes under the Shah but opposed them more recently, Kissinger responded honestly that Iran was an ally then!

Why then such blatant disregard for truth? Under the Clinton Doctrine, the US was entitled to resort to the “unilateral use of military power,” even to ensure “uninhibited access to key markets, energy supplies and strategic resources,” let alone alleged “security” or “humanitarian” concerns.

Meanwhile, the crowded field of presidential candidates in the US elections are going berserk. Senator Ted Cruz, considered an intellectual, warns that Iran someday could set off an Electro Magnetic Pulse that “would take down the electrical grid of the entire eastern seaboard” of the United States, killing “tens of millions of Americans.”

The stifling Saudi Arabia, which makes Iran look like a virtual paradise; and Israel, with its vicious crimes in Gaza and elsewhere, are trying to teach that country of good behaviour.

The rogue states that rampage the region don’t want any impediment to their aggression and violence. Saudis invade Bahrain (to support the crushing of a reform movement there) and now a murderous assault on Yemen, accelerating a growing humanitarian catastrophe in that country.